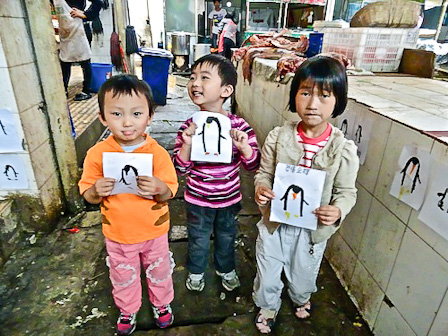 If you want one of Liu Yu's pristine, plastic-wrapped textbooks, you'll have to let him pay you for it.

Approximately 30 years younger than any other vendor, artist Liu doesn't exactly blend into the wet market surrounding him. It's a Wednesday afternoon, nearly 5pm, and to Liu's great surprise, he still has seven textbooks left to sell.

The books are laid out in geometric precision on the table in front of him. They are a marked contrast to the sprawl of eggplant and bitter melon to his left. Passersby glance nervously at the notebook marked with his asking price, which he has propped up on a pile of lettuce. More often than not, they scurry away in confusion. The price tag reads: -10 yuan. 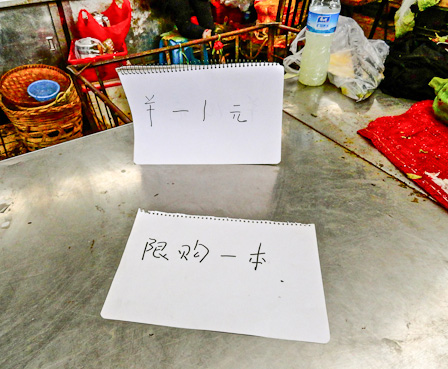 Liu is one of twelve participants in an art event that took place last week in traditional markets around Kunming. Organized by two Chinese and two American curators, the Kunming Markets project seeks to plunk contemporary art down in an atypical milieu. It brings artists working with several media into contact with a demographic more familiar with hongchaorou than the works of Robert Rauschenberg.

Kunming Markets was conceived as an exploration of how China's rapidly evolving economy and cultural norms have influenced both its traditional markets and its art. It challenges artists to create work that was interactive and site-specific. 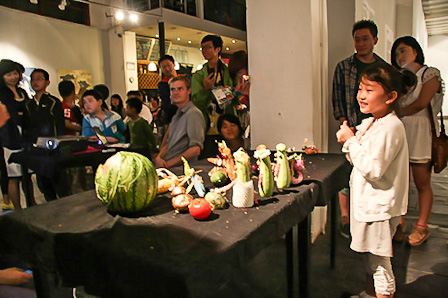 "If art does not relate, it does not communicate," declares the online project statement. An opening at TCG Nordica introduced the project to the public and curator Luo Fei explained the project's rationale: "I think it's good to give art back to the people. Otherwise you're just in a white cube with well-educated people."

And what better place to interact with a cross-section of China's people than at its markets? "Historically, markets served as an all-purpose community center," says co-curator Orion Martin. "Now, they face competition from supermarkets, but they remain important to the city both economically and culturally. It's a great chance to reach an audience that has never thought about contemporary art."

The opening night was attended almost exclusively by Chinese. Children fidgeted in obedient silence as artists described their work. Each artist has approached interacting with the market differently — some preferring to court the public's curiosity from a table where they've set up shop, while others chose to wander the stalls. 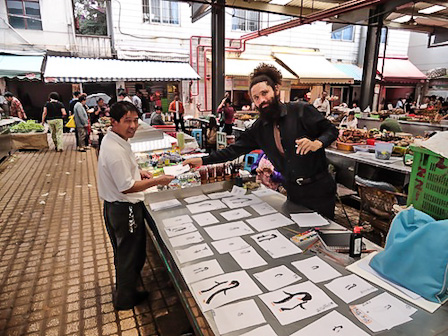 One artist painted sad-looking penguins and handed them out to passersby as means of sparking conversations about global warming. Another amassed a small apothecary of seemingly empty bottles with his daughter. Each contained the scents of different market produce. There are also carved watermelons and other vegetable sculptures that packed a lighter conceptual punch but delighted the kids nonetheless.

Then there is Liu's project, in which he began the day selling his books at exorbitantly high prices and gradually reduced the price into the negative. This was his reflection on the commercialization of education and thought.

"The curiosity of the people in the market towards my piece was very different, especially from those of us who are online all the time," Liu admits. "If we see something like this, we snap a picture and stick it on Weibo, but older people are much less willing to approach." 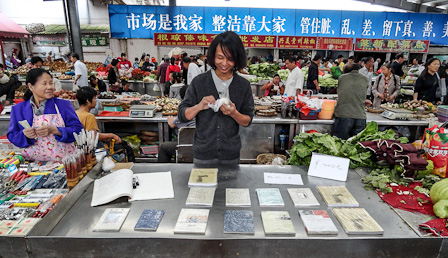 Expecting a scramble for his books as the price hit zero, Liu was amused by how people were in fact more likely to keep their distance as prices became nonsensical. "I like that feeling, that hesitancy people have. That is China."

Back in 2006, Kunming attracted more events like Kunming Markets, which sought to break art out of its usual wine-sipping, white-walled gallery context. Over the course of a year, a series of art events called the "Jianghu Project" took place on streets, in bars, on mountaintops, and at other non-traditional spaces. It eventually garnered national attention from art critics and became one of the year's best-received projects. 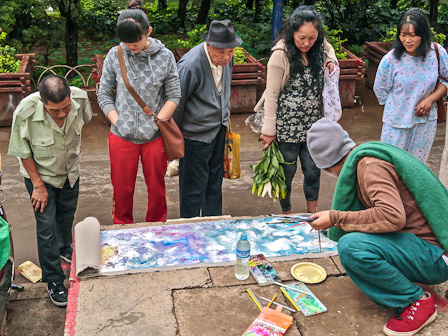 Since then, however, the Chinese art market has heated up. A voracious Western appetite for Chinese works has persuaded many artists to focus on sellable pieces rather than experimental work.

It is just this shift away from the experimental and towards the profitable that Kunming Markets sought to counterbalance. Many of the works focused on one-off verbal exchanges or were made from organic materials that have since decomposed. Vanishing not long after their creation, they could not be monetized. In many cases, shoppers would not have labeled the artwork "art" at all. By designing pieces whose value lay in the interactions they generated, the "Markets" project was an attempt to expand Kunming's definition of artistic practice. Appearing in a flood of sad penguins and leaving only a pile of watermelon rinds in its wake, it introduced small moments of astonishment into a context governed by routine.

"At least something happened," says Luo Fei. "When something unusual happens, you realize that what's set in stone can be different. With the daily schedule of the market, there are usually no surprises. With artists present, there are big surprises. A paper becomes a game. A watermelon you see every day becomes art. I think that's important."

A nice, interesting article. Thanks.