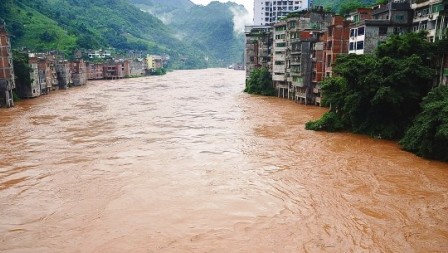 Over the weekend, torrential rains in northern Yunnan led to flash floods that toppled buildings, destroyed crops and killed at least six people. The flooding has been exacerbated by exceedingly dry conditions caused by a three year province-wide drought.

In addition to the six deaths, several people have gone missing or have been injured. The rains have caused an estimated 49 million yuan (US$7.7 million) in damages, InKunming is reporting.

Zhaotong prefecture (昭通郡) in northeast Yunnan was especially hard hit by repeated downpours. The remote prefecture is home to roughly five and a half million people, 130,000 of which have been left homeless by recent rains. The area is one of Yunnan's poorest and is often beset by flooding and landslides.

The long-running drought in Yunnan has created parched farmland that is unable to support crops or properly drain rainwater. In drought conditions the soil clumps together into hard-packed chunks that are unable to absorb precipitation.

When heavy rains fall on drought-stricken areas, flash flooding often occurs. The sunbaked soil functions more like rock than earth, causing the water to pass over the ground instead of soaking into it.

The weather forecast for Yunnan does not bode well for areas already dealing with too much rain. The Chinese Meteorological Administration (CMA) is warning that a massive storm system that inundated the Beijing metropolitan area with upwards of 45 centimeters of rain and killed at least 37 people is moving west.

Forecasts by the CMA are calling for 10-16 centimeters of rain in Sichuan and Yunnan over the next several days. The Chinese State Flood Control and Drought Relief Headquarters is bracing for more flooding after 4,300 people nationwide have gone missing or are presumed dead following recent rains.

The typhoon Vicente that hit Hong Kong on Monday is currently passing through the North of Vietnam and is weakening to a tropical depression, Ttoitrenews is reporting. The strongest tropical storm to have hit southern China this year is expected not to affect Yunnan.