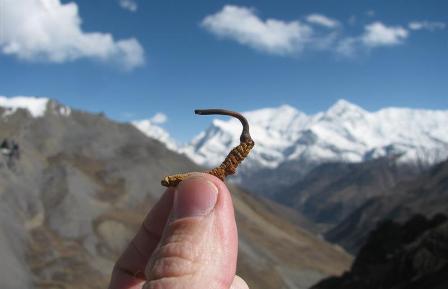 Western countries are still suffering from the effects of intense housing bubbles and four years ago China's Pu'er tea market crashed after speculation drove prices to unsustainable levels. Now Chinese herbalists are riding high on the strangest bubble yet — a caterpillar fungus bubble.

Prices for the fungus Ophiocordyceps sinensis have hit record highs on the mainland. The Traditional Chinese Medicine is currently selling wholesale for up to 382,000 yuan (US$60,000) per kilogram, The Wall Street Journal is reporting. The fungus is worth more than two and a half times its weight in gold.

Demand for the ingredient, commonly known as Cordyceps in the West and dongchong xiacao (冬虫夏草) in China, has risen to unprecedented levels after experiencing a resurgence as a cure for impotence.

Cordyceps has a long history as an aphrodisiac and has been discussed in Chinese and Tibetan medical literature for at least 500 years. The fungus is now being billed as the Tibetan alternative to Viagra, or as a natural aid to sexual performance in men.

The caterpillar fungus has also traditionally been prescribed in China as a stimulant to people suffering from low energy levels and fatigue as well as a palliative for cancer. Now sold as a dietary supplement worldwide, Cordyceps first gained notoriety in the West in 1993 when three Chinese distance runners taking the fungus shattered records at an international track competition in Stuttgart, Germany.

The fungus enjoys a parasitic relationship with the caterpillar Thitarodes, which lives at elevations above 3,000 meters. The caterpillar is native to Yunnan, Qinghai, Tibet and Sichuan, as well as Nepal, Bhutan and India. On the Chinese market, Tibetan varieties fetch the highest prices.

The relationship between Cordyceps and Thitarodes is a bizarre one. Fungal spores invade the subterranean host caterpillar via a process scientists still do not understand and spread throughout its body.

Fungal mycella, or fruiting bodies, eventually pervade the caterpillar's entire body, killing and mummifying it. After the caterpillar dies, a mushroom slowly emerges from its head. The mushroom grows until it extends above ground where it can spread its spores and repeat the process.

Relative scarcity of the fungus has been caused by several factors, according to The Wall Street Journal report. Populations of Thitarodes have been on the decline while world demand has increased. Prices for the fungus have also led to market speculation and hording, further driving up value.