Kunming to Laos by bike: Part I 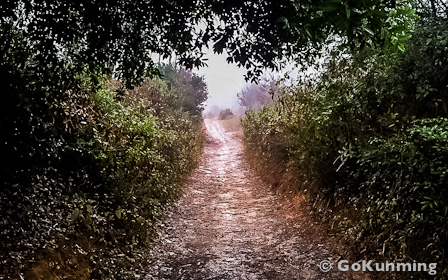 Van de Moortel decided to avoid highways and instead made his way south on small back roads and paths. Below is part one of a condensed four part travel diary he wrote while traveling through Yunnan toward the Lao border. His entire blog of the journey, including getting from Kunming to Yuxi can be viewed on the website crazyguyonabike.

I've never spent as much time on a bicycle, and never so little money in a day. I'd miscalculated my route out of Yuxi, lost my way a million times and almost fell off a mountain.

But let's back up a little. Five minutes after strong winds and dark clouds blotted out the blue sky, rain started sprinkling down on me and altering my mood. By the time I reached my first goal in Xiaojie (小街), I was soaked and my legs had regained the same muddy hue they had the day before.

I took shelter from the rain in a noodle shop whose owners were excited to see a foreigner. We chatted for a bit and I showed them a five Euro note. Suddenly the noodles were free. I made the mistake of asking my new friends for directions to Shiping (石屏). Seconds later, half the town had gathered around me in heated discussion and I recklessly told the crowd that I could find it myself and made for the river. 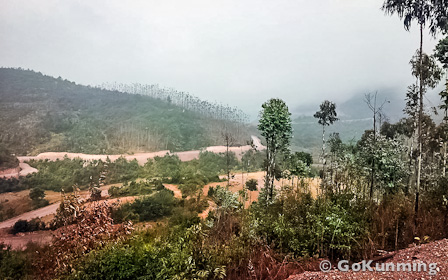 I rode through the back of the village, across the river and cut through some fields. Minutes later I was on a muddy mountain trail full of big, wet rocks. Despite the load from my panniers, my rear wheel slid and skidded as I tried to push up the hill.

Passing farmers asked me where in heaven's name I thought I was going. Shuanglong (双龙) rang a bell for some, but others had never heard of the place. It was all very comforting.

The trail had a myriad of unmapped forks that may or may not have lead to certain death. I started to think of the ride as jungle blog 2, a previous journey, but with pine forests instead.

My no-turning-back mindset meant there was only one way: forward. This attitude had gotten me into trouble before so I regularly checked my GPS to ensure I was still on track. Often I wasn't. I got the sneaking suspicion I'd have to sleep in the woods that night. In the wet, rainy woods. 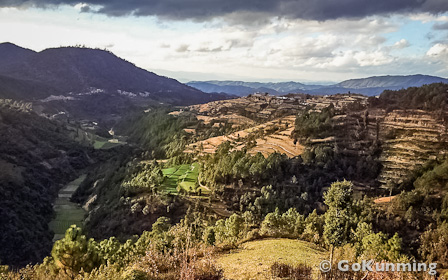 The weather remained unfavorable, but when the sun pierced through the clouds or even swam in a little pool of temporary blue, the views were soothing. I climbed and climbed, rode down occasional and unrewarding stretches of barely passable roads and finally reached a small village.

An elderly woman with teeth as colorful as her minority dress did not respond to my inquiry about directions to my next destination, Longwu (龙武). I jumped in front of her to attract her attention. Not startled at all, she crowed in amazingly clear Putonghua that she was deaf. That explained it. 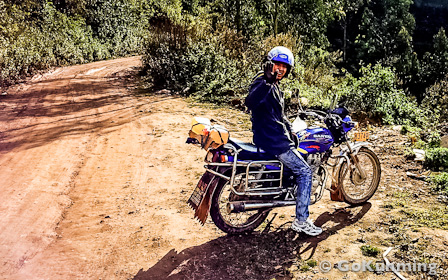 In Longwu, the last landmark some 30 kilometers before the end of the horrible road, I asked two guys on motorcycles for directions. They sized me up, eyed my red-beige-black legs and then announced they would pull me up the hill. I declined. They insisted and I declined again. They insisted once again and offered me a cigarette.

I couldn't turn them down again so I decided to take the offer to be pulled up the slope to Potou (坡头) in favor of not smoking. The rope broke twice and I told them not to wait for me, that I could get there by myself. They declined. I insisted. They declined.

An hour later they guided me to a cutout on the mountain where a dozen tables were set up. My guides informed me they were Yi people and wanted to welcome me to their grand-grand-nephew's fifth birthday party. 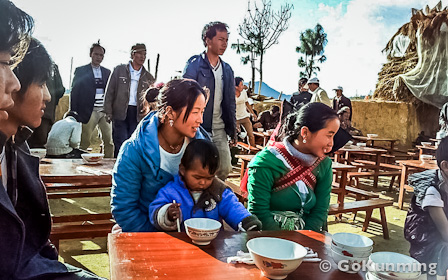 Fourty-odd people were staring at me but food and baijiu helped me quell my nervousness. I shared a table with my two friends and their wives. They were all colorfully dressed and sported a kid on the arm or in a basket carried on their back. I ate, drank and talked a bit with everyone.

Afterwards they set me free, even though I thought they had said they were going to host me for the night. Maybe they had changed their minds, or had simply been reciting a poem. Who knows?

Only 15 kilometers remained to Daqiao (大桥), but night fell quickly and the road was rough. Five kilometers before Daqiao, it changed into a tiled road and I could only freewheel down. 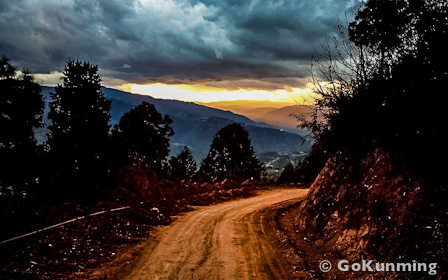 I found a bed for 20 yuan, took a cold shower and warmed myself with a giant thermos of hot water. I contemplated throwing myself into Daqiao's nightlife — which appeared to revolve around the sound system on a motorcycle outside — but collapsed into bed before I could put the thought into action.

At 7:45am I was impatiently pacing near the hotel door, hoping to wake someone up who would open the gate for me. At exactly 8am a man came in, yawned a big yawn and opened the door to where I left my bike. Mud had clogged the disc breaks and dried out the chain and gears. Everything else was plain ugly or sheer ballast. I decided to wash it off at the next opportunity. 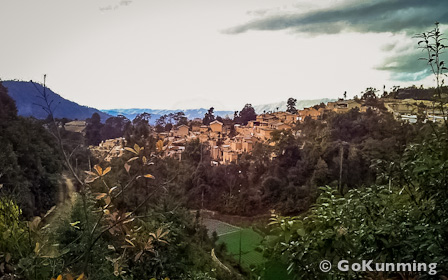 No one in town had bothered to get up so I planned to have breakfast in Shiping, 26 kilometers up the road. Getting out of Daqiao was done by means of a long climb and my legs already felt powerless from the previous day's ride.

I pulled over for a sugary drink and talked a bit with the shopkeeper. She claimed she saw two people from "my country" a year-or-so ago, "my country" meaning somewhere outside of China.

The sun broke through the clouds and a quiet and smooth road led me into Shiping. An enormous bowl of thick noodle soup with tofu came served with a chat about local minorities. My bike got a rinse and I continued with refreshed courage. 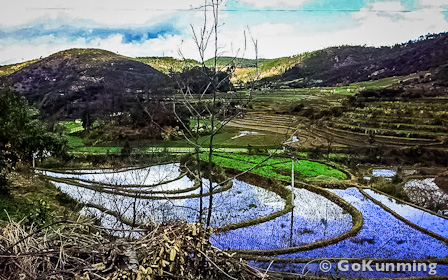 A gentle breeze pushed me along a quiet road by an old railroad north of a lake. Later the impressive but still distant Double Dragon bridge (双龙桥) welcomed me to Jianshui (建水). At the market I bought stinky tofu (臭豆腐) and noodle soup and skipped Jianshui Old Town. I already visited the last time and couldn't afford to lose much time.

Surrounded by coal plants, I battled a joint venture of sun and headwind while approaching my first serious hill. It was hard, but not as hard as I thought it would be.

The biggest bummer on this part of the trip was the lack of fruit. When I came down this mountain in June 2011, I had the juiciest nectarines and all kinds of fruits I was unfamiliar with. None of that now — only the hills. 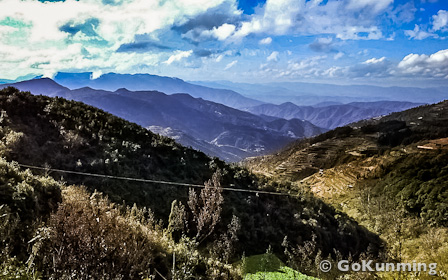 After the first few climbs, the big ascent finally arrived — 18 kilometers to the top. It was not such big a deal as I had remembered. I recognized a dog that chased me up the mountain last year. I sped up and chased the dog a fair bit downhill until it jumped away, missed a ditch and rolled over before it got back on its feet. I left it panting in an imaginary cloud of dust. Revenge was sweet.

The downhill side of the the mountain could've been fantastic if it weren't for the terrible road conditions. Pits and cracks and chunks where the asphalt was gone were replaced by gooey mud. Trucks with water-cooled brakes had caused holes packed with dirt to turn into mud traps. 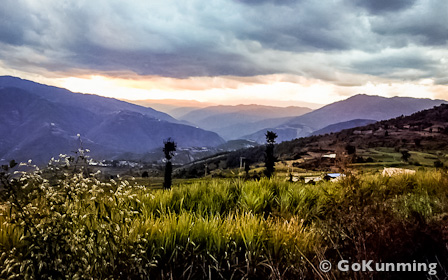 Halfway down the slope a long line of cars signaled trouble ahead. A lorry had sunk through its chassis and was blocking the road. A colourful ensemble of ethnic minorities sat around waiting while everyone else tried to turn around on the very narrow and steep road. I was only just able to squeeze through.

The rural traffic jam behind me, I couldn't help but be amazed by the abrupt changes in climate along the route. The north end of the mountain has been arid, with red soil and eucalyptus trees.

On the south end, those were replaced by brown dirt, banana and lychee trees and thicker and greener vegetation. Not only had I moved to another valley and plunged to about 200 meters above sea level, I had also crossed the Tropic of Cancer and was officially in the 'tropes.

how did you find the route? did you talk to people who had done the ride before or just looked at maps or GPS?

Thanks! I found the route by looking at the map and my Google Maps application.

The sixth picture is so beautiful!