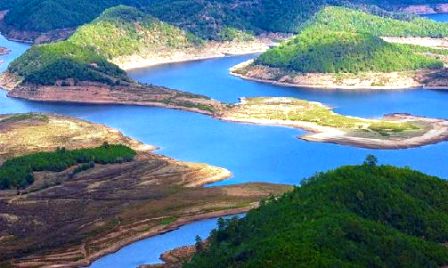 Recent rains in the Spring City have eased pressure on local water supplies, but a look at statistics released by the provincial government shows that Kunming's drought is far from over.

In relatively good news, the water level in Qingshuihai Reservoir (清水海) has stabilized. Water flowing into the reservoir from streams and runoff is now equivalent to water going out. It was losing five centimeters of depth per day as recently as April 1.

Less encouraging is a government report concerning Yunlong reservoir (云龙水库), which supplies Kunming with 70 percent of its water. Built five years ago, the reservoir inundated several small villages as it was filled to capacity.

The lake's water levels have dropped so significantly during the drought that buildings from the submerged towns are again visible and locals are scavenging metal from them. Water levels have dipped 33 meters to a record low and are dropping an additional 15 centimeters each day.

According to the same report, Songhua Reservoir (松华水库) has water levels 25 meters below normal and is losing two centimeters of depth each day. The lake supplies Kunming with 100,000 cubic meters of water daily and over the past two years has only received half its normal input.

The ongoing three-year drought has led to conservation measures such as lower water pressure and rolling water blackouts around town.

Government officials are suggesting the modest austerity measures may not be enough to cope with population growth in the city and are asking residents to do their part to conserve water. Kunming uses an average of 766,000 cubic meters of water each day.

766,000 cubic metres of water a day...
Say 7,660,000 residents (roughly to make calculation easy) = 0.1 cubic metres of water per day or 100L per resident. By western standards, thats pretty good for a city (which of course includes industry water usage etc). But of course it could be better (how many people would use anywhere near 100l? For myself it equates to around 20-40L including a shower!).

The average for China for all water use is 700 m3 per person or roughly 2 m3 per day, but that includes agricultural users who are providing us city people with food which requires lots of water. Probably the biggest impact you could have for reducing your water consumption is: eat less meat as it requires so much water to grow, particularly beef. However that is indirect consumption so much less measurable than direct water savings.

I went up to the roof of our complex a while back. 2 of 6 solar water tanks had pretty leaky pipes. I think your figure of 20-40L is right. The other 60L+ is waste cause water is too cheap and will remain so despite a drought.

True, agriculture uses about 70% of the world's water, but factories make up a large portion of the remaining 30%. So cutting personal use unfortunately has little overall impact. Every Chinese is responsible for the consumption of close to 2000 liters of water per day when everything is averaged together, but that's still way lower than much of the modern world. Eating less less meat, especially beef, is definitely the best way we have to conserve water as individuals. It takes about 13,000 liters of water just to produce one kilo of beef.

You can all check how much water you are using by looking at your water bill: a cubic meter (=1000l) of water costs 3.45Y, so if your bill comes to more than 10Y per month per person you are using more than 100l per day.

Even on our half-day rationed water in our flat, we still managed to use about 70l per person per day in April/May. We blame the cleaning lady.

If you use more than so much a month they double the rate. I believe the it's 10 "units" where each unit is 10,000 l, but I'm not sure. You can go look at the water bills posted and see that those who use more than 10 units a month are much more than others.

"The lake's water levels have dropped so significantly during the drought that buildings from the submerged towns are again visible and locals are scavenging metal from them."

Are you serious, eat less meat? Where have you been eating, Brazilian barbecue restaurants? Almost all of the population in China already eats the standard big rice bowl with traces of meat. Not a sound advice there buddy. I lift weights and will stick to my 300 g/day of protein. Thanks for going vegan to compensate for my muscles.

That's for AlexKMG and blobbes. Sorry I don't say you're smart for pointing out that meat indeed takes a lot of water to produce, I've learned this when I was on 6th grade.

Come on, if water is to be saved, shouldn't we instead stop the wasting in other non-essential activities, like the average chinese joe washing his overpriced car 2 times a week?

Meat is nourishing, loaded with protein, vitamins and minerals, using the drought to promote vegetarianism or reaching the conclusion that the best way to save water is decreasing the consumption of meat in a country that already has a minimal consumption is bullshit.

Easy there, bro, I don't think anyone's trying to take your meat away. No one even mentioned the word vegetarian. But the fact is that choosing chicken or fish (or vegetables) over beef will conserve far more water than cutting out car washes or halving shower times. And if you are a serious body builder, you know there are equally good, and arguably better, sources of protein than beef. Not to mention that fact that arguing against water conservation for your own muscle admiration is rather disingenuous.

@Spartans
I made one comment about leaky pipes. It's pretty hard to argue against fixing leaky pipes. If you fix enough leaky pipes to compensate for meat consumption, I'll regard your comments in higher esteem.