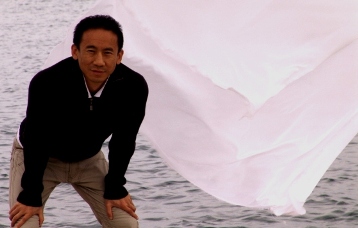 After first taking hold in Shanghai and Beijing, yoga is quickly gaining in popularity in cities throughout China. China's growing interest in yoga is becoming a big business nationwide and even beyond - the Indian government recently named yoga holidays one of the top draws for Chinese tourists to India.

Today more and more yoga studios are opening in Kunming as locals with more disposable income are becoming increasingly health conscious. Kunming native Yu Tao (余涛) is the founder of the city's oldest yoga studio, Yutao Yoga, which has been open in downtown Kunming for five years. A member of Yoga Alliance who has taught thousands of students over the past six years, Yu Tao has seen Kunming's yoga scene develop from the beginning. GoKunming sat down with Yu Tao to find out more about yoga in the Spring City.

Yu Tao: I like doing things related to the body and health. I had many different jobs before that I felt were meaningless b/c I'm a little more spiritual. I feel like right now we're just building bigger houses and consuming the earth's resources. I did volunteer work for Medicins Sans Frontiers and Habitat for Humanity, I didn't have any income for like three years. When I did get income, I traveled and ended up meeting some yoga teachers and started to practice yoga. 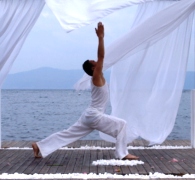 Before I went to India I didn't know anyone, I was just told to go to a certain hotel and a certain city, and I went. I stayed in India one year, during which time spiritually I gained a lot. That experience made me a better channel for spreading the tradition of yoga.

GK: How would you characterize your studio's average client?

Yu Tao: They're the so-called white collar class. They have a medium income and maybe spiritual expectations and pay attention to quality of life. Some rich people cannot come and practice yoga, it's torture for them. They'd rather get massaged. For this you have to work hard and experience pain before relaxation.

Some of our current students have been studying at our studio for more than five years. Some do it for three months then quit, but usually they stay with us for one or two years.

GK: What benefits have you seen in your long-term students?

Yu Tao: People tend to improve their bodies, especially neck pain, digestion and breathing. Most find that they feel more fit than before.

Physical improvements aside, students have tended to show improvements in their mental well being, energy and eating habits

GK: What is it about Kunming that keeps you here rather than teaching in a bigger city?

Yu Tao: I have a very good level of students - it's my responsibility to stay here. I've been invited to teach in Beijing to do a kind of yoga franchise but refused the offer because yoga isn't McDonald's. It can't be copied like that.

Our studio is the oldest in Yunnan. Some studios have opened for a few months then closed. I'm not a business person and we've had little investment but we've survived. We've been lucky and also have provided yoga to clients according to their needs.

GK: What future plans do you have for your studio?

Yu Tao: Yoga is only a start for me - I'd like to build a health-oriented platform. By doing yoga you can't make a fortune. I want to do things related to yoga and expand into health-related ventures that encourage a healthy diet and create an integrated wellness center.

Now Kunming is following Beijing and Shanghai, which are following the rest of the world. Kunming will become more international, there will be more work and pressures, so people will need it. And with the economy growing so fast it is important to attain balance.

Hi, Yutao, it's very interesting to know more about you this way, throught your online interview. i will definitely visit your studio soon. ^_^

I've visited the Yutao Centre & they have good facilities. But Shanti Yoga is worth checking out. (www.xtyoga.com - unfortunately Chinese only)

I suspect the facilities aren't quite as good (eg no showers in male changing rooms) & it's quite new, so the teachers probably aren't as experienced as at Yutao. The teachers I've had have been good though & it's up to 60% cheaper.

I am surya from india.I will be coming kunming around this week.
I need to find a job as a yoga teacher in kunming.

Please recommend me as soon as possible.

i'm a yoga enthusiast in kunming.have been practise 4years.some information share with u,hope it's useful.
direct call the studio u really want teaching for.it is the best way in here,eg.fashion yoga in green lake\yutao yoga at tianhao building or someothers.
good luck!

hi, nameste,my name is arvind i am a yoga teacher . i have a 8 year experience teaching yoga, and one and half year teaching experience in shenzhen china . presently i am in china and i can teach all kinds of yoga i am looking for a yoga teaching job,my phone -13128992865,please if you have any information so plaza let me know regards
arvind