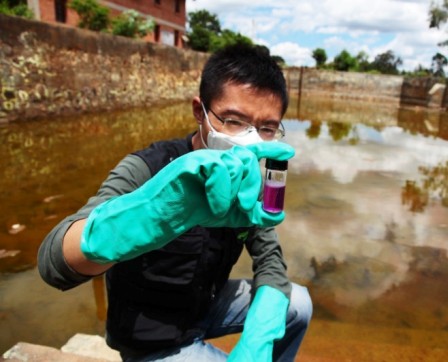 A lawsuit initially filed last year in Qujing is set to test current environmental law in China. Pre-trial discovery was conducted on June 5 in a case that could change national legal precedents concerning who can initiate legal action in pollution disputes.

Two Chinese non-governmental organizations (NGOs) have filed what Xinhua News is calling a landmark lawsuit against companies that produced and improperly disposed of toxic waste.

Friends of Nature and the Chongqing Green Volunteer League are supported by the Qujing Environmental Protection Bureau as plaintiffs in the case. They are suing Luliang Chemical Industry Company Limited and Luliang Peace Technology Company Limited.

Hearings on the lawsuit officially began Wednesday in the Intermediate People's Court of Qujing. The plaintiffs are seeking a combined 10 million yuan (US$1.58 million) in damages. They plan on using any money they are awarded to establish an environmental fund dedicated to further cleaning up the dump site.

The case is not considered groundbreaking because of the damages sought, but because it is China's first public interest litigation lawsuit (PIL) filed by NGOs. In countries with established PIL procedures, any public group or individual can file a lawsuit and does not need to involve the aggrieved parties in the judicial process.

Under current Chinese Civil Procedure Law, NGOs without government backing are not allowed to file environmental lawsuits, making cases like this one rare. However, Xinhua is reporting that plaintiffs are supporting their case with a 2011 National People's Congress draft report. The report stated:

Legally registered organizations and social groups are entitled to file lawsuits in instances in which polluting the environment or other behavior infringes on the public interest.

The lawsuit stems from an incident in 2011 where truck drivers were paid to transport 5,000 tons of industrial waste from Qujing to Guizhou province. The contractors instead dumped the materials outside the city near Chachong reservoir, not knowing the waste contained large amounts of carcinogenic hexavalent chromium.

The toxic waste leached into the reservoir after heavy rains and has been blamed for the deaths of 77 livestock in the area. Water from the Chachong reservoir feeds into the China's third largest waterway, the Pearl River.

This will be a very challenging case, as the plaintiffs must prove that the two chemical companies KNEW or were complicit in the dumping. However, according to the article, the truck drivers were dumping the chemicals illegally to increase their profit (avoiding the long haul to Guizhou).

This is probably more an issue of "end-to-end" responsibility, where the truck drivers should have been paid upon delivery to the end point (with the appropriate delivery paperwork), as opposed to being paid upon pickup.