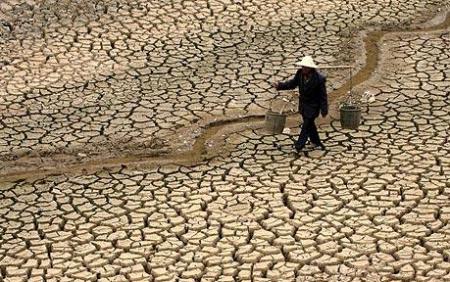 In response to the area's increasing water scarcity, the Kunming government has announced that areas of the city will experience rolling water 'blackouts' through the end of May.

City officials have scheduled water outages to conserve water and to give maintenance crews time to repair leaking pipes, Yunnan Net is reporting. Residents and businesses in affected areas can expect water to be turned off completely from 8am until 6pm.

Water rationing began on a much smaller scale in February when water pressure around the city was reduced for 20 hours each day to limit consumption.

Kunming has been gripped by a drought for three years and municipal water supplies such as rivers, lakes and reservoirs have been progressively shrinking.

Yunlong reservoir (云龙水库), located 100 kilometers north of Kunming in Luquan Yi and Miao Autonomous County (禄劝彝族苗族自治县), provides the city with 70 percent of its drinking and irrigation water. Although it has the capacity to hold almost 450 million cubic meters of water, the reservoir is currently running dry.

Overall, Yunnan's rivers and watersheds are 31 percent lower than average and 673 reservoirs in the province have no water, according to recently released government data. Shortages have affected an estimated nine million people in the province this year.

A provincial government report, that refers to Kunming's water situation as "grim", has issued water conservation protocols to businesses throughout the city. Failure to comply with the new guidelines can result in fines ranging from 30-30,000 yuan.

A water rationing schedule listing dates and affected areas in Kunming is also included (in Chinese) in the Yunnan Net report.