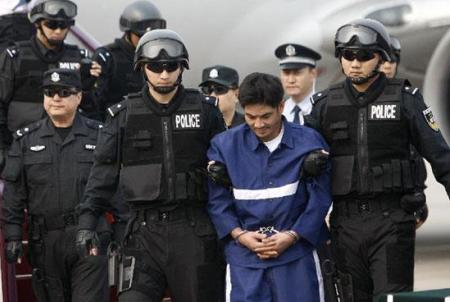 A Burmese drug lord suspected of ordering the killing of 13 Chinese merchants near Chiang Rai, Thailand last year has been captured and extradited to China.

Long associated with organized crime in Southeast Asia, Naw Kham (aka Jai Norkham) was arrested along with six associates in Laos' Bokeo province in late April. He was handed over to Chinese authorities May 10 before being flown to Beijing on a chartered plane, People's Daily is reporting.

Naw Kham is thought to have planned the October 2011 killings of Chinese sailors on the Mekong River. His gang has also been linked to a separate series of extortion, murder and drug cases in the Golden Triangle dating back to 1996.

After facing questioning in Beijing, Naw Kham will be transferred to Yunnan, presumably to stand trial. No specific charges have yet been announced.

Thai river patrols captured the ships after a 30 minute gun battle with the pirates and discovered 920,000 methamphetamine pills worth 20 million yuan (US$3.22 million). Thai authorities believe the hijackers were using the boats to smuggle drugs further south into Thailand.

Naw Kham was implicated by the Thai army shortly after the killings. The militaries of China, Thailand, Laos and Burma began joint naval patrols of the Mekong in response to the murders.

A spokesman for the Chinese government credited enhanced cooperation between the four countries for Naw Kham's capture.

Good news! Hopefully with the increased co-operation between regional countries criminal activities will decrease in the region. Tourism is the main money earner in the Golden Triangle region and I certainly don't want to hear about more indiscriminate killings like the ones this guy committed.

Well, technically the drug trade may be the main money earner in the GT region, but tourism is the main LEGAL money earner!