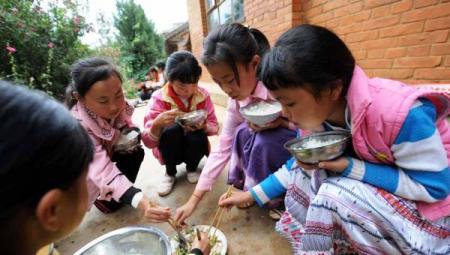 A recent string of school food poisoning cases nationwide, including at least three in Yunnan, has focused government attention on the safety of a national school lunch program, China Daily is reporting.

Public schools across China have been participating in a 16 billion yuan (US$2.5 billion) government pilot program that pays for lunches. The program was instituted in the fall of 2011 in 690 counties across the country and affects 26 million students, 350,000 of whom live in Yunnan.

Schools in poor areas participating in the program are given three yuan per student per day to pay for school lunches. The money comes with no health and safety guidelines and rural schools often operate canteens that are unlicensed by local health departments.

In mid April an elementary school in Zhenxiong county, Yunnan sent 368 students to the hospital with food poisoning in a single day. A government investigation has since found that the children were given food that was possibly rotten.

Students released from the hospital told reporters they were forced to eat 'black, bitter peas' or face a 10 yuan fine from their school, according to a report by People's Daily.

That case followed similar incidents in Xuanwei (宣威) and Luxi (泸西) in Yunnan. Students in those areas were sickened from consuming spoiled eggs and milk.

In a May 3 interview with China Daily, the deputy director of schools for Zhaotong prefecture, Yunnan said:

To be frank, most school kitchens in my district can't meet the hygiene standards. Some don't even have kitchens. Even at schools with kitchens, the space is rather small. Some don't have refrigerators, and the education bureau doesn't have the money to buy them one either.

The only practical measure for us to enhance school food safety is to provide physical exams and cooking training to kitchen staff, who are in fact teachers voluntarily cooking for the children.

While the government initiative is meeting with increased media scrutiny it has been beneficial to some pupils and their families. A third grade student in Yunnan, also interviewed by China Daily, said if not for the stipend her family would spend roughly half of its 2000 yuan annual income paying for her school meals.

In my experience, having taught in Zhaotong prefecture, the Education Department would have plenty of money for refrigerators if they spent a little less on banquets...

Very happy that poor kids are getting a free meal at school...Very sad they are forced to eat spoiled food at times.

I think the children should be given 3rmb food vouchers to be spent with the local chefs and vendors outside the school. No more troubles for the schools to operate a kitchen, and the children can decide with their pocketbook (aka vouchers) which vendors food tastes best. If no food vendors can make decent food for 3rmb per child, then the gov't knows why the schools are forced to use rotten stuff at times.