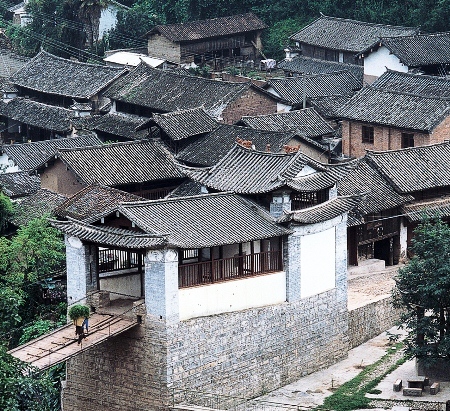 Yunnan has long been one of China's most appealing and popular travel destinations, but few English-language guidebooks have focused exclusively on the province.

Guidebook publishers such as Lonely Planet and Rough Guide have produced southwest China travel guidebooks that lump Yunnan together with Guangxi, Guizhou and Sichuan. The Yunnan chapters of these book usually only manage to scratch the surface.

Yunnan - China South of the Clouds by Jim Goodman is the most in-depth English-language guidebook about Yunnan that we've found. It is an updated version of Goodman's The Exploration of Yunnan, first published in 2001 by Yunnan People's Publishing House. The newest edition, now published by Odyssey Books, has added maps and an index – the most glaring omissions in the original book. 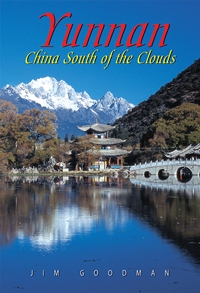 The target audience of Yunnan – China South of the Clouds is travelers who are concerned with getting a deep understanding of Yunnan. The book is different from traditional guidebooks in that it doesn't focus on venue listings or how to get around. It is an ideal resource for deciding where to go and what to seek out, but cannot help travelers decide much in the way of where to stay and eat. For travelers who cannot speak Chinese, it is probably most effective when used in tandem with a more conventional guidebook.

Goodman excels at providing the reader with a geographical, historical, ethnic and cultural context for virtually anywhere one might travel in Yunnan. His informative prose offers a comprehensive explanation of Yunnan and its diverse destinations and cultures, and allows readers to explore cities and the countryside on their own.

Over the course of 624 pages, 211 photos and 29 maps, Goodman threads together the story of Yunnan, linking events, places and people in a way that clarifies the region's historical narrative in a cohesive and easy-to-understand way. 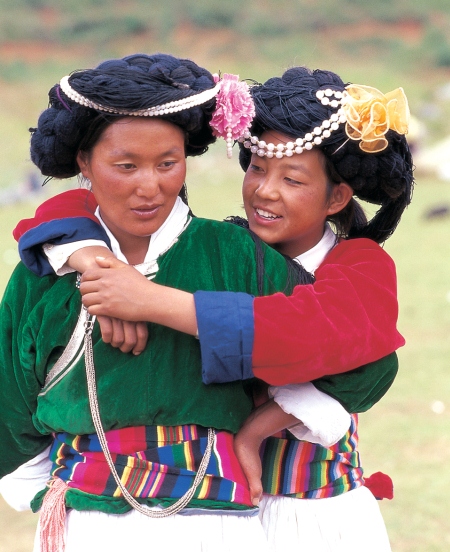 The section "Province of Wonders" explores Yunnan's multifaceted history, people, culture, geography and cuisine. In addition to a good prehistoric overview of the province, Goodman offers interesting glimpses of ancient Yunnan, including the kingdom of Dian and its mysterious successor, Nanzhao:

Chinese observers were naturally curious about Nanzhao's military aspects. The kingdom had a high reputation for its swords and in periods of peace this was one of the most sought-after trade items. From somewhere in the wilderness of Nanzhao came an herb that the troops used to poison the tips of their spears and arrows. They wore armour of elephant or rhinoceros hide. Some warriors tattooed their bodies with magic prescriptions against wounds. Discipline was strict. Bravery was rewarded, cowardice severely punished. Its exact ethnic composition is still not clear and maybe never will be, but this is all the world knows so far about the army of Nanzhao, the country Tang China never tamed and Song China never dared take.

Goodman covers the major historical events that have made Yunnan what it is today, including the conquest of the region by Kublai Khan and his subsequent relocation of the capital from Dali to Kunming in the 13th Century, Du Wenxiu's Muslim rebellion, French and British colonial ambitions, the warlord era of the early 20th Century and life under Communist rule.

In this introduction to the region, it is obvious that Yunnan's main appeal to Goodman is the mindboggling variety of peoples and cultures throughout the province, which manifests itself in clothing, food, festivals, language and beliefs:

What makes Yunnan potentially so much richer a travel experience is the ethnic aspect. Nowhere else offers such a diversity of lifestyles, such a range of ecological responses, such a wealth and depth of culture. Here is the chance to experience several cross-cultural encounters in a single journey, which will etch themselves more sharply in the traveller's memory than the most spectacular scenery. They may even change the way a traveller thinks and lives... for the better.

"Historical Exploration" examines the arrival of outsiders into Yunnan, beginning with the earliest mentions of the area in Chinese historical records. Goodman then turns his attention to expeditions from the West. European visitors in the 19th Century and early 20th Century braved the unknown in Yunnan for a variety of reasons, be they colonial, scientific or evangelical.

Goodman notes the impact of these waiguoren on the region as well as the world's slowly growing awareness of the province. He gives special attention to Frank Kingdon-Ward, Dr Joseph Rock and Peter Goullart. Those three men penned some of the most vivid and enduring foreign accounts of the people and places they encountered, which at the time were almost completely unknown beyond China. 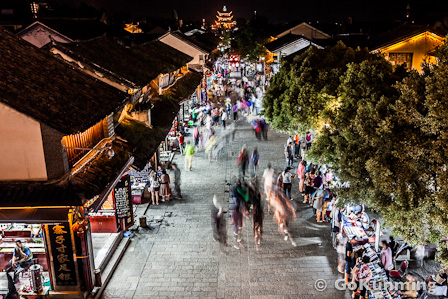 "Contemporary Exploration" may be the shortest section of this book, but it is a unique and occasionally entertaining look at the reopening of Yunnan to domestic and foreign travelers. Goodman, of course, was one of the first Westerners to take advantage of this reopening.

Many critics of tourism in Yunnan depict an industry that exploits local minorities for the entertainment of travelers, especially foreigners. However, Goodman makes a strong case for the province's opening up to the outside world happening at the right time:

It just so happened that, historically speaking, Yunnan opened its doors to tourism and exposed its minorities to non-Chinese outsiders at the moment when the minorities had recovered from the assaults on tradition waged by the Cultural Revolution and other past political campaigns. Economically better off than ever before, with their ethnic pride restored and an attitude towards their own traditions that ranges from respectful to revivalist, Yunnan's minorities were quite ready for the Tourist Era.

Given how developed tourism is in Yunnan, it may be surprising to some that 1985 was the first year under the People's Republic that foreigners were allowed to experience China's most diverse province. Goodman's depiction of the early days of travel in Yunnan for foreigners seems a far cry from the situation today:

Foreigners could roam all over Kunming and, of course, the Stone Forest, but not Lunan town. They could explore Jinghong, but not far beyond, Dali but no other Bai county (not even nearby Eryuan) and Lijiang and Tiger Leaping Gorge, but not Baishuitai just across the Jinshajiang. Outside Kunming, foreigners couldn't even eat where they wished. At Lijiang, for example, all guests were billeted in the No. 1 Guest House and required to dine in the hotel restaurant. Local residents were informed of the restrictions, too, so that anyone who tried to order food in an old town restaurant was politely and apologetically refused service.

In "Beaten Tracks" Goodman offers excellent introductions to Kunming, Xishuangbanna and Dali, as well as northwestern and western Yunnan. "The Unfamiliar" fills in the blanks elsewhere, exploring the Nujiang Canyon, Honghe and Zhaotong.

These two sections of Goodman's book total just under 300 pages, nearly half of the book. Goodman covers every corner of Yunnan and gives every ethnic group and subgroup its moment in the spotlight, highlighting their creation myths, religions, languages, architecture, costumes, cuisines, festivals and traditions. 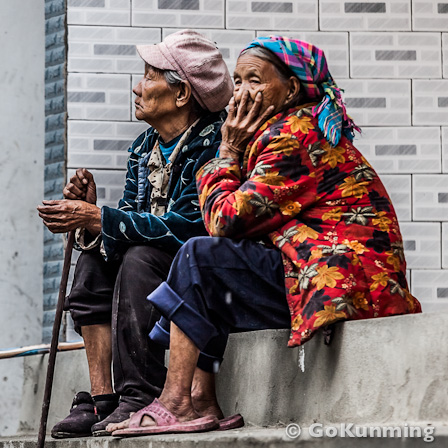 The first half of Yunnan – China South of the Clouds may read like a history book, but the second half justifies the book's classification as a guidebook. By peering through Goodman's lens into different parts of Yunnan, travelers can make educated and informed decisions about which terrain and cultures they wish to explore.

Travelers simply looking to take in as many sights as possible while in Yunnan may not have much of a need for this book. Those interested in a deeper interaction with the province's endless geographical and cultural diversity should find it invaluable in unlocking the infinite discoveries that await them in our favorite corner of China.

Yunnan - China South of the Clouds by Jim Goodman is available in Kunming at Mandarin Books for 210 yuan or online at Amazon.

Just moved to Shanghai with our dog and are heading to Kunming to live for 6 months starting in June.

Saw your article about rabies and dogs in Kunming. Our dog is vaccinated and has a current health certificate so we are ok there.

You said Kunming is dog friendly so we thought we'd ask if you know anything about that. Are there dog friendly parks, places to walk dogs besides the street, bars/restaurants with outdoor seating that allow dogs, etc.

We will most likely stay at a serviced apt we found that allows dogs for a week or so while we look for an apartment or house to rent. If you have any suggestions on dog friendly hotels, apartment, etc. that's great too.

Any info you can offer is great!

Other than the new index and maps, can you tell any major differences between the original "Exploration of Yunnan" and this new edition? Is the content and pictures from the original largely the same?