Recipe: A Yunnanese dinner for two 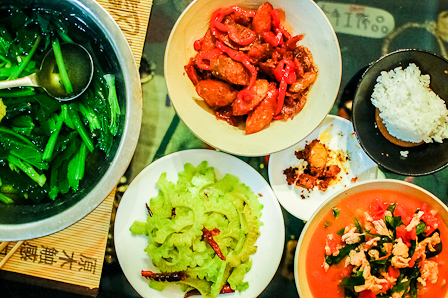 Editor's note: As interest in Yunnan cuisine increases around China and the rest of the world, GoKunming contributor Tom Kirkpatrick will occasionally offer recipes for traditional Yunnan dishes. If there is a certain dish you would like to see a recipe for, please send us your ideas via our contact form.

Much is made of the minority cuisine in Yunnan and rightly so, but the day-to-day fare of many Kunming families is just as noteworthy. The success of Kunming cooking often depends on the freshness of its ingredients and luckily fresh produce can be bought quite inexpensively around town.

These are recipes for four common and easy-to-make dishes. The ingredients can be bought in most local markets and with a little planning and practice an inexperienced cook can take them from chopping board to table in less than 40 minutes.

This will feed two hungry people. If cooking for more, adjust quantities to suit.

All of these dishes can be prepared in a medium sized non-stick frying pan. The pan does not need to be washed between dishes.

Method
Before getting started rinse enough rice for the meal and start it cooking in a rice cooker.

Put all of the fresh ingredients down on a clean work bench and have a large chopping board and three plates ready. Separating the ingredients for each dish onto plates after chopping will save a bit of time later. Don't forget to wash the veggies.

Put the cut sausage on one plate. Cut the red pepper in half lengthwise and discard the seeds, chop the flesh into three-centimeter chunks and put them on the plate with the sausage.

Chop the tomato into similar sized pieces and place on another plate with the sliced pork. Cut the chives into 3-centimeter lengths and set aside with the tomatoes.

Cut the bitter melon in half lengthwise and discard the seeds, then cut crosswise, making thin slices. Put this on a third plate.

On the chopping board, peel the two thumb-sized pieces of ginger (this is best done by scraping the skin off with a teaspoon) and chop one finely.

Peel the garlic and finely dice. Neatly pile the garlic to one side of the board.

Place the desired number of dried chillies (around four) on the board and break them into bits about 4 or 5cm long. 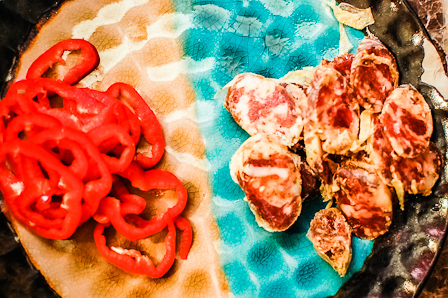 Sausage and red peppers - Hongjiao xiangchang (红椒香肠)
Heat the pan to a high temperature – if a drop of water flicked into the pan will bead and skip across the surface, then the temperature is correct.

Add a drizzle of oil and then the sliced sausage. Fry briefly before turning the heat down to medium. The sausage should be sizzling vigorously but not smoking or burning.

After a minute and a half add the chopped red pepper. The sausage contains salt so taste it a bit – if too salty add a splash of boiling water.

Once the pepper is slightly softened and the sausage is crispy at the edges, scoop everything out onto a serving dish.

Chinese chives, tomatoes and pork loin - Jiucai fanqie chaorou (韭菜番茄炒肉)
Heat the pan again – a little cooler this time – and add a tablespoon of oil. Once the oil is hot, add the thumb of chopped ginger and stir. The ginger shouldn't brown, only soften a bit to release the flavor.

Next add the chopped pork and fry to seal the meat, again avoid browning. It should sizzle noisily, but turn down the heat if it starts to char.

After two minutes add the chopped tomatoes and a few pinches of salt. Start out by under-seasoning the dish because the saltiness will intensify as the liquid evaporates.

Once the tomato juice has reduced into a velvety sauce, add the finely chopped garlic and the chives. Taste for salt. Cook for a few more minutes until the chives are softened before transferring everything to a serving plate.

Put a little over a liter of filtered water in a kettle and boil – later this will be used to cook the soup. 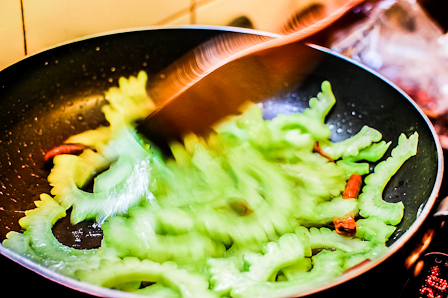 Spicy bitter melon - Ganjiao kugua (干椒苦瓜)
Heat the pan again and add a tablespoon of oil. Add the dried red chillies and fry until they show the first signs of browning, but make sure not to burn them. Quickly add the sliced bitter melon and salt lightly. Stir regularly and cook until slightly softened. 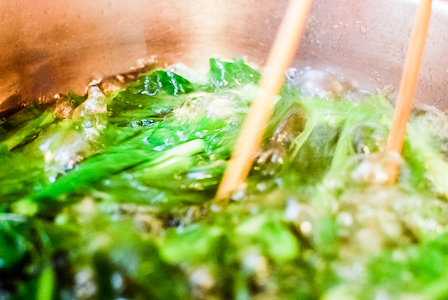 Chicory soup - Kucai tang (苦菜汤)
Rinse out the pan with a slug of hot water from the kettle, then put the rest of the water in the pan and turn the heat up high.

When the water is boiling rip the chicory greens into chunks and add them to the pan, pressing the leaves down into the water. Salt lightly, remembering that the seasoning will intensify as the water boils down. Cook for a few minutes until the chicory stalks split when pinched.

Just before serving use the flat of a heavy knife to smash the remaining thumb of ginger and add it to the pan.

Serve with rice and enjoy!

I think I've seen them on here in years past, but I'd love recipes for Grandmothers Potatoes and those lovely Er Kuai (spicy or sweet) breakfasts that we could only get in Kunming.

Here is the link to that recipe: gokunming.com/[...]

Fantastic, we just love (and miss) Yunnan food so much.
There are 2 sweet foods I' like the recipe for, though I may stand corrected if they are not local food:
1 Chinese Pizza - or so its called, kind of a sweet sticky rice, pressed into a pie pan about a cm thick. Some red looking stuff through it, maybe just food colouring.
2 A type of sweet bean paste pie, rice pastry top and bottom, thin layer of bean paste in the middle.

Also,anyone know how to make the stinky preserved tofu, a bit like Vegemite, only a patriot would eat the stuff...used as a condiment.

Hear you EjPeter. I miss the Er Kuai a lot. Seems like the only place to get them in Yunnan is Kunming, which is really sad. It's by far my favourite Chinese breakfast snack.

I'd like to have the recipes for:
Hong shao meat
jue cai (I think it's Dai food - maybe fern?)