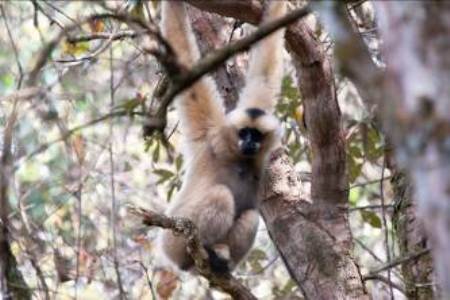 A female western black-crested gibbon in the wild

In 2008 the Yunnan white-handed gibbon was declared extinct. This month the Yunnan government announced new measures to prevent another member of the gibbon family from suffering the same fate.

On March 5, Yunnan forestry officials instituted a plan to protect the western black-crested gibbon (西黑冠长臂猿) and its habitat within the province. The plan is the first species-specific conservation project in Yunnan.

Around 90 percent of the world's 1,300 western black-crested gibbons live in Yunnan. Isolated populations also live in northern Vietnam and Laos.

Western black-crested gibbons live at elevations above 2,000 meters and once inhabited much of Yunnan. Today their populations are mostly limited to areas in the southwest of the province.

The animals grow to around a half-meter in height and weigh seven to 10 kilograms. Females have golden fur and a black crest on their heads, males are all black. 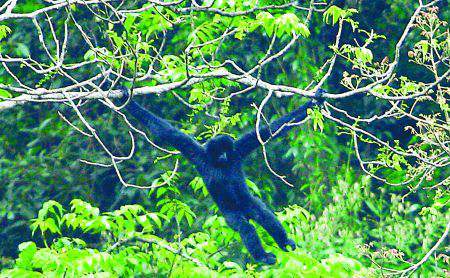 The main threats to gibbon survival are hunting, agricultural encroachment and misguided forestry practices. The planned conservation efforts will include assessing gibbon populations and designing methods to protect their dwindling numbers.

Western black-crested gibbons are designated as "critically endangered" by the International Union for Conservation of Nature. This designation indicates that a species has lost or is expected to lose 80 percent of its overall population within three generations.

Gibbon Conservation Alliance, a non-governmental organization focused on protecting the planet's remaining gibbon populations, conducted a field survey of gibbon populations in Yunnan in 2009. A report of the study's findings said that no live gibbons had been heard or sighted since the 1970s in Yunnan east of Honghe, also known in the West as the Red River.

seems to be a plan to make a plan, rather than a plan