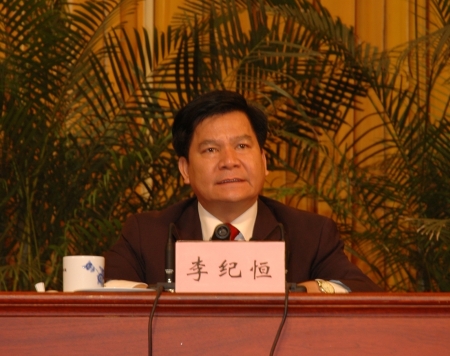 Last weekend Li Jiheng (李纪恒) was chosen by the Yunnan People's Congress to serve as governor of Yunnan. Li's selection concludes more than a year of changes in the top spots of the Yunnan and Kunming governments.

Li has served in the Yunnan government since 2006. On top of his position as governor, he is also concurrently a deputy party secretary for the province. Prior to coming to Yunnan, Li worked in the government of his native Guangxi Zhuang Autonomous Region for more than 20 years.

Li may be best known for his high-profile arrival by helicopter in Menglian County in 2008 during violent clashes between rubber farmers and local police. He was a provincial deputy party secretary at the time.

Since then, Li hasn't grabbed many headlines. When he does speak with media, increased trade with Yunnan's Southeast Asian neighbors and an emphasis on sustainable development tend to be themes upon which he focuses.

Kunming has also seen some leadership changes in the past year. Many observers were surprised last December when my-way-or-the-highway party secretary Qiu He was shifted to his current position as one of Yunnan's deputy party secretaries, with some saying that what was technically a promotion was a de facto demotion.

Qiu was replaced by Chuxiong native and relative unknown Zhang Tianxin (张田欣), whose agenda so far has focused primarily on dealing with Kunming's worsening drought.

Kunming's mayor is the only one of the top four provincial and municipal offices in which there was continuity. Mayor Zhang Zulin (张祖林) was appointed to a second term in January 2011.

The leadership changes in Yunnan and elsewhere in China come in the runup to the 18th Congress of the Communist Party of China this autumn in Beijing. At the congress President Hu Jintao and Premier Wen Jiabao are expected to hand the reins of the world's most populous country to current Vice President Xi Jinping and Vice Premier Li Keqiang.