Recent transport agreements signed by China and Vietnam highlight the growing importance of the Yunnan-Vietnam trade relationship. The agreements were signed during a visit by Yunnan Governor Qin Guangrong to Hanoi for the Vietnam Expo 2007.

The transportation ministries of Yunnan and Vietnam's Lao Cai province signed an agreement earlier this month which will expedite border-crossing procedures for vehicles carrying cargo or passengers between the neighboring provinces.

The agreement will benefit trucking firms, which will no longer be required to unload their cargo at the border for transport via other trucks. Tourist and passenger services between Yunnan and Lao Cai will also be expedited, giving travelers from Yunnan easier access to destinations including Lao Cai City, Sa Pa and Van Ban.

China's Ministry of Communications and Vietnam's Ministry of Transport also signed a memorandum of understanding (MOU) earlier in the month paving the way for China to help its neighbor to the south build four expressways that will further integrate the two countries' road networks. 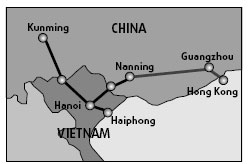 In the MOU, China pledged technological support including feasibility studies and road design on a Hanoi Airport expressway as well as the Hanoi-Lang Son, Hanoi-Haiphong and Hanoi-Lao Cai expressways.

According to Chinese government statistics, Vietnam overtook Myanmar as Yunnan's largest Southeast Asian trading partner in January of this year.

The Hanoi-Haiphong and Hanoi-Lao Cai expressways are of particular significance to Kunming as they will provide a road link via the Chinese border city of Hekou to the port of Haiphong - the closest port to Kunming. A 400-kilometer expressway connecting Kunming with Hekou is scheduled for completion this year.

The Hanoi-Lang Son expressway will connect the Vietnamese city with an expressway into Nanning, capital of Guangxi Zhuang Autonomous Region, via the Chinese border city of Youyiguan. Goods traveling into Guangxi will be able to continue on to major cities in and around Guangdong province including Guangzhou, Shenzhen and Hong Kong. No timetable for completion of the roads has been given.

Can someone please give an update on any news or progress on the Kunming-Hanoi railway reconstruction. The last official news on the web seems to date from late 2004, over 3 years ago! Is it underway or completely stalled? I notice they are building a 400km freeway which is probably taking all Yunnan's infrastructure budget!