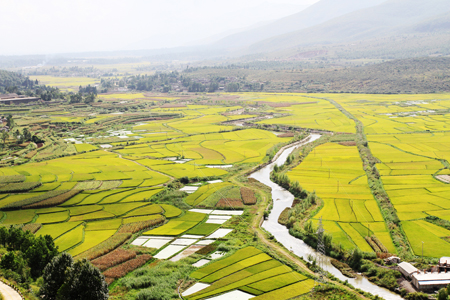 Editor's Note: GoKunming readers Don Hayes and Barney Chambers recently cycled from Dali Old Town to Shuhe and have shared the following report to show how to cycle from one of Yunnan's most popular old towns to another:

After reading the article Cycling from Kunming to Dali Old Town we took advantage of the National Day holiday to follow the route ourselves. We found the description very helpful, easy to follow and accurate down to the kilometer. It was a very enjoyable ride and I would recommend it to anybody, but after four long days of riding some pretty rough roads in bad weather we were ready for a rest day and our bikes needed a bit of attention.

With our bikes and our legs feeling better for the day off, we headed off towards Shuhe, in Lijiang.

Day 1: Dali Old Town (大理古城) to Songgui (松桂) – 93.4km
There are two roads out of Dali Old Town, the old S221 by the lake and a newer G214 highway further uphill towards the mountains. We chose the G214 highway and, aside from a small section of roadwork early on that had us take a detour through the Three Pagodas car park, it was good riding. Fast and smooth with only light traffic. 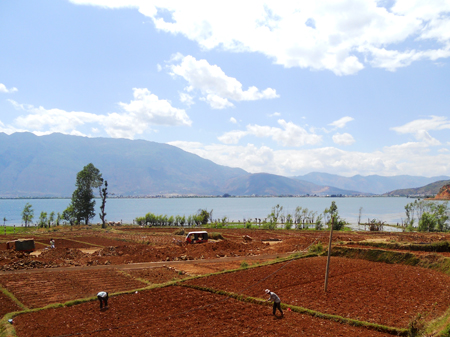 With around 28km on the clock, opposite the Butterfly Spring, we took a right turn to bring us down to the older S221 road (大丽公路/221省道) that runs along the lake. Although narrower and with more buses, trucks and tractors to deal with, we found it to be a nice fast road too.

The town of Jiangwei (江尾) is at the 33km mark. You need to stick on the main road (S221) as it veers left here otherwise you will end up heading back down the other side of the lake towards Xiaguan (下关, Dali new town). Basically keep an eye out for the signs and follow the traffic along the larger road.

After Jiangwei the road remains good. Traffic is the only real annoyance. The small rolling hills aren't enough to slow you down until around 9km out when the rolling hills become a gentle slope which soon gets steeper. This is the beginning of a roughly 18km hill. It's not hugely steep the whole way but there are enough sharp steep corners to slow your momentum. There are plenty of impressive views along the way but there is no other way to put it - this is a long hill.

Disappointingly there is no sharp peak and corresponding descent. Rather it gently flattens out and becomes a series of mild ups and downs. Nothing too demanding, it is in fact a very nice road to ride.

At the top of the hill, at around 65km on the clock, we stopped for lunch at a bus/truck stop. This was the first shop we had seen since beginning the climb. A large bowl of fried rice and some overpriced fruit were to provide fuel for the rest of the day. 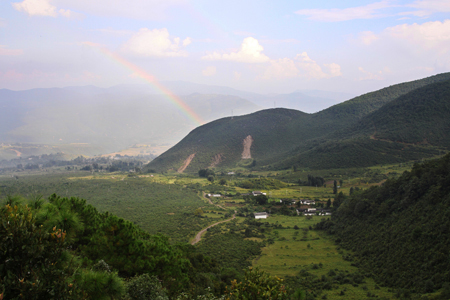 The road remains the same for most of the rest of day one - good surface with plenty of gentle ups and downs and beautiful views down into the valley below. The traffic was a little heavy at times and the buses in particular leave little room for bikes. It should have come as no surprise then that we were to arrive at the scene of an accident just minutes after it had happened. Thankfully nobody was killed on this occasion but the destroyed vehicles were a reminder that we would be wise to slow down and stay vigilant.

The downs slowly become longer than the ups and at around the 86 or 87km mark the road begins to descend properly. It eventually becomes a very satisfying zip down on a good surface into Songgui. Luckily we found a hotel just as a storm arrived. 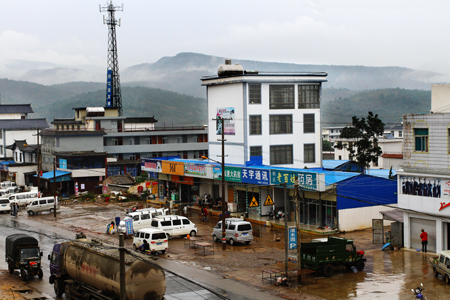 Day 2: Songgui to Shuhe (束河) – 74km
We woke to some heavy showers, cold and grey skies but it eventually cleared into a very nice day for riding. Songgui is a small town and there is no question of which road to take. The road that leads into town also takes you directly out. The pleasant countryside with nothing strenuous and makes for an agreeable way to start the day. 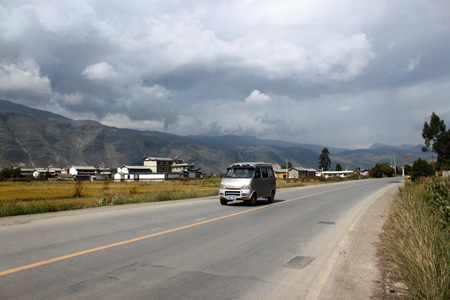 After 11km on the clock the road begins to climb. This is by no means a killer hill, more of a steady grind. It regularly eases off but it has its steep moments and it is roughly 5km of incline before it flattens out. What it eventually lets out into is the unexpectedly flat run into Heqing (鹤庆). This is a very nice road for riding. Fast and flat with only the odd tractor or overloaded farm truck to slow you down.

With 28km down for the day we had lunch in Heqing. It's a pretty sizable place and finding something to eat is no problem. This is lucky since after leaving here there is no obvious place for food until Lijiang.

Once again the road that brings you in to town is the road that takes you out. It just runs straight through the centre of town. On the other side of Heqing it veers to the right towards some unpleasantly steep looking mountains but eventually turns again to follow along at the base. 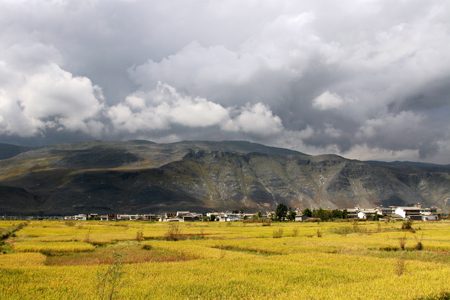 At around 15km out from Heqing you pass the Lijiang airport. It seems they are building a new highway between Lijiang and the airport and this means riding on a few kilometers of unfinished road. Before too long we were back on the sealed surface.

Along the base of the mountains after the airport the road is not as flat as it was on the valley floor. It is still relatively good but there are some short sharp rises from time to time. It eventually grows into something more significant but again not extreme. 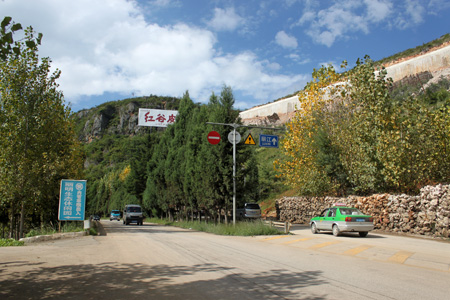 Part way up this final hill the road splits into two so that the oncoming traffic is separated onto a different level. There is also a third road that leads down to the left here – keep right. This strange arrangement is because the road here has been cut into the side of a sheer cliff. We hesitated before riding this as it looked a little dangerous but in fact there was more than enough room for traffic to pass. The views of the valley in this short section of road are spectacular.

Once you crest this hill and cruise down the other side it is another 15km or so of wide good quality highway to Lijiang. It is a flat and fast approach and you can see Jade Dragon Snow Mountain off to the right and more importantly Lijiang Old Town on a small hill in front of you as you ride.

Lijiang is not a huge place but it would be handy to plan your route beforehand. We weren't so prepared and ended up having to follow some buses which we guessed were heading towards the famous water wheel in Lijiang Old Town, which is technically known as Dayan (大研).

Once in Dayan we met up with a local friend and after a coffee at Prague Café she kindly guided us to Shuhe, our ultimate destination.

It is worth mentioning here that there are two roads into Shuhe, the shorter and more direct route along Shuhe Lu (束河路) passes a small hut near the entrance of Old Town where visitors are often charged a rather steep admission fee while the slightly longer back road that passes through Songyun (松云) will allow you to enter for free.

GoKunming thanks Don and Barney for their contribution. If you have a story you would like to contribute to GoKunming, feel free to get in touch via our contact form.