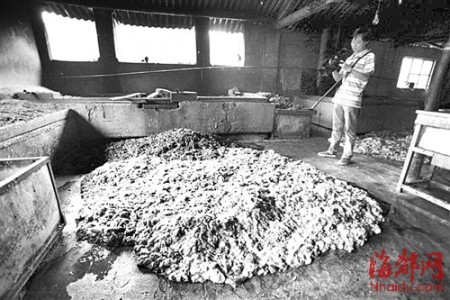 One facility has been shut down, but there are almost certainly more

The recent bust of an illegal cooking oil production facility in nearby Anning illustrates how even the oil in which food is cooked can be more dangerous to diners than the food itself.

Police officials in Anning, 30 kilometers west of Kunming, are reporting that the illegal workshop was producing digouyou (地沟油, 'gutter oil') by processing "rotten animal entrails and low-quality meat" into an oily product that after bleaching and deodorization was used to prepare dishes in Kunming restaurants.

In only two months, the facility produced nearly 50 tons of the oil for the Kunming market.

According to Chen Weiyu (陈韦宇), chief of the Langjiazhuang police station in Anning, police were tipped off regarding the existence of a suspected illegal "gutter oil" operation in a nearby mountain pass on September 16. At 8pm that night, police raided the facility, arresting several workers, Chen said.

Chen added that although the workshop's employees initially insisted that the oil they produced was to be used in animal feed, the boss of the operation, surnamed Cheng, told police that the oil was transported to illegal "refining" facilities in Kunming where bleaching and deodorization work was done before the oil was resold to local restaurants.

Five people have been arrested in Anning in connection to the case. It is not yet clear if the investigation has been extended into the Kunming-based refining facilities.

How big a problem is so-called gutter oil? A recent Xinhua article entitled "Our kitchens must be freed from gutter oil" puts it rather bluntly:

"This gutter oil, made from restaurant leftovers and collected from sewers, is widely present across the market. Some estimates put the annual figure of such oil at 2.25 mln tons. To put it another way, there is a chance you will eat gutter oil once in every 10 times you eat out in China. Among the food safety scandals plaguing China, illegal cooking oil probably affects the largest number of consumers."

Time to start cooking at home

Libertarian Paradise, till the cops got involved!

For many years now "Enjoy the food, don't look at the kitchen" has been my favourite saying regarding Chinese food. How about the government tackling the rising unemployment rate by training 20.000 health inspectors and giving them some rules and regulations to enforce?

My favourite saying is 'Sit back and enjoy the mess'.

What I want to know is, how many restaurants are complicit in using this stuff, and how many just buy the wrong oil cause they are trying to cut cost. If individual restaurants were regularly being outed for using that shit, it might drastically cut down on its use.

What doesn't kill you, only makes you stronger! This is only the tip of the iceberg.

If the newspapers would only adopt a "shame" page to publish businesses and people that do these activities, much of this would end quickly. Face is everything in China.

I would like to see how this operates from a business point of view. You know like, how can they run this with profit, how low can the cost of chemicals be to bleach (what the F are they using to do that anyway) and perfumize actually be?

It's the same with fake eggs"? How can the production cost of a fake egg be possibly lower than that of a real egg?

Can someone shed some light on this?

Sewer oil? What does that even mean? How can you collect the oil from sewers, who would even do that. But my question is if the oil is beinig bleach and deoderized what chemicals are being ingested when I eat it? Im not a health nut, I smoke cigarrettes, but what OTHER carcinogens entering my system could be harmful?

Sewer Oil stands as a term and it's so disgusting that I am not sure whether I should believe it's existence or not, though I have seen stories written about it and I have seen people doing it (maybe it's the usual denial reaction), the story goes like this.

Back in the days, restaurants would discard used cooking oil into the cities sewer system where it would collect on certain points (either floating on top or building up large chunks on the side walls). People would then go down into the sewers and skim off/collect this oil, filter, maybe refine, but in the end sell it again.
I read stories about restaurants getting aware of those collection points on (or close by) their property and selling "licences" to people to, officially, clean the gutters.

The only "upside"I see is that, after cooking with this oil there shouldn't be any traces of viruses or bacteria left, as the oil is probably heated up to over 180 degrees Celsius, which, even on a short time exposure, make sure that everything still living in it should be dead.

Nowadays, every restaurant is supposed (by law) to have an oil filter system (basically a large metal box with different chambers to slow down water flow, so that the oil can be skimmed off) in the kitchen, I guess this makes the operation more economical and cleaner (hate to say this).

But like I said, it's so hard to believe that it might be an urban myth and I am not sure. If you want to see for yourself, google is your friend and will help you, if you ask it about sewer oil nicely.

@pierre - I've seen these guys ladling out oil from the sewer adjacent to the restaurant near my home. It's truly disgusting looking stuff when they bring it up to the surface. At first I thought they were trying to clear a blocked sewer, then realized they were skimming the oil (and god knows what that chunky lump crap was)...crude metal buckets on long poles.

Any chance this stuff is ending up in the bottles of cooking oil sold at supermarkets for home use?

watch your back chris.

Yeah, when posting please always think 'can this cause instability and upset the harmony of society'. My local friends taught me that. This might well do that, another food scandle ;)

They found him dead in Luoyang, Hennan province.
Hennan the heart of coruption.

The food inspection agency said they havent found any illegal oil...read between the lines..

People in all countries receive the personal loans from different banks, just because that is comfortable.

Therefore, next time that you visit a restaurant on Wenlin Jie (and elsewhere) and go to the WC, you'll see a sign that says, "Please, only use for #1, not #2."

And who actually reads it?!