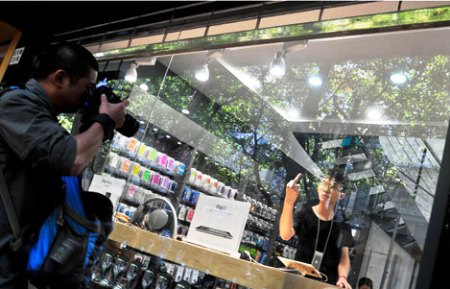 "I've got your IPR right here"

Yunnan Net is reporting that on July 25 the Kunming Municipal Industry and Commerce Bureau launched an emergency investigation into the fake Apple stores that have been a hot topic around the world and China since blogger Birdabroad noted their existence on her blog last week.

The bureau has reportedly also notified the headquarters of Apple's China company of the initial findings of its investigation and has told Kunming media that it hopes to work with Apple on handling the problem.

Investigators now say there are five fake Apple stores in Kunming, two of which – one on Baiyun Lu and one on Dongfeng Dong Lu – had not applied for business licenses.

This would seem to suggest that the three fake Apple stores with business licenses – one on Wucheng Lu, one on Zhengyi Lu and the other in Jinmabiji Fang – had obtained licenses through bureau staff who were either oblivious to the intellectual property violations being committed in the stores or simply didn't care.

Since the focus of unwanted global attention on Kunming's apparent lack of IPR enforcement on July 20, Kunming officials have investigated more than 300 computer shops throughout the city's four main urban districts, confirming that the three shops mentioned on Birdabroad's blog were fake and discovering two more fake Apple stores.

The three fake Apple stores that had acquired business licenses have been found to be selling genuine Apple products.

In theory, China's accession to the World Trade Organization in 2001 was supposed to lead to an eventual elimination of out-in-the-open IPR violations such as these fake Apple stores. But perhaps even more significant than the lengths to which these stores have gone to appear real is how surprised the rest of the world is that this would happen.

Since WTO accession, Kunming has continued to be awash with fake goods, from the counterfeit DVDs that can be purchased at small shops throughout the city to the fake dairy products that gave infants kidney stones in 2008, to the fake beer operations broken up that same year, to the discovery of a massive fake liquor scandal last year. Earlier this year, investigators even discovered a small workshop producing fake cakes.

Will the fallout from the fake Apple store scandal improve the IPR/counterfeit situation in Kunming? It would be nice to think so, but considering that when a local man builds a fake Lamborghini he is praised by netizens, we're not going to hold our breath.

There was nothing fake about the way most of the staff in these places worked.

Unlike many stores (Wal-Mart, Metro, Carrefour etc) were the staff hang around in droves glued to their cell-phones, chatting, fooling around and generally getting in the way, the staff in the Apple stores (fake or otherwise) stand back and let you browse. When you do need them they listen, very unlike some of the air-heads elsewhere who are programmed to sell the junk of the day whether you like it or not.

Shops mentioned above should be snapping any Apple store staff made redundant and hiring them at a premium to do some serious staff training.

Maybe Apple Corp. should open some real Apple stores in China? Sell their goodies at a reasonable price?

Several months ago I moved from Kunming to Xiamen. One of the things I miss most about KM are the video stores. There are none in Xiamen.

Unfortunately the local authorities here seem to have bought into the 'intellectual property rights' scam. In KM there must be thousands of stores where you can buy 'value added' DVD's. By value added I mean that the foreign movies almost always have Chinese subtitles and the Chinese movies have English subtitles. The quality is usually excellent and often have copy protection and obnoxious FBI 'warnings'.

Since there are no alternatives as the 'genuine' DVD would cost a prohibitive 100 RMB or more, this business just ceases to exist, putting perhaps thousands of small businesses and people out of work.

And so why is this? To obey the diktats of the big American entertainment monopolies like the MPAA & RIAA. So how does anyone benefit from this? The answer is no one benefits! I hope Kunming keeps their DVD shops open.

Re the Apple stores. We have them here too. So the same question could be asked. If the products they are selling are genuine and they can get warranty service, what's the problem? Doesn't Steve Jobs have enough money? Maybe Birdabroad should mind her own business. That's what most Chinese people do!

As to the fake products mentioned in the article which may pose health hazards, they are not covered by the IPR rules and should be stopped.

Leaving aside the alleged fake Apple stores, the concept of 'minding your own business', turning a blind eye to irregularities, and complete disregard for law and order is indeed what many people in the south of China do. I recognise this and accept this as the culture. But while maintaining a stance of non-interference, I don't accept it is neccessarily good for society - any society.

I've seen local people walk past a lost and crying child. They were minding their own business and with complete disregard for one of the most vulnerable members of their own society. I've seen someone knocked off of a motorbike and as he lay, clearly hurt in the middle of the road, local people sat in the chairs and made no attempt to go to the aid of motorcyclist. They were minding their own business.

Minding your own business is a state of mind which is either on or off and I don't believe you can be selective. Birdabroad was not minding her own business, he or she was being curious, making observations and speaking of what she observed. It's what people in civil society tend to do. I dare say Birdabroad would not pass by a clearly distressed child in the street. There is such a thing as a 'duty of care' both morally and legally in many countries. Minding your own business is a luxury civil society can't always afford, but as you rightly say, that's what most Chinese people do.

They've been open for years and nobody gave a

Here is another post on the fake apple stores in Chengdu, but they are around all over China & rest of the world. Seeing that news blown up so big is ridiculous
www.gochengdoo.com/[...]

Also, the growth of "fake" TOMS shoes is on the rise in Kunming. They are being sold under the name "J&M" and about half the price of the original TOMS. Right before I left town, I started to see the actual TOMS label in the same stores but the back heel label was a little crooked and a little smaller than the original. However, I have to say that the construction and quality seemed pretty similar. Not sure intellectual property rights actually exist in China.

You might want to add Toni & Guy to this list as well. There is some crappy place decked out in all their logos and product, and there is no way and hell thats rea.l

I had experiece buy Iphone in Kunming.. The seller warned me not to go others country or USA.. I asked why? The seller told me I can be cought or fine by the local reinforcement because using the fake sofeware or application in the Iphone...

I did see a report that although the Apple Stores were fake, the products were not.
If true this is more an argument for Apple to license more resellers.

The profit margins on Apple products isn't all that great - the dealers are incentivized by hitting quotas. Although Yunnan is still one of the poorest provinces by per capita, everyone can afford to own and operate a car - which implies Apple's premium brand is probably actually affordable - the iphones are definitely the rage.

The advantage of the fake stores is out of warranty or warranty voiding services, such as replacing the asthmatic hard drive in your laptop with a 1tb-ish sized thing (do they have 1tb laptop drives yet?) or increasing the RAM beyond apple's limitations (at the cost of battery power and occasionally reliability).

As for apple stores - you can buy direct from the apple store online in china. The store used to suck big time - but has been revamped...if you can skip the impulse buy - it works just fine for most apple products and accessories.

There used to be a lot of pirated Penguin books and Oxford U. Press books in Chinese universities, used to teach literature. Then Penguin and OUP wised up, started producing their books in China, adding some notes in Chinese, selling them at a price reasonable for Chinese students. No one uses the pirated copies any more. Most foreign publishers, etc., have not wised up yet.