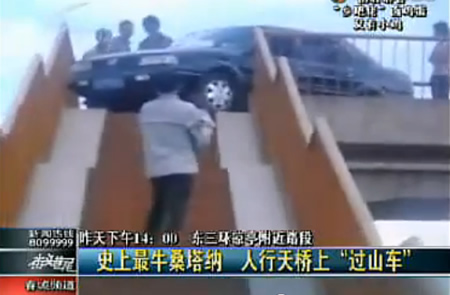 Considering that Kunming is adding 1,000 cars to its already-congested streets each day, it is not surprising that one has to dodge cars in bicycle lanes or on sidewalks. Perhaps then, it shouldn't be shocking that one Kunming driver recently drove their Volkswagen Santana up and over a pedestrian bridge.

The video below is of a Kunming news report about "the most hardcore Santana in history" (史上最牛桑塔纳), in which an eyewitness describes an impatient driver who decides to avoid traffic on Sanhuan Dong Lu.

The driver reportedly pulled out of traffic on the third ring road, driving the wrong way for a short distance, before pulling up onto a pedestrian bridge and driving to the other side of the road.

The driver then proceeded to not allow a man carrying a baby up the stairs to pass. After a short staredown, the man with the infant retreated down the stairs, obviously annoyed. Shortly afterward, a young woman barely made it by the car, after which the car drove down the pedestrian bridge.

The car, whose license plate is 云A995L6, may be the first to cross a foot bridge in Kunming, but given the dismal state of traffic in the city, which has been nicknamed "Traffic jam City" (堵城) by its residents, it is quite possibly not the last.

WOW!!! Where to start?
1. What was he thinking????
2. Why didn't people stop him?
3. How was he not dragged out and beaten?
4. Even on a pedestrian bridge he was an ***h*** driver
(not allow a man carrying a baby up the stairs to pass)
5. Was he given a hefty fine, had his license withdrawn, or even questioned by the police?
6. German technology! Yes we can!!!!
(doubt a QQ could have done it)
Maybe time to leave Kunming - it's regressing to jungle law

Classical of the emerging new culture in China - selfish, irresponsible.

Great ad for VW though - who would have known that a Santana could emulate an SUV?

Use of asterisks (***) often do little for clarity. For example, should someone wish to describe such a driver as an 'arsehole' they might use A***hole. However this may lead to confusion. Thus, if anyone should want to describe a driver in this way then 'arsehole' spelt out and without asterisks would be much clearer to the reader. The more vulgar sounding 'asshole' might be avoided in case it should cause offence and result in the post being deleted.

It's wrong to condemn this driver in a trial by media. There could well have been mitigating circumstances. For example, the driver could have been drunk, a busy person or VIP on the way to lunch. There may have been other understandable reasons for a driver to act in such a way. Possibly they just took a wrong turning whilst answering a 'phone call or watching an exciting scene on a dashboard mounted video console. Such pressures on Kunming drivers these days that one should not be to hasty to judge.

I like the first tag "disregard for human life"... says all. I'm wondering what's still to come that will make use of this.

This must have been one of those pedestrian bridges where you also have a ramp for disabled people (no, from now on I will call it a car ramp; sounds much more developed) that has a lower angle. Even with the Santana's super powers, running gazillions of kilometers without a single service for example, I do not think it's possible to go up the steep side he/she just went down.

GoKunming, please keep us posted on what happened with the driver afterwards

I'm mostly amazed he didn't have an Army. Police or VIP licence plate - those drivers simply don't give a damn.

I'm surprised his car was still driveable and didn't end up with a zillion dents (or maybe it did). I wouldn't dare drive like that knowing that damaging my car is almost certain if I were to attempt that and secondly I have more regard for the safety of pedestrians than this bozo did.

Still, this was an entertaining piece of news.

Could it be a publicity stunt ??
VW is losing market share....

Any updates on this story?

I'm still impressed his car made it up and down the bridge without 4WD. Amazing!

Dang! And I thought us drivers in the US were crazy! I was scared driving around in Kunming and even more scared walking around! lol

Yes, why was he not given a token ticket by the cops. Are traffic laws in China really so valueless?

I was looking for this article a few weeks ago.