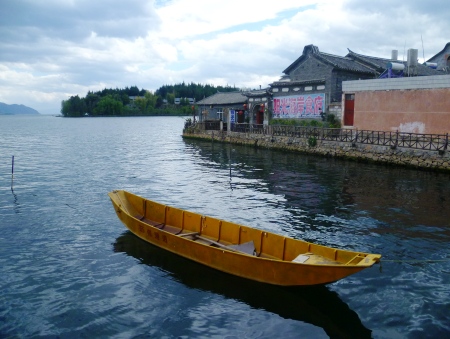 A view from Yujidao

Editor's note: Kunming resident Heinz Willems recently visited Shuanglang, across Erhai Lake from Dali, to see what the increasingly popular alternative to Dali's old town had to offer. He provided GoKunming with his account. If you would like to contribute articles, photos or video to GoKunming, please get in touch via our contact form.

Three weeks ago when I first heard about the fishing village of Shuanglang (双廊) on Erhai Lake's northeast edge, I was frustrated that it had slipped under my radar for so long but resolved to make the trip and see it for myself. A few days later we were driving along the lesser-known east side of Erhai.

Parts of the road are still under construction but for the most part it's a smooth drive right by the water, passing the odd temple, solitary house or village. The weather was cloudy – the outline of the Cangshan Mountains on the other side was barely visible.

We arrived at the southern side of Shuanglang and wandered the labyrinthine alleys of the village in search of the lake's edge and a room for the weekend. We eventually found the Sky and Sea Lodge and Bandao 63 next door.

Both have lovely and quiet lakeside environments, but they are in the middle of a purely residential area with not much to see or do and hence also offer full board to their guests. In any case, the best lakeview rooms (a bit overpriced at 450 yuan a night, probably due to the upcoming Dragon Boat Festival) were all gone and only simple 80 yuan rooms with no bathrooms were available.

We managed to find the way back to the car and drove on to Yujidao (玉几岛), which is the more tourism-oriented area of Shuanglang. Yujidao is a small peninsula crammed with old houses, temples and more than ten guesthouses, with several more under construction. Most are right on the water - given that Erhai's water quality has improved in recent years, this is a big plus. 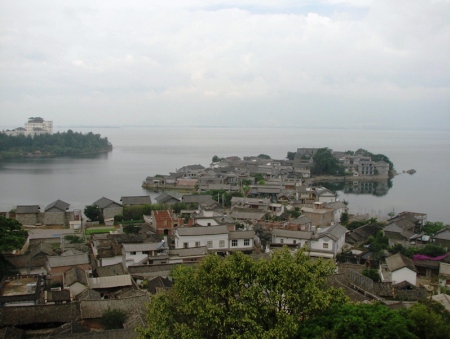 We wandered around, looking at most of the guesthouses, but again the best rooms were all taken. Finally we found a new guesthouse, the Houniao [which officially goes by the unfortunate English name Seaview Inn Migratory Birds], at the end of a side alley. It had only been open a month or so and was as yet undiscovered and hence completely empty. The rooms are beautifully decorated in differing styles (Chinese, Japanese, Thai) and all have small balconies facing the water. At 330 yuan, this felt like a good deal. 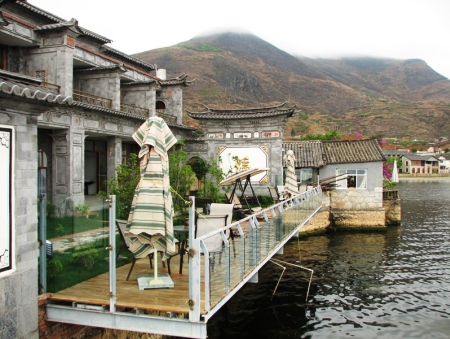 Later, on the recommendation of the friendly manager, we went over to the Wenhua Dayuan restaurant to try some local dishes. The chef was clearly used to having foreign visitors and advised us on what to try. After a great meal by the water, we set out to discover if there was much nightlife in Shuanglang.

There wasn't. But that was fine. After all, we had wanted to find a quiet alternative to the bustle of Dali.

We had a drink in Qingchen, an interesting glass-and-steel construction and about the only place to have something other than beer or wine – the bar is quite well stocked with something for everyone and their homemade Greek yoghurt with a drizzle of honey was a delicious surprise. 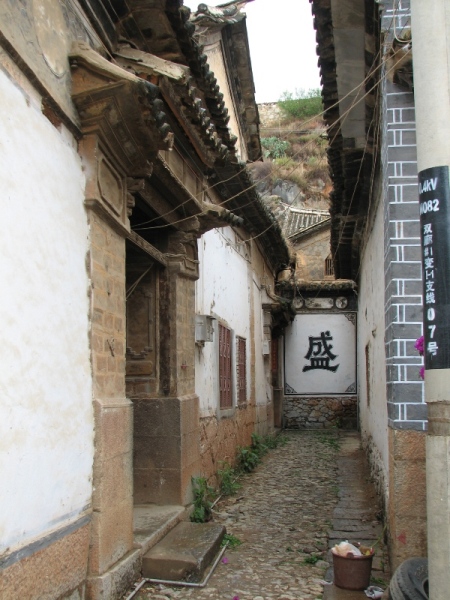 The next day the weather was still grey and rainy. We wandered around the village during the short periods when the rain stopped, admiring the old houses built in the traditional Bai style.

We had lunch at Flying Turtle Coffee, which serves up good coffee and pizza.

Later we wandered around some more and reached the end of the peninsula where we found a very modern and striking building on the edge of the cliff with a stunning view across the lake, which we believed to be a private house.

Walking around, we found the entrance and discovered that it too was a guesthouse – a very upmarket one charging over 1,000 yuan per night – called Qinglu Villa. We sat down at Qinglu's café and had a chat with the local wife of the eponymous owner, a successful artist from Chongqing.

The two built their dream house in Shuanglang some ten years ago, but when tourists continuously knocked on their door wanting to see the house, they decided to convert it to an exclusive guesthouse and move to a newly constructed residence next door. She didn't say whether people disturb them at their new house as well. 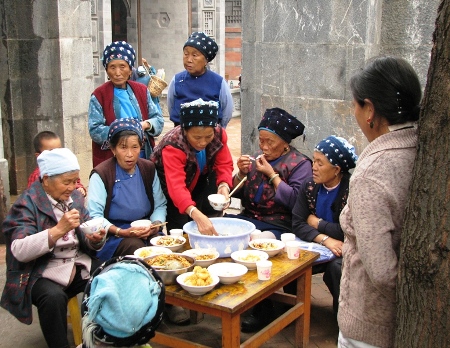 The waterfront between Yujidao and the small area opposite that serves as the village's dock has recently been developed, there are several new buildings still waiting to be turned into bars and restaurants. 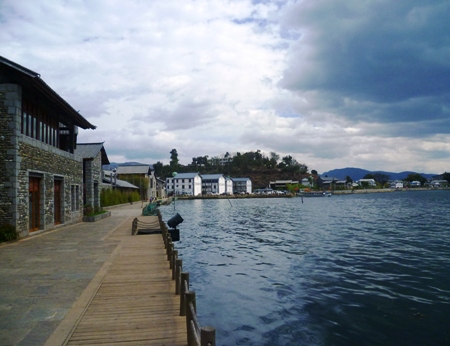 The promenade south of Yujidao

Further on, there is a new waterfront promenade which faces the tiny Nanzhao Folk Island (南诏风情岛), a stone's throw from Yujidao. In 1999 the island was converted into a Nanzhao Kingdom theme park.

Although tiny, the island has a massive hotel sitting on the crest of the hill, a large Guanyin statue, a dock for big tourist boats, some villas and lots of trees. Given the weather and previous experience of theme parks in China, we skipped the chance to visit the island and looked for dinner. 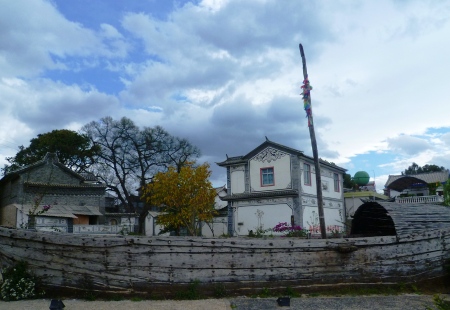 The center of town at dusk

Just past "fishing boat plaza" there are a number of small restaurants. We picked one with tables outside on a wooden deck and enjoyed a dinner of local speciality spicy and sour fish stew while taking in the visual interplay of the setting sun, clouds, mountains and water. 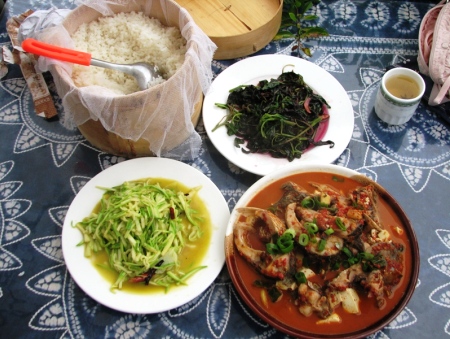 Shuanglang is a good place to relax and enjoy a slower tempo if you don't feel like partying or shopping in Dali's old town. Old alleys and traditional architecture make wandering pleasant and it's easy to take a boat out on the lake or just kick back and do very little.

Aside from local festivals, one of the most important days in Shuanglang is the start of fishing season on August 1, when locals race in small boats with white sails to get the first catch of the year. 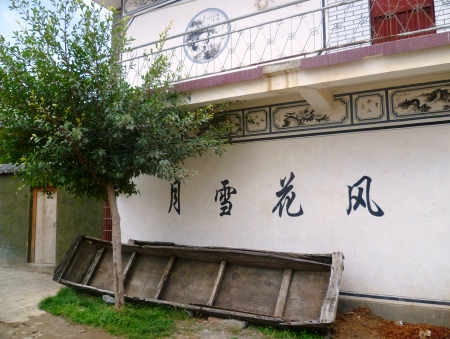 As with everywhere in China, change is coming to Shuanglang. It was hard not to notice that there were several new guesthouses being built in anticipation of future visitors. The new bar/restaurant area will certainly change the mood of the village, but hopefully it will be a few years before it becomes a mini-Lijiang.

The completion of the upcoming new road around Erhai plus the recent arrival of rail access – Shuanglang has a station on the line to Lijiang – are making it easier for large tour groups to access this quiet lakeside village. All the more reason to go there sooner rather than later. 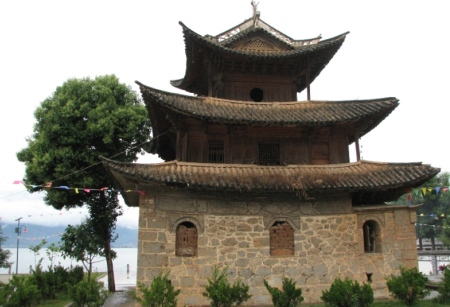 Getting There
From Xiaguan (new Dali), take the blue 8 bus (1.5 yuan) toward Dali old town. Ask to get off at the North Bus Terminal (Beizhan). Buy a ticket to Shuanglang Xiang (15 yuan). It takes about 1.5 hours to arrive, driving up the faster road on the west side of Erhai and around the northern tip. Private drivers can also be hired at the intersection of Bo'ai Lu and Renmin Lu in Dali old town.

To drive up the east side of Erhai by car, turn off before Xiaguan towards Fengyi and Dali airport and then just follow alongside the lake when you reach it. There are some unmarked turns before one can see the lake, but generally it's easy to figure out which way to go or in the worst case there's always someone around to ask.

This is an interesting look at the recent changes in Shuanglang:

Does anyone have contact details for accommodation Seaview Inn Migratory Birds - the Houniao mentioned in this article. Will be visiting Yunnan in April 2014.

A toll gate is still under construction that is just 100 meters from the main road into town. I took a picture of the last house standing in the path of the toll road and the owners are still hanging on although half their home has already been demolished. There are new hotels everywhere so there is no need to make reservations. Prices vary from 100 Yuan to as crazy as 780 per night on the shore near the port to Nan Zhao Island. Shuang Lang is already NOT what it used to be and the people are changing quickly. I saw at least 10 bike and scooter rental shops along the 3 km main road.