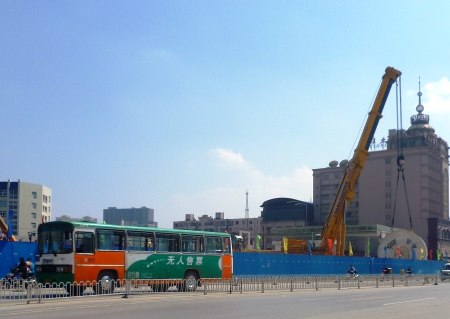 The wait for the debut of the first two lines of Kunming's urban rail network just got a little longer.

Lines 1 and 2 of the upcoming six-line metro network were previously scheduled to launch late next year, but now are expected to go online in early 2013, according to a Kunming Daily report.

Downtown construction of the two metro lines began in May 2010. Construction of a test portion of elevated rail near the new Luosiwan International Trade City began in 2009.

Line 1 will connect Xichang Lu with Chenggong, aka 'New Kunming', and Line 2 will connect Kunming North Bus Station with Fubao.

Government sources said that metro-related traffic disruptions on Caiyun Lu and Beijing Lu will cease by the end of the year and late June 2012, respectively.

In the meantime, the only urban rail option within Kunming is China's last narrow gauge passenger line, which connects downtown Kunming with Shizui to the west and Chenggong and beyond to the east.

All six lines of Kunming's urban light rail network are expected to be completed by 2018. A detailed look at all six lines and their proposed stations was made public last year.