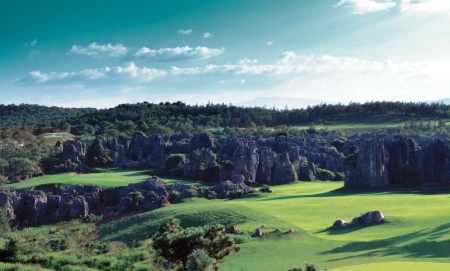 Just half a year after opening for play, Stone Forest Country Club has come under investigation for allegedly ignoring a government stop-work order, according to a People's Daily report.

The 54-hole, 4,050-hectare country club is located on a portion of Stone Forest, Kunming's biggest tourism draw and a UNESCO World Heritage site.

The country club and its three courses are located in Shilin Yi Autonomous County, where an official at the local redevelopment and reform commission and the deputy director of the Stone Forest tourist zone's management committee have been sacked and are now under investigation.

Construction on the 850 million yuan (US$130.6 million) Stone Forest project began in 2008. An assistant general manager at developer Yuantong Investment Company, which is overseeing the project, recently told CCTV that local officials had approved the project, which he said was completed before the delivery of a stop-work order in August 2010.

In 2004 a moratorium on construction of new golf courses in China was issued by the central government, primarily driven by the large amounts of arable land and water resources consumed.

But in a country where domestic companies such as car maker Chery and foreign companies including Carrefour have gotten ahead by ignoring such orders and choosing to "act now, apologize later", the golf industry has taken the practice to a new level.

It is now estimated that since the moratorium on new courses was issued, the number of courses in China has risen by more than 300 percent, from 170 in 2004 to almost 600 today.

Amazing that government officials in Yunnan can override the central government's protection of the stone forest as a national park. I'm wondering how much the green fees are and would be interested in the customer name list.

The government could use golf course registries to cross check with the tax bureau on who's paying taxes and who's cheating...

Clearly the green fees aren't the only fees in play here.

On a more mercenary note - gonna try to play all three courses, take oodles of pics, before the gov shuts it down...how many people can claim to have played golf on a protected UNESCO world heritage recognized site?