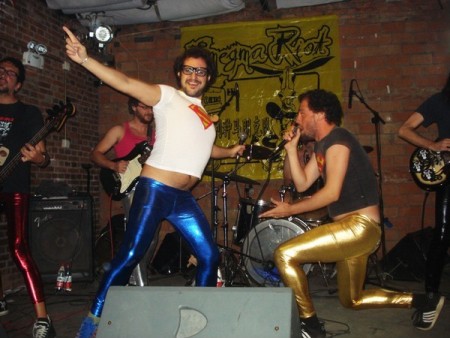 Seminal punk band Smegma Riot has long been a pillar of Kunming's rock scene. Known for raucous, drunken performances and occasional indecent exposure, the band has built up a loyal following in Kunming and elsewhere in China.

Over the years Smegma Riot has been one of Kunming's more prolific bands, releasing two EPs – A Lovely Touch of Brutality (2007) and Smegmo Ergo Sum (2009) – and one LP, Evolve or Die, which was released last year. This year the band will release a live album called Made in China and a remix album, The Future Sound of Smegma.

The band's lineup has changed a lot over the years, the only constant being front men Eddy Di Natale and Lucio Cascavilla, who are also the band's songwriters, penning drunken anthems including "Blame the Pope" and "Kill Your Boyfriend" (Check the band's MySpace page to listen to MP3s.)

It's been months since the last Smegma show in Kunming, primarily due to Lucio moving to Guangzhou. The band will perform tonight at Laowo Bar, warming up the stage for friends Gouride's final Kunming performance.

We sat down with Eddy and Lucio at The Box Thursday night and chatted over pizza and pitchers of beer:

GoKunming: How did Smegma Riot come into being?

Lucio: Our first band in Kunming was Spermatozeus, which we formed in 2004. That band broke up after a few months and then we started playing with a different group. Out of respect for our original bandmates we called the new band Smegma Riot.

Eddy: We didn't want people to confuse the sperm and the smegma.

GK: When was the last time the band played?

Lucio: October was the end of the Vaffantour, which was a tour of all China.

GK: How many tours has the band gone on?

Eddy: We've had two national tours of China, one southwest China tour in 2005 and many Yunnan tours. We've also played in Italy, including a show at a party thrown by the Italian Communist Party.

GK: Where are your favorite places to perform?

Eddy: Kunming is always amazing because we're surrounded by friends and people here know some of our songs. Guangzhou and Beijing are fun too.

Lucio: We also like the places we haven't played before. It's fun to meet new people, make new friends and maybe discover new kinds of alcohol.

GK: How many people have played in Smegma Riot over the years?

Lucio: More than 50, plus one stripper.

Eddy: We had a transsexual dancer one time.

Lucio: We've always played with whoever wants to play with us. In Kunming many people are just around for a few weeks or months, so some people might only play one show with us.

Eddy: We're a kind of collective. And it is from this that we got the idea to franchise the band.

Lucio: We want to be the first franchised punk band.

GK: Why did you decide to start a band in Kunming?

Lucio: We used to study in Naples and we would always go to great shows all the time. Bands like Rage Against the Machine and Manu Chao would play in the piazza for free.

We came to Kunming and we felt it was a little boring, so we decided to start a band. Then we started getting more women and drinking more – we're actually pretty shy so we have to get drunk before we perform.

Eddy: We saw that there were only a few bands in Kunming then and we wanted to create something for people to go to. We didn't know much about punk music, it was just the easiest musical style to start off with. Our punk background was not very strong. Actually, we play punk with Mediterranean characteristics.

GK: How did you decide on the name Smegma Riot for the band?

Eddy: There's a song by The Clash called "Guns of Brixton". We always thought they were singing "Smegma Riot". Our English is not very good.

GK: What's the philosophy behind the band?

Lucio: Indecisionism. It's like the Ramones said, "I don't wanna grow up". You can't play punk all your life, but we're trying to. We're also socialists... we like peace. We also enjoy fucking and getting drunk. 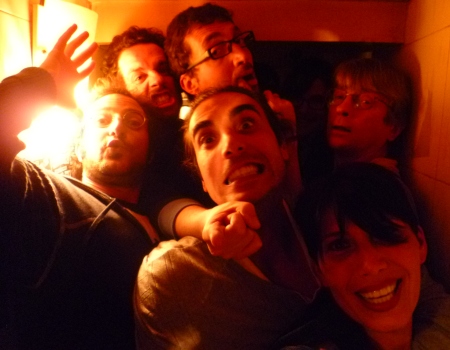 GK: You're going to play before Gouride's last Kunming performance, how much shared history do your two bands have?

Eddy: Lucio came back from Guangzhou because it's Gouride's last show. They're our favorite – how do you say it? – band friends. We started playing at the same time, we've played many shows together and we've also shared bandmates. Ling Ling was our drummer for a while and Nick will play with us Friday at Laowo.

We must pay tribute to Gouride for everything they've done. They really helped make a scene in Kunming. There are also some good Chinese bands that have helped make the scene: AK-47, Qimuguang and Cat Scratch Fever have all done a lot for the scene. But for a city of millions of people, Kunming doesn't have many bands. We're happy to make our little contribution to the city and for people who want to have fun.

Lucio: We've had a lot of fun together.

GK: What have been the highlights of your rock career?

Eddy: We have many good memories. One thing that sticks out for me is Beijing. We have what you could call a Beijing curse. Everytime we play there something goes wrong. In 2007 Lucio got superwasted and so we performed with only one singer.

Eddy: And at last year's Beijing concert our bass player got so wasted we had to finish the show without bass.

Lucio: We are full of good memories. So full that I'm writing a book about it. It will be published in January 2012.

One of my best memories was playing in Jinggu on a football pitch in front of 10,000 people. It was like we were Madonna.

Eddy: My legs were shaking when we went on stage.

GK: What should people expect from your show Friday night?

Eddy: We have a few surprises as usual. I hope people leave their safety belts at home.

Smegma Riot will play with the Tribal Moons and Gouride tonight at Laowo Bar. The free show begins at 9:30.

Honored to have hosted you guys for the interview, and thanks to Chris for waiting for your Lao small with patience!
W Smegmariot, W Smegma!

Smegma Riot... again live in Kunming...
in May 2007 i took a plane from GZ to go and watch the last concert of the Long March tour... it was great, had a lot of fun, and it s worth to pay a plane ticket to watch the concert... besides that all the rest was for free... i lived 2 days at Smegma Riot expenses...
they forgot to mention it on the interview, but actually Smegma Riot have a special Groupie policy... follow them in concert!!!! it`s all at their charges!!!!

i`m waiting for another concert in Guangzhou, maybe for the "mianfei jinkou" tour!!!!

my best regards to band

Is that second photo in the Box's bathroom?

@Giddyup! - Well spotted, it is indeed The Box's bathroom.

Aaahhhh. The bold and the beautiful.