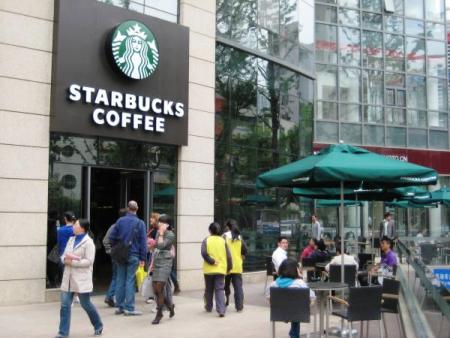 Starbucks, the world's largest coffee chain, is officially open for business in Kunming.

The company's first Yunnan location opened today in the Shuncheng Wangfujing Mall to brisk business and plenty of curiosity. Two more stores will open soon within walking distance of the Shuncheng location: one at Brilliant Plaza on Sanshi Jie and another at the new Golden Eagle mall on Weiyuan Lu.

Kunming is already well-known in China for its established café culture – the city already has dozens of independent coffee shops, many of which brew coffee with beans grown locally in Yunnan, China's largest coffee producer. 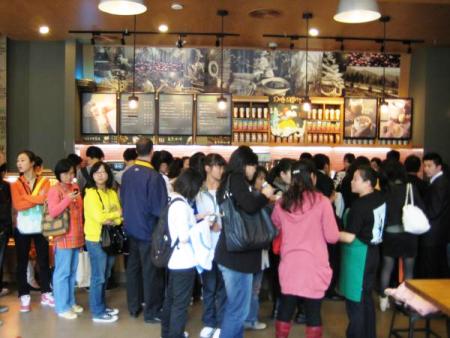 Starbucks is not only entering Yunnan by opening outlets in Kunming's fast-growing retail sector, it is also investing heavily in its first coffee production base, ironically located in Pu'er, one of China's best-known tea towns. The company also sources beans from Dehong and Baoshan prefectures.

Last November Starbucks CEO Howard Schultz visited Kunming to announce the signing of an agreement with the city of Pu'er and the Yunnan Academy of Agricultural Science to set up the production base, which is expected to help fuel the company's growth in China. The company intends to add 200 mainland stores in the near future.

In some cities around the world, the arrival of Starbucks is often feared by independent cafés, but that doesn't appear to be the case in Kunming.

"Kunming has a café culture, but most people here still primarily drink tea," one café owner told us. "The arrival of Starbucks will probably help expand the number of coffee drinkers in the city, which is good for everybody."

be sure to ask for half the amount of milk or else you just end up getting a drink that tastes like expensive hot milk. And if you're staying there to drink it ask for it in a mug—much better.

Just give it a skip altogether.

Nice for those who enjoy paying for the starbucks logo - but the independent cafe's all unique personalities and encourage relaxation. Starbucks always struck me as a rather cold, sterile, impersonal place - no personality.

It's a good thing to have Starbucks opened here in Kunming because this kind of coffee shop is obviously for the people who don't really know what is good coffee but to give them a chance to pretend that they enjoy having a cup of coffee in their hands.and thanks for taking all the "ma fan" customers away from my work coz I m working in a cafe where also in wanfujin...thanks starbucks

Sammi Soman: you are right. After seeing one news photograph of the 'customers' at Starbucks I am just very happy these 'I wanna look cool' customers, with too much disposal income, are there and not in my favourite coffee haunt. And Yodog, it really does often taste like a cup of hot (if you are lucky) milk. If you want it to taste anything like coffee you have to buy an extra 'shot'. Too often in China customers gravitate toward the big and famous, regardless of whether or not they receive value for money.

Hahaha yah Thx for Nick! Those kind of "I wanna look cool" ppl are really annoying and I bet they will ask if starbucks have some drinks that they are not selling even tho the menu is already shown in front of their eyes. Sorry for complaining too much about the customers in this forum.but I've seen too many rude ppl n the rich ppl who think that they can do everything to others in my work place...I m lucky that I can handle the rude customers but my colleagues have faced so many stupid non sence complain from the customers.I think the post around town"文明"is kind of useless because they don't even know what is respect and polite.

I had Starbucks when it was in Forbidden City 2006. Not like good coffee house coffee. Trendy - a place that people with too much money gravitate to.

The typical, hippy, whiny comments about Bucks. Most of you probably goto Starbucks, in fact I know it for a fact. Otherwise how would you know so much about the customers, drinks, menus in such great depth. Or do you stand outside and watch intently with jealousy? And who doesn't want to look cool? And who doesn't want to make a lot of money then spend it wherever they please?

It's true Starbucks coffee isn't really that great. But a lot of coffee here isn't. Don't you know there's a lot of cheap robusta in your cup of java but you just, don't, know. Because you don't know good coffee. Starbucks is the culmination of genius and hard work by Howard Schulz. Less talk more action, then you too will get the respect.

Wasn't Howard Schultz the guy that came up with Charlie Brown?

YOU state, "It's true Starbucks coffee isn't really that great." But then go on to say: "....you (meaning WE) don't know good coffee."

Just to add to the nonsense you go on to talk about Starbucks coffee which "isn't that great." is the "culmination of genius".

Clearly you've been drinking to much of the stuff.

Thx for the opinion :) I diffinitely don't know what I put in my mouth was a cheap rubusta or a cheap toraja but I did know if it tasted good enough or not tho.I would like to try different kind of coffee...do u know any good place for good coffee?That's what could please me for sure:)

Also we don't have to spend a lot to have a cup of good coffee in our hand...and we don't have to act to look cool if we r cool enough,don't u think so ?
I m not coming here to ask for respect but I think the least thing in our life is to be polite tho...we have been learning it since we were a kid ...no matter who u r,where u're from,what kind of family that u're from...it's a really simple thing to do tho.a little smile or to say "thank you"...nit that hard right?

And Nick...I would like to buy u n make u a cup of coffee,come on the 3rd floor of shuncheng,it is just next to the semi sugar,come here after 4pm...u will see a short girl with glasses standing in the bar... :)
I would also love to hear u guys opinion of our coffee n drinks.
Hope to see u soon
Sammi

When it's this easy to incite emotionally charged, recklessly thought posts you know you stepped on a few toes. Have a few laughs, it wasn't a personal attack.

In fact I was just defending the Starbucks team, composed of dedicated and hardworking people. Many who are passionate about coffee and coffee culture.

So, for you fellas, coming on to this board and sputtering about pricey cups of bad quality coffee and the customers who buy them, to me, is a cheap shot in itself. I used to be one of those guys, but I did something called self reflection.

I readily accepted the defence of the Starbucks team, allegedly composed of dedicated and hardworking people, many of whom are passionate about coffee and coffee culture. After all, this is Kunming and Yunnanese people often manage to defy the banality of other regions. They could so easily of overcome the ever present contradiction of substance over mass marketing, the robotic 'have a nice day' replacing service and engagement.

1. Was very disappointed with my first Chinese Starbucks experience. My chicken panini was served frozen and my grande cappuccino was half full. The cakes and pastries looked delicious and were affordable, but the poor service and indifferent, confused waitrons make me reluctant to go back.

2. I escaped from Shanghai, only to find Kunming becoming Shanghai-ed.

The McDonald's of coffee houses: good enough for a quick fix, but you always feel a bit guilty about it afterwards.