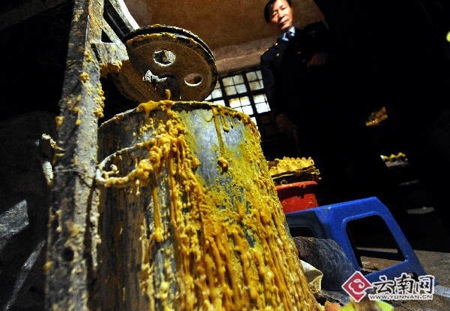 The investigation was sparked by a tip from a Yunnan Net reader on Monday regarding an allegedly unlicensed and filthy workshop producing snack cakes in Shuangfeng Cun (双凤村) in Kunming's Guandu District.

According to Jiang, one worker, who stated he was wearing a surgical mask to try to suppress the odor of the eggs, was using flour that appeared to have an unusually gray hue and mixing it with a red powder: the resulting mixture suddenly became bright yellow. Flies hovered in the air and a stray cat came in at one point and hopped up on a table of cooling cakes and walked around. 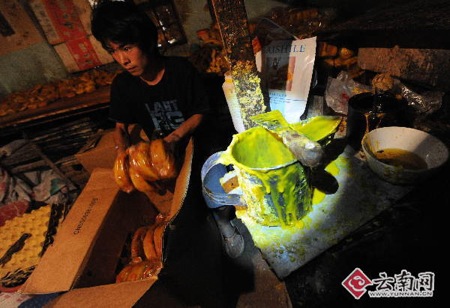 After the reporter called local health authorities, a group of employees from the Guandu district government raided the workshop.

A third man who looked to be in his late teens or early 20s had appeared at the workshop since the reporter's initial visit. He identified himself as the workshop's boss and showed a food production license. After further questioning from the skeptical government employees the unidentified man admitted that the license was a fake certificate he had purchased on the black market for 2,000 yuan (US$306). 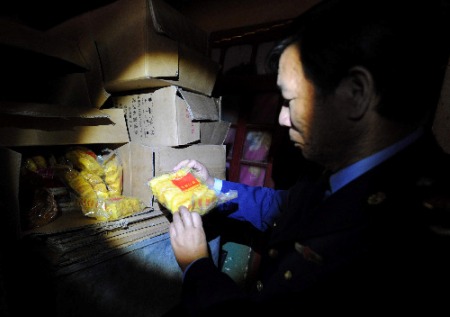 The workshop had been producing a variety of shapes and sizes of cakes, decorating their packaging with slogans including "superior quality" and "glamorous new generation" and selling them to shops and restaurants at the Kunming railway station and the city's long distance bus stations.

Yunnan Net's Jiang visited convenience stores and shops near the railway station and discovered more than ten kinds of cakes that resembled the cakes from the raided workshop. Priced cheaply, the cakes were selling briskly.

There is good purpose for harsh punishments in China after all...

So what's the moral of the story?

Get a real license? Know your customer?

Make your own cakes!

All the more reasons to feel suspicious about carbs!