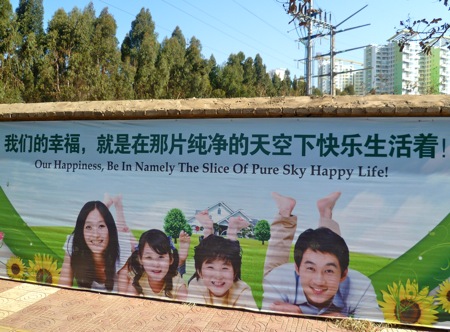 The diamond industry would like many Western men to believe that they should spend one month's salary on an engagement ring before asking their girlfriends the big question. But Kunming's booming wedding industry may have taken it a step further, extracting from many young couples more than they could hope to earn in a year or two.

One local media outlet has taken the occasion of Valentine's Day to look beyond romantic love and examine the financial side of nuptial bliss in Kunming. The result is some illuminating conclusions, including that Kunming residents are now spending about twice what they did a decade ago on getting married.

It has become common here to spend 100,000 yuan (US$15,000) to get married, with many couples spending significantly more, according to a Kunming Information Hub report. But the average annual salary in Kunming was only 26,169 yuan in 2008—the most recent year for which figures could be found.

By Western standards the 100,000 yuan figure is inflated because cultural norms in China dictate that many couples also spend money when they get married on decorating and furnishing their new home.

But significant amounts of money also go into the wedding ceremony itself and associated costs. In fact, such large amounts are spent that the "wedding ceremony market" in Kunming is now worth 3 billion yuan (US$455 million) annually, according to another Kunming Information Hub piece.

Wedding banquets, which often involve feeding multi-course meals and furnishing drink to hundreds of guests are only one part of the chunk of money that a young couple, particularly the bride-to-be, spends on the act of getting married.

The average price of pre-wedding photographs in Kunming has risen to 2,300 yuan. But, of course, the actual price of the often garishly sentimental photos does not include the price of preparing to look one's best for them.

"Three months before she was to get married, Xiao Duan came here to prepare for her wedding because she was relatively fat," the manager of a Kunming women's spa told Kunming Information Hub about one of her clients.

"When she was being fitted with her wedding dress she gave the appearance of 'the tiger's back and the bear's waist' (虎背熊腰, a thick, stocky build). Therefore, we put her on a weight-loss regimen and started a series of facial treatments."

The manager said that Duan was so pleased with her 3,000 yuan worth of spa services that she returned after her marriage to show staff members her wedding photos.

Other costs, including clothing, gifts for guests at the wedding ceremony, floral arrangements and transportation can add up quickly.

One new bride told a reporter that she and her husband had spent 100,000 yuan on costs associated with their wedding ceremony and another 130,000 on decorating and furnishing their apartment. She stated that she felt that they had only spent money on things that were absolutely necessary and had only ended up with average-quality goods and services in return.

So what has been the result of the conjugal spending splurge in Kunming?

Not promising as it turns out, in perhaps some small proof of the adage that money can't buy happiness: divorce rates, particularly among younger couples, have edged up to a one divorce per every three marriages in recent years.