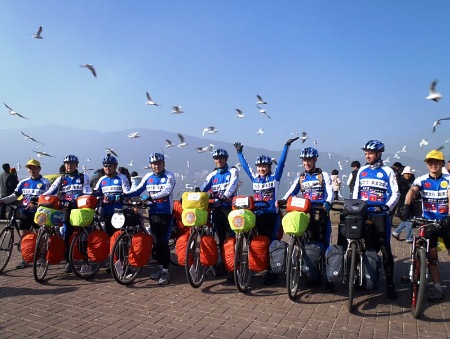 Preparing to leave Kunming at Haigeng

After all the introductions and formalities to introduce our event "Cycling Southeast Asia, 2011: Messengers of Friendship," we set off from Kunming, crossing the bridge over Dianchi Lake towards Xishan. From there we had a wonderful ride paralleling the highway all the way to Haikou. It was especially sweet for me as the roads were the best I've seen over our first seven days as was the weather, and Chris Horton from GoKunming let me ride in his slipstream the whole way! 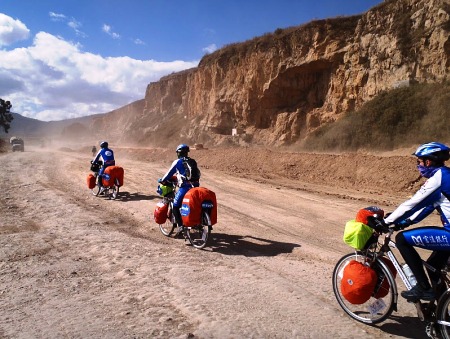 After lunch, our friends left us to face the dusty roads ahead and eventually the rain too. From Haikou to Yuxi it's about 60km, and for about 10km at the base of Dianchi the road turns to dust, and is very slow going. Shortly after the road gets better, you pass the famous Chinese explorer Zheng He's hometown of Jinning. A short incline at about kilometer 65 for the day, and then a nice long descent, being careful to avoid the truck traffic. 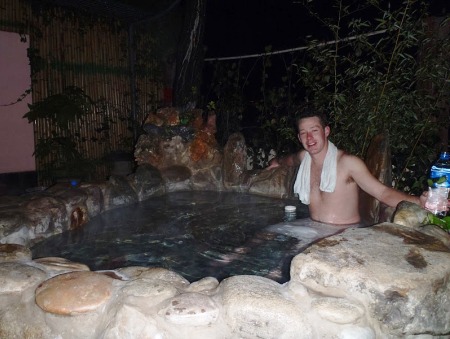 Unfortunately, the end of our ride was met with some heavy rain, but it was all worth it in the end, as just two kilometers west of Yuxi there is a natural hot springs and every room in our hotel was decked out with its own personal outdoor hot (spring) tub!

We were all thawed out from the previous day's rain and mostly dry. It was looking like the weather was going to clear up, but sure enough, as soon as we started out it began to rain, and it continued all day.

There is a mild climb coming out of Yuxi, and the road is being rebuilt. For about 10km the mud was so bad that even motorcycles couldn't get through. Luckily most of the worst parts are on a long descent about 15km into the ride, and if you're brave enough you can ride most of it. 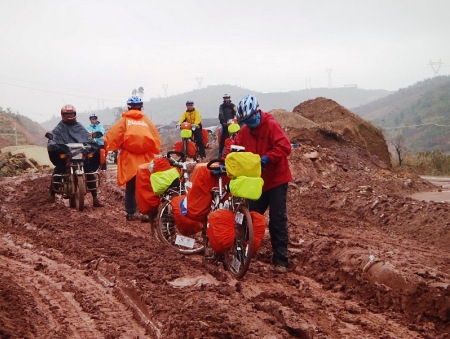 I'm not sure how smart it was, but I rode/slid down most of it and my bike was caked with mud. We had a nice lunch in Eshan (峨山) at the base of the mountain and stopped at a car wash to hose down our bikes.

From Eshan it's about 35-40km of great cycling, winding through the mountains with lots of small hills to zoom up and down. We finished our ride with an 18km descent to the town of Huanian, tucked in a valley of white plastic farmland. We arrived late and found no open restaurants, so had to settle for some instant noodles in our cold hotel room, quite a change from the night before! 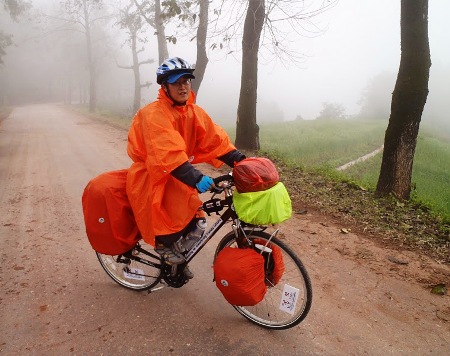 Another cold, rainy day... beginning to reconsider biking in Yunnan in January, but I still think it's worth it as it's only tough riding when it rains, and I think rain three days in a row is pretty rare here. Great roads all day today, with some big climbs, but even bigger descents.

The scenery in Southern Yunnan is breathtaking and you can really begin to realize its incredible productivity. On the way today we passed several factories, including one massive steel plant, and endless amounts of healthy farmland planted with just about anything you can imagine. We had a few technical difficulties today including two flat tires and some minor adjustments on brakes and derailleurs which slowed us down quite a bit. Around dusk we descended into the pleasant town of Ganzhuang. 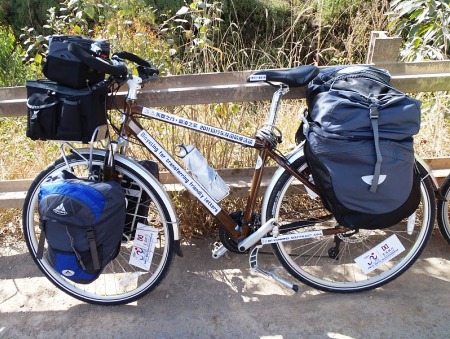 In retrospect, we should have done more miles the day before to cut off some today. The day started with an 8km warm-up climb. A short, fun, but somewhat unsatisfying descent followed and led us into a massive climb at about the 13km mark. From here we began to slowly climb for what seemed to be most of the day.

About 10km up there is a hot spring, and if you climb down to it you can have lunch while soaking your feet in the 43 degree (105 degrees Fahrenheit) water. Lunch was basic: eggs boiled in the hot spring – not in the same water we were soaking our feet in – and cold rice noodles. After lunch we continued to climb the rest of the 35km hill, gaining 1,600 meters in elevation. A series of smaller hills followed, the last being an excruciating 7km climb until our final descent into Mojiang.

Mojiang is a big town with plenty to do, for one day at least. We spent the day with a tour of the famous local rice wine distillery, Pure Yunnan (地道云南), a photoshoot at the park where the Tropic of Cancer runs through, and a visit to the Twins Spring. Mojiang is famous for the number of twins that have been born there and it hosts an international twins festival. The rest of our day was spent fine tuning the bikes and resting our sore muscles. 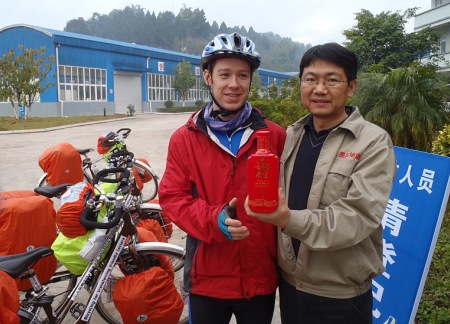 Millett contemplating lugging baijiu up the next hill

After reluctantly accepting some gifts of rice wine, we hopped back on Old Road 213. The morning was filled with some great cycling, we whipped through the countryside. A great 15km descent down to a large river ended our morning and we had a delicious lunch just on the other side of the bridge. Some of the specialties were wild bitter fruit (山苦果) and some wild olives that mildly resembled the taste of olives. 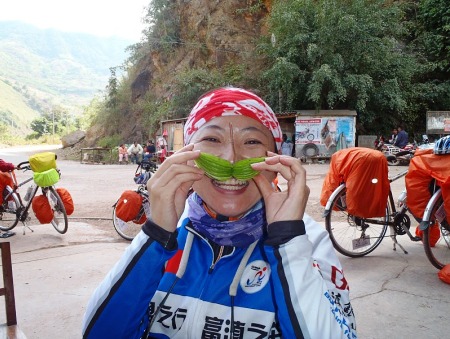 After lunch, we followed the river upstream for about 25km, soaking up the beautiful view of the fertile valley. Towards the end of the day we began climbing slowly back up to the expressway and over a mountain. Some amazing views of the sunset and then a couple of kilometers' descent into the new town of Tongguan. The hotel was nice, but there wasn't much in the town except for a "park" on top of a nearby hill with a golden Pegasus on top. There is a poorly built museum there too, showing off some artifacts of the Old Tea and Horse Road. If possible I would look for lodging in the old town of Tongguan just before you get to the new town. It seemed a lot more lively. Feibao with the mayor of Tongguan

A late night of drinking with the mayor of Tongguan and a long morning of him showing us around and giving us bricks of tea (...great, more weight to carry) meant a late start, but we still managed to do almost 90km. In between the old and new town of Tongguan, we bore right down the hill and cruised the 17km descent to the river. From there the road flattens out and follows the river for quite some time. The road is great for cycling here and the views of the river bank and coffee plants are breathtaking. A nice short day, but still not one to joke about. Again, we were riding in heavy traffic, and with the rain it was quite miserable. Pu'er sits considerably higher than Ning'er and we most definitely felt it. Climb after climb with very short descents. I was surprised by the integration of the coffee and tea plants everywhere and wondered about the benefits; a peaceful sign, maybe, of bringing our differences together.

We spent a wonderful night in Pu'er as guests of Fudian Bank which was followed by wonderful weather all day. Unfortunately, one of our team members, Jin Feibiao (Feibao's older brother) fell on a descent early this morning before the road had a chance to dry. He rode another 20km to lunch, where he took a van to Jinghong to see a doctor. The diagnosis was a broken collarbone, and he flew back to Kunming for further treatment. He will be certainly missed on our trip.

Out of Pu'er we hopped back on Old Road 213 (a left turn at the southwestern end of the city). The road climbs for the first 5km and then descends quickly for about 8-9km more. A section is under construction at the 22km point making the short climb quite difficult. The rest of the day sees only small hills until the 68km mark where it begins to climb all the way to Dadugang at the top of the hill – be sure to stay right at the fork at about 76km to continue up and not down to the expressway. Dadugang only has two hotels and the one down the hill is basic, but with hot water and all rooms are on the first floor.

It was a bit cold on top of the mountain this morning, but after a great breakfast feast of rice noodles, youtiao and bean soup, little baozi, and dumplings we headed out into the fog.

The first 10 km was a wonderful warmup, we were shooting up and down atop the ridge. If it hadn't been so foggy, I'm sure it would have offered beautiful views of the surrounding tea country. After the warm up, there is a fast 11km descent back to the expressway and into the Xishuangbanna Nature Reserve. From there the old road continues to decline, winding around the hills as the expressway cuts right through them. At kilometer 47 for the day the road flattened out and a few kilometers later we had lunch at Xiaomengyang (小勐养).

Just before the town there is an intersection with the expressway. The first left is the expressway and the immediate second left heads towards Mengla. If you take the second left it is only 23km to Jinghong on all new roads. We were told the old road was much longer and a lot harder to bike. The new road was indeed nice, but you had to first climb a steep 6km hill before the long fast descent into Jinghong.

At the first traffic circle take a left and follow it to go over the bridge and soak in the views of the Mekong and the city. We took ten days getting here, including one day's rest in Mojiang. With our group size and heavy loads, I would say we did pretty good. Feibao and Millett above the Mekong, known in Jinghong as the Lancang River

If you were just two people with light loads it could easily been done in a week's time, but don't forget to take some time to absorb the beautiful sights of southern Yunnan. From here we will head south to Mengla and across the border into Laos where we plan to take a month cycling from the north to the southern tip. Follow along at my blog (VPN required in China) or wait for my next post on GoKunming.