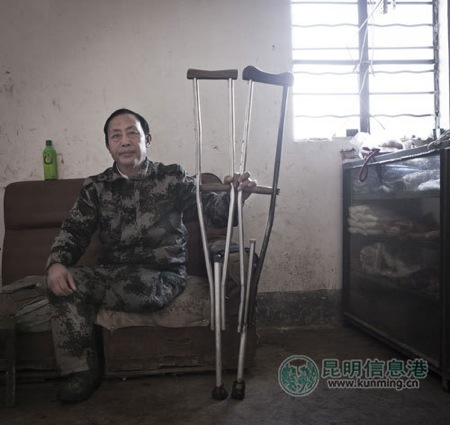 Yang Zhuasao, a villager disabled by a land mine

Unexploded land mines are a threat to the lives of rural residents of Vietnam, Cambodia and Laos, but few realize land mines are also a major danger near China's border with Vietnam.

Approximately 6,000 people have been injured by mines in Wenshan Prefecture in southeast Yunnan since large numbers of the explosive devices were first laid along the border during the 1979 Sino-Vietnamese War, according to a recent Kunming Information Hub report.

It is estimated that more than two million mines were laid near the border.

The most heavily affected villages tend to be home to members of the Miao ethnic group, many of whom have been living without one one or both legs for many years. Yang Zhuasao, a villager living near the border, has stepped on mines twice in his life, leaving him with painful shrapnel in his right leg and no left leg.

He now runs a store and receives 660 yuan (US$100) per month in government compensation.

Government agencies offer reimbursement ranging from 360 to 5,160 yuan per month to victims of mines left over from China's war with Vietnam three decades ago. The government also helps victims get fitted with free prosthetic legs and find jobs.

The land border between Yunnan and Vietnam was finally completely demarcated in December of 2008, 29 years after the brief war and 18 years after China and Vietnam normalized relations.

"Counterattack against Vietnam in Self-Defense" please. Those nasty imperialist Vietnamese had it coming for threatening the existence of China and Chinese culture.

There are NGOs that help with landmine detection and clearing. I wonder if Yunnan (aka China) and Vietnam would be interested (probably not) in funding a grant. Failing government support, there's always UN, ASEAN, and APEC (not sure about APEC).

Landmine detection and defusing/disposal is high risk - especially given the relative age of some of these things - so I'm DEFINITELY not volunteering for field work.

Dan (Editor) if you're willing to point me in a direction - I'd be willing to spend some time to solicit pilot government and NGO funds to clean up at least one designated area - once the pilot is successfully completed - other sites are just pseudo-franchise opportunities - aka scalable.

We could post the steps (successful and failed) online along with the overall successor failure of the initiative - kind of like a business intelligence or project management dashboard...