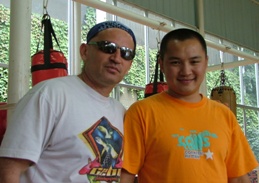 I had heard about the boxing scene in Kunming long enough and had to check it out for myself. I arranged to meet the man that people around Kunming simply know as 'Tiger' at the Expo Garden Hotel's gymnasium.

"Come down around two," Tiger said on the phone earlier in the day, "you can see some sparring."

When I arrived, I was expecting to see some pugnacious youths dancing like butterflies and working on their bee stings. Instead, it was two girls in their late teens exchanging wild jabs and body blows. Kunming's boxing scene must be bigger than I had originally thought.

After Tiger (who refuses to disclose any part of his real name) came over from ringside to join me in the seats, I noticed that the next match was boy-versus-girl. First time I had seen mixed-gender boxing.

"They're only sparring," Tiger reassured me, "We're getting the girls ready for the National Women's Amateur Boxing Championships next month." It turns out the very same gym will host China's best female amateur boxers this September 13 through 17.

Tiger would know, as the international liaison for Kunming-based Zovi Promotions, this is part of paying his dues. The bulky and do-ragged New Zealander was quite frank about why he's involved in his essentially pro bono work for local amateurs, both women and men.

"We promote professional boxers, but it's important to have good relations with the government, so we help amateurs in order to develop connections that we might not have otherwise," he said. There's a lot of connections to make, as there are city, provincial and national officials involved in different aspects of the sport.

Tiger's three years of work with Zovi Promotions in Kunming and around China have made him one of the few foreign experts on the Chinese boxing world, which he says has most of what needs, except for high-quality talent.

"China's got sponsors, broadcasters and viewers... but it doesn't have the product."

Looking on as a mixed sparring match ended in a draw, he compared China's current boxing scene to that of Russia.

"Ten years ago, Russia didn't have any champion boxers, now it has the world heavyweight champion... China could also take ten years."

In general, it takes 20-25 fights or three to four years before a fighter is able to reach world-class stature, he said, with fighters able to reach regional prominence in Asia in one to two years. To help develop Chinese boxers and give them exposure to international competition, Zovi puts together two or three big boxing events a year in China, with about ten smaller promotions throughout the year as well.

Tiger sees a bright future for the sport in China, which he bases upon his socioeconomic observations.

"Fifty or sixty years ago was the peak of boxing in developed Western countries, because there were more working-class people. China is very much a working-class country, so the sport is very accessible to the average person," he said.

China is also full of poor youth who look at professional sports including boxing as their best shot at a good life, he added.

At present, Kunming, Chengdu, Shanghai and Shenyang are the cities in China with a keen interest in professional boxing, Tiger said. But there is much more to do.

"The only way to develop the sport here is to have regular boxing events in every province."

Why is Kunming a good base for boxing promotion in China? Tiger cited the benefits of high-altitude training, the city's good weather and the relatively good facilities available.

However, the most important thing for further development of Chinese boxers is international experience, he said. That's where he plays his role, helping foreign fighters come to China plus working to send Chinese boxers out into the more competitive international ring.

He also mentioned cultural perceptions that are hindering the sport's development in China.

"Many Chinese think of boxing as a bad boy sport," Tiger said.

I diverted my eyes to the ring, where three-time national women's amateur champion Dong Chen was pummeling an unlucky young man into the ropes. Perhaps it's not a sport for bad boys, just badasses.

Tiger can be contacted at zoviboxcom(at)yahoo.com