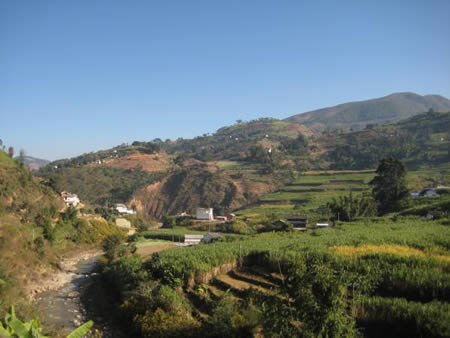 Last year, we made a bike trip to the Vietnam border. This year, we took a more westerly route, bound for Yunnan's tropical region of Xishuangbanna, and its capital Jinghong (景洪).

We started our trip by cycling to Kunming's West Bus Station to hop a seven hour bus to the city of Yunxian (云县) in Lincang prefecture. Yunxian's a pleasant enough town — we spent the afternoon exploring it by bike, as a gentle warm up. We clocked 23km for the day.

Day One: Yunxian to Bangdong Xiang
We hit the road around 9am, and rode out on Caopi Jie which took us onto the G214 highway. Along the highway, there was thick fog, and visibility was around 40m. We're glad we brought lights, and plenty of warm clothing. After around 12km, we turned right onto X274, a pretty riverside country road that was light on traffic, but a little rough. The road goes steadily uphill for around 23km. At the turnoff to Yongbao (涌宝) the road goes downhill again for a gradual riverside descent. 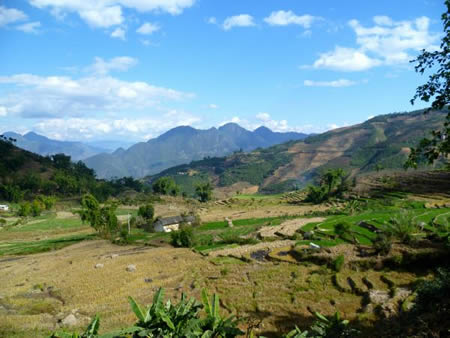 After about 72km completed, the river turns east to enter the Lancang River (Mekong River) and we diverge from its valley to begin a succession of climbs and gliding gradual descents. At Dachao Shan (大朝山), be sure to take the right towards Paifang (牌坊), rather than the new road leading straight on, which seems to terminate deep in the valley. Bangdong Xiang (邦东乡) lies at around 1640m above sea level. We'd been on the bikes for 5hr45 and covered 105km.

Day Two: Bangdong to Wujia
The day started with a hardish 9:30am start on ascending or flat roads. After the small village of Heping (和平) a sweet descent begins — the surface is good, and there are awesome views of the cloud-filled sunlit Lancang River valley to the east. This descent leads into an undulating contour ride, and we watch the kilometre markers tick down. 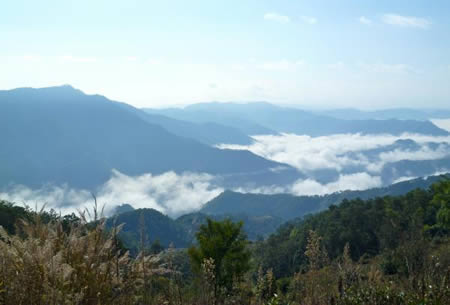 Mekong! Just before the 42km road marker, we catch a view of the turquoise river down in the valley. We begin a descent away from it, into the valley of a tributary. Here the road splits, with a road going over the range to Lincang (临沧) in the west, and a smoothly cobbled road to Matai (马台) going south. We go south. 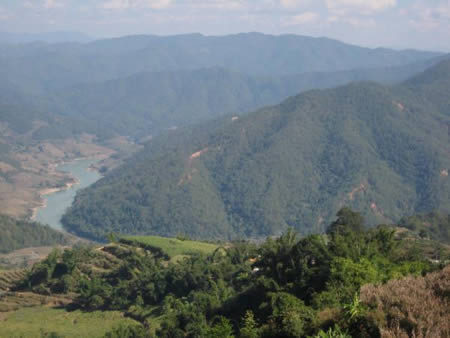 We advise any who follow in our footsteps to take the Lincang road, unless you're ready for poor surface and some unclear navigation. After Matai, the road is surfaced with spiky cobblestones. The road quality gradually declines, much of it becoming dirt. In wet conditions, it would be very difficult to ride. The reward for our struggles (it's debatable as to whether it's enough of a reward) are some great views of the Mekong, and a feeling of being really off-the-map. We finish in the dark, popping out onto the G323 highway near its bridge over the Mekong near the small village of Wujia (吴家). We'd ridden 113km in 7hr50. We're now 970m above sea level.

Day Three： Wujia to Qiaotou
Fog again. The G323 highway is under repair, and uphill. We cover the 22km to the intersection with the G214 highway in 2 hours — i.e. slow, but we've climbed to 1650m above sea level. It gets worse. Large chunks of the G214 between Lincang and Lancang (澜沧) are under repair, with many diversions due to bridge building and landslides. There's one detour that took us right up into the hills, surrounded by sugar cane plantations. 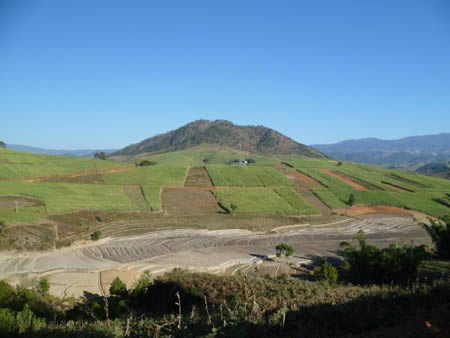 We get some good road around Shuangjiang (双江) but it deteriorates again. Night falls. We affix lights and proceed. Big truck behind, big truck in front: bike sandwich. It's dark, the road's unsurfaced. It's dusty as hell. "If I go down, I hope the truck driver behind finds the brakes in time." It can't be worse. We find a tiny lo-fi place to stay just after the intersection with S314, where there's an army passport check.

Day Four: S314 intersection to Lancang
We start out early, too early for the small shop and the restaurant to be open, hoping to make fast progress to the first town. Things look promising, and we cover 27km in 1hr10 on nearly-finished road. Then we hit a road block. As we have bikes, and we're able to carry them over obstacles, we're allowed through, but "be a bit careful." 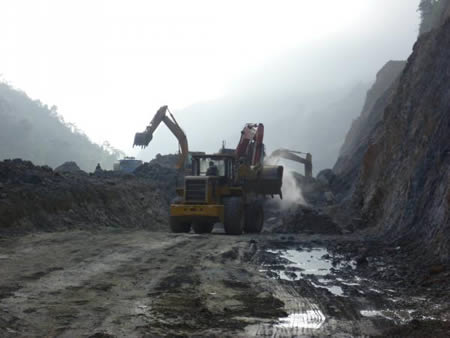 We spend the next few hours making exceedingly slow progress over the next 10km. We're held up several times, either by blasting, falling rocks or excavators... After slogging through the umpteenth mud pie section of road, we decide to hop on a bus. 60 yuan a head, and five hours later we're in Lancang. The road we covered on the bus was in a terrible state, and we decide we've made the right call. Barbecued chicken legs and beers end the day.

Day Five: Lancang to Menghai
Careful map reading implied that today would be emm-shaped: climb, descend, climb, descend. And that's pretty much how it panned out. Both climbs are substantial, with the first probably the harder, though the second is a grinder, long with low gradient, topping out at 1530m. Between the climbs is a steady spin across a wide valley to Mengman (勐满) where the second climb starts to show itself. After the second climb is a similar steady spin, first into Mengzhe (勐遮), and then on into Menghai (勐海). Headwinds gave us a bit of work to do towards Menghai, but it was satisfying to arrive in a substantial destination under our own power and in daylight. Amazing what a bit of asphalt does: we'd covered 120km in 6 hours. 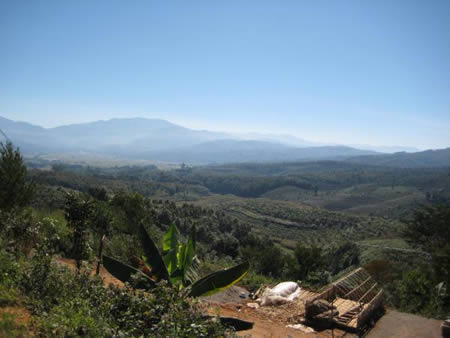 Day Six: Menghai to Jinghong
We set out for the final day expecting a flattish 60km to Jinghong on similar terrain to the end of day five. The first third was a little hillier than we'd expected, and cold due to the ever-present morning fog. We found ourselves going up a steady grinder climb that tops out at around 25km, which in turn led into a speedy 15km descent. A flat spin across the valley brought us to Jinghong, and back to the Lancang River - 58km in two hours dead. A satisfyingly fast ride.

Sounded like a rough trip, but the pics look great. Any chance you can post a map of the route?

Where can you get a good cycle map for trips like this and/or around Kunming.

Seems a great trip. Im wondering if you guys have plan in the summer for this kind of trip.

For navigation, we bought two books of Chinese-language Yunnan road maps from a bookstore and made a careful study of Google Maps and Google Earth before starting. Most maps are out of date and we had to do a lot of navigation guesswork along the way. We used gps and gprs on our phone to check our position on Google Maps where service was available, and the compass I had strapped on my handlebar was very useful for making sure were were generally headed in the right direction.

i m new in kunming.and my friend told me to check out this website.i like biking.when have this kind of trip again?plz contact me if u have time.
msn:victoria_vic@msn.cn

There's a much more pleasant 'old road' that descends from Menghai to Jinghong that is less steep and has far less traffic. Hard to find though, even when I knew about it and lived in Jinghong it took me a few tries to get it right!

I read this post with interest. Although, I am not a biker, I will do a part of your route by hitch-hiking.

Would you be so kind to describe road sections from Lincang - Lancang - Menghai - Jinghong in terms of car traffic? Are there a lot of cars? Do we stand a chance to get a ride?