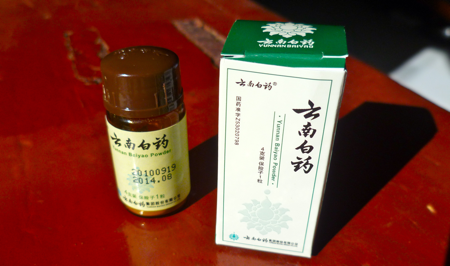 The future of the state-owned Yunnan Baiyao pharmaceutical company is looking dimmer after news that Chinese netizens found a list of the supposedly secret ingredients to the company's eponymous Baiyao herbal medicine last month—published on the websites of Amazon.com and the Food and Drug Administration (FDA), the American regulatory body for pharmaceuticals.

Said to have been invented in Yunnan in 1902 by an itinerant herb collector from Jiangchuan County named Qu Huanzhang (曲焕章), Yunnan Baiyao (云南白药 or Yunnan white medicine) carries the seemingly contradictory claims of both helping blood to clot and also promoting circulation of blood through the body.

It has grown into a popular remedy in China for everything from joint aches to serious trauma. The Yunnan Baiyao company has also used the strength of the brand to expand its product line to include external pain creams and even toothpaste.

Yunnan Baiyao pills are rumored to have first come to the attention of the United States during the Vietnam War. American soldiers are said to have discovered Vietcong soldiers carrying small brown spherical pills of Chinese origin that when eaten allowed them to survive otherwise mortal gunshot wounds.

One of these "insurance pills" is still included with each package of the powdered and capsule versions of the medicine with instructions to take it in case of "severe traumatic injury."

The medicine has long been known to be composed primarily of the Chinese herb pseudoginseng. But the other ingredients were a closely guarded secret, to the point that Beijing has declared it a "national level confidential product."

Yunnan Baiyao is one of the most famous herbal medicines in China and the secrecy surrounding its ingredients carries a similar mystique to the Coca-Cola formula in the United States.

So it was much to the surprise of Chinese internet users when English-language searches uncovered a list purporting to contain eight active ingredients of a liquid form of the drug in a document published on the FDA website that contains correspondence between the FDA and a distributor of the drug. 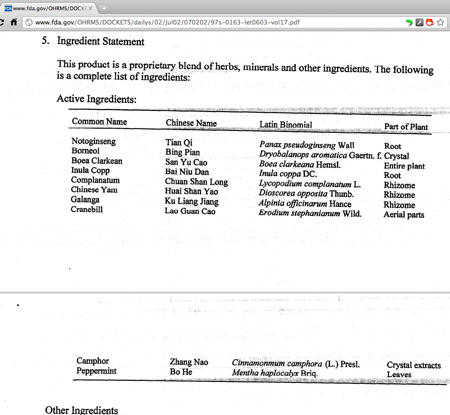 A document on the FDA website listing Yunnan Baiyao ingredients

Ingredient lists are also present in the product information sections for the powdered and capsule forms of the drug on Amazon.com.

The incident, which some Chinese media have dubbed "leak-gate" (泄密门), reveals a large chasm in regulatory policy between China, which allows Yunnan Baiyao to be sold without a list of ingredients, and the FDA which requires full disclosure of the ingredients of pharmaceuticals as part of their approval process.

It is apparently still unknown how the distributor or Amazon vendors gained access the ingredient lists.

Although the proportions and exact manufacturing processes are still unknown for Yunnan Baiyao, this development opens the door for copycat products based on the formulation.

So after stealing US trade secrets and technology for years, the Chinese are actually butthurt about their supposed "secret" ingredients being leaked from the FDA?

Rather interesting how this is a "state secret." I assume Qu Huanzhang sold the ingredients to the government way back when.

Aside from that, I'm quite happy to know the FDA won't let anything be sold in the United States without a list of the ingredients. Now I know why most of the foods sold at Chinese markets in Chinatown were of Taiwanese origin...although I must admit in saying so I don't know whether the Taiwanese require full disclosure or not.

In referring to 'the Chinese' and 'the US' I assume you mean certain bureaucracies located in China and the US. A common way to speak, admittedly - but doesn't it (subconsciously) corrupt the way we tend to think? Surely only a tiny percentage of real people are involved - we all know this, of course, and we forget it all the time. No blame on JHC, just a reflection that, um, we might all reflect on more often. Managed thought is dangerous and manipulative, let's not assist the managers out of carelessness and lack of attention to what really goes down.

Well wikipedia.com and yunnanbaiyaopowder.com say the formula is guarded secret of the company. We use Yunnan Baiyao for horses here in Australia. If they disclose the formula, it will be produced by tens of companies in China tomorrow. To me it is unclear whether the leaked list is real. Never underestimate Chinese ))

December 4, 2021 "We're looking for native speakers who have the passions for working with children ages 2-6 to assist in multiple levels. If you love children and …"
Living in Kunming JanJal