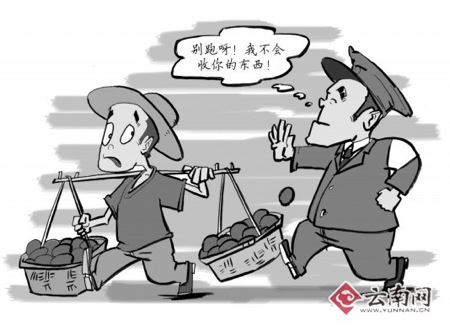 The speech bubble reads, "Don't run away, I'm not going to take your things."

Beatings, riots and even death have been the result in the past when Kunming's city management officers have tried to confiscate property from unlicensed street vendors.

But now, in an apparent attempt to stem such events and repair the oft-derided management officers' tarnished image, the department that oversees them has proposed a new curb on confiscations.

The proposed change in policy will in most cases bar city management officers from confiscating unlicensed street vendors's wares on the first offense. Instead, the officers—often referred to by their shorthand Chinese name, chengguan—will only be allowed to issue a written warning.

Chengguan confiscating carts and merchandise from unlicensed vendors is a common source of commotion on city streets, with local citizens and media tending to side against the chengguan, who are often perceived as thuggish.

In 2005 a vendor stabbed a chengguan officer to death while the officer was trying to confiscate the vendor's tangerine cart. This was followed last year by chengguan officers beating a man and leaving him lying bloodied on the street.

In March of this year, a small riot broke out and an angry crowd set fire to law enforcement vehicles after chengguan officers tipped over a 56-year-old woman's fried potato cart, knocking her unconscious in the process.

The new regulation is being proposed by the chengguan's bureaucratic overseer, the Kunming Bureau of City Administration and Law Enforcement, which has branded the policy as "first offense, no punishment" (首违不罚).

It remains to be seen whether the policy will have much effect on public perception of chengguan, given widespread public tolerance for and patronage of unlicensed vendors.

"The circumstances in Kunming are not suitable for vending on the street," said an official surnamed Liu from the Bureau. "It's much better that they set up a stall in a market, rather than sell things out on city streets."

A street vendor surnamed Li who talked to a Spring City Evening Post reporter agreed. He told the reporter that he had originally been a vendor at a Kunming farmers' market, but that the market had been demolished to clear the way for development.

"Now I depend on carrying around some fruit slung on either end of a pole to make a living," he told the reporter.

After assailing the chengguan's current rough tactics, he pleaded for the city to make street vending into a legal but regulated activity, with specific times and places where it is allowed.

I can only agree with the street trader Li. In other cities where there are specific places where people can trade, the traders themselves police the area and make sure that anyone trying to work in an unassigned place is stopped.

Street vending brings life to the streets of Kunming. When it is cleared away, it feels like the pulse of the city went with it.

Street vendors who behave sensibly are an asset to the city, not a curse.

And if its going to be reformed, its about time outdoor eating was allowed again too, so long as it is on private ground.

I haven't lived long enough in Kunming to see how the chengguan do their job. But I have seen chengguan all over China, particularly in Shenzhen, get violent with street vendors and beggars.

The new guidelines in Kunming will do nothing to stop extreme actions by chengguan. Who is to say that a given vendor is or is not committing a "first offense"?

Some readers might be thinking, why don't these vendors just "get a license"? My experience is that such permits can cost a huge amount of money, entirely beyond a typical street vendor. In Shenzhen, only licensed vendors can sell newspapers; such a franchise in Luohu, Shenzhen's oldest and somewhat dilapidated, runs at a minimum of RMB80,000.

Change will not come easily. In the meantime, foreign visitors to Kunming should not underestimate their potential power. If you see a chengguan getting nasty, speak up; if that doesn't work, take out your mobile and pretend to film the incident. I have done so, and many chengguan immediately conduct themselves in a more civilized manner.

I like the fact that they're knocking down all the markets and throwing up all these developments with carrefours in them. Nobody should have to buy vegetables that aren't wrapped in a kilo of plastic.

While I think it's fine to regulate prepared food sellers I really don't have a problem with people selling fruit or vegetables out of a van or a cart. These people are usually sensible enough to set up where they don't bother traffic as opposed to say the morons in huge black show off cars being absolutely fine with parking on the sidewalk so nobody can pass.

In my area they recently closed the two nearest outdoor markets and opened a new one below a brand new apartment complex. Our regular go-to-cha-shao-rou seller moved there and he told us rent was up 400 percent. It's not hard to understand why many people would consider an alternative. We roughly pay twice as much for our greens as the vendors buy them for, so again, not hard to see why some farmers would try to sell their stuff themselves.

The "First offence,," idea is meaningless -to no one's surprise, it's a government proposal after all- so hopefully they can come up with something better.

Bruce: It's probably enough just to stand there and look at them. Filming or pretending to film can get you in trouble, especially as a foreigner. It's grounds for deportation to film government officials, government buildings and the police or military "in action".

The street vendors earn an honest living and are a convenience to the majority. But some people don't want them because that's not the way it is in America!

Lesterness, are you suggesting the Kunming city officials are American, or the dark hand of the American government is influencing Kunmings policy when it comes to street vendors?