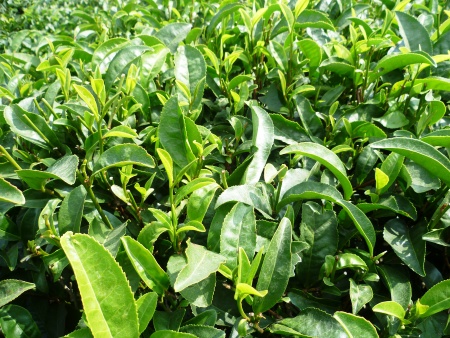 Pu'er tea growing outside of Menghai

Editor's note: GoKunming was recently invited by WildChina to visit stops along the Ancient Tea and Horse Caravan trade route with tea expert and explorer Jeff Fuchs, who has traveled the route's entirety. This article from the WildChina blog is reposted with permission.

There's no better way to understand tea than to see where it comes from and how the locals who understand it best enjoy it – that's exactly what we did in Menghai, a sleepy tea town in Xishuangbanna.

Menghai is best known for being home to some of the oldest – and best – tea plants in the world. With tea expert Jeff Fuchs as our guide, we visited the Tianlong Tea Shop, which is run by Yang Zhibiao (杨志彪), a Yunnan native who is as knowledgeable about tea as he is hospitable.

The tea that grows around Menghai comes from an assamica varietal of camellia sinensis, which is generally referred to as pu'er tea. There are three kinds of pu'er tea:

Shucha (熟茶): also known as chencha (陈茶), these are leaves that have aged and fermented naturally over time, ideally at least fifteen years, that brew a reddish-brown liquor with an earthy flavor

Cooked pu'er: a tea made by a technique in which a process is used to essentially cut corners and quickly create a product that resembles shucha, but is inferior in both taste and health benefits 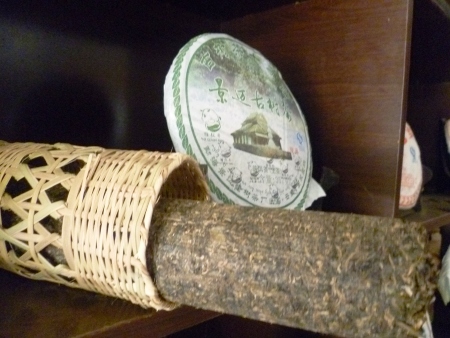 As you might be able to guess, Yang and others who take tea seriously in Menghai only drink the first two varieties of pu'er tea. As for cooked pu'er, he says the production process ruins the tea by destroying many of the healthy properties found in the leaves and reducing the antioxidant content.

Yang selected two varieties of shucha for us to sample, both of which were grown in the area. The first was laobanzhang (老班章) pu'er, which he broke off from a 400-gram flat round cake. He prepared a small pot with eight grams of dried leaves, which he said could be steeped 15 times.

Not every steeping of tea is the same – the first steeping opens up the leaves for what is essentially a parabolic flavor curve, with the third and fourth steepings the best. As Yang busily steeped and poured the tea, we sipped away, appreciating the subtle change in each steeping.

The laobanzhang started out with a subtle flavor with a mild, almost nutty quality to it. Over several steepings it began to open up to the palate revealing new layers of complexity. By the tenth steeping, we were noticing a distinct tea buzz that was more than just caffeine – tea contains around 450 different stimulant compounds.

Yang encouraged us to smell our small tea cups after emptying them. We did so, noticing a light but lingering aroma. Jeff explained that the smell of good tea should remain in the cup afterward, indicating a superior vegetal complex. He added that this was one of the tricks of the trade used by professional tea tasters. 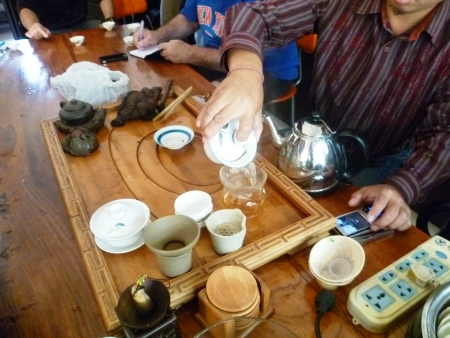 Next Yang prepared a pot of ziya (紫芽), or purple bud, tea for us to taste. The darker leaves produced a slightly more flavorful liquor with a pleasant hint of sweetness. These leaves have a slightly higher sugar content than other teas.

After the gentle crescendo and decrescendo of the pot of ziya, we were all feeling slightly wired, but not in the uncomfortable way that is associated with excessive coffee consumption. This is normal for people who don't slurp the vast quantities of tea that Yang and Jeff do each day.

Jeff offered us some basic tea drinking tips: don't drink tea on an empty stomach, and have a small snack such as chocolate on hand if you plan on having more than just a cup or two.

Before we left Yang's shop with a few cakes in tow, Jeff explained to us that in addition to his shop, Yang is working with local growers to create a growing collective that will focus on giving local growers a larger slice of the economic pie, while also focusing on the quality of the leaves rather than quantity. We raised our teacups to the future of his endeavors.

I loved this article! When I visited China in the past, I loved going to the tea shops and participating in the tea tasting tradition. The process is relaxing, informational and a wonderful way to get a minute slice of an ancient culture. I'm looking forward to my next trip so I can try the pu'er green tea.

i totally agree. I would class tea tasting as amongst the best things about Yunnan, which would include, inter alia, the fantastic weather and clean air, and excellent food.