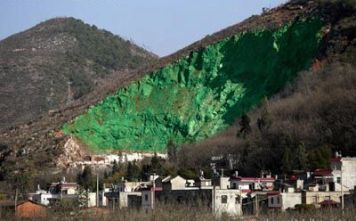 Fumin County, about 40 kilometers northwest of Kunming, has made its way into international news, and not for its good rock climbing spots. Officials in Fumin are having difficulty explaining how a quarried mountain was allowed to be painted bright green by a Sichuanese businessman in a rather literal and misguided attempt at 'greenifying' the mountain.

According to Chinese media reports, a Sichuanese businessman surnamed Du that had married a local Fumin resident had been advised to alter the fengshui of Laoshou Mountain, which had been quarried for more than 20 years, and which Du himself had quarried. Quarrying operations on the mountain were halted in 2000 due to resident complaints and environmental concerns.

During a period of lackluster business, Du had apparently sought the advice of a fengshui consultant, who reportedly told him that the quarried mountain was adversely affecting his business. Afterward, Du hired a crew of men to paint the entire quarried area bright green, a project that took 45 days. There are varying reports of how much paint was used, with the highest estimate by state news service Xinhua, which quoted the total cost of the paint at 470,000 yuan.