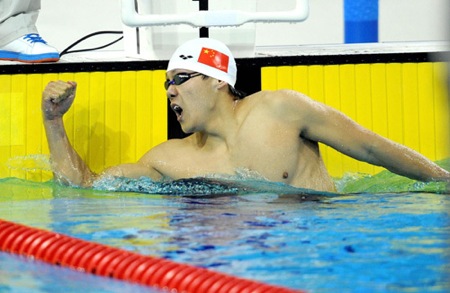 Swimmers Xie Zhi (谢智) and Li Xiayan (李夏延) became the first Yunnanese athletes to earn medals at the ongoing Asian Games in Guangzhou on Sunday when they went one and three in the men's 50-meter breaststroke.

Xie, 23, whom a media report described as a "dark horse," edged out silver medalist Ryo Tateishi of Japan by six-hundredths of a second to win in 27.80 seconds. Both Xie and Li, who earned his bronze with a time of 27.89 seconds, hail from Yunnan's Honghe prefecture.

All three top finishers faced less pressure than expected from 28-year-old Japanese swimmer Kosuke Kitajima, who earned the Chinese nickname the "frog king" (蛙王) after winning gold in the 100 meter and 200 meter breaststroke competitions at the 2008 Beijing Olympics. Kitajima tied for fourth with two other swimmers at a time of 28.15 seconds. 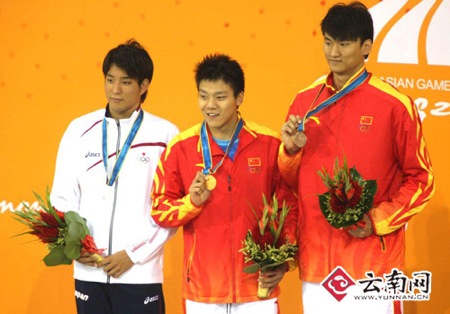 Chinese swimmers in general are starting off strong at the Asian Games, with four other gold medals in the pool as of yesterday.

The Asian Games is a quadrennial sporting competition with athletes from across Asia competing in a variety of sports. The 16th edition started Friday in Guangzhou and will run through November 27.