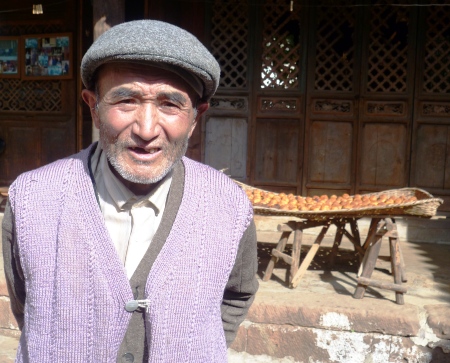 Editor's note: GoKunming was recently invited by WildChina to visit stops along the Ancient Tea and Horse Caravan trade route with tea expert and explorer Jeff Fuchs, who has traveled the route's entirety.

Walking around the quiet town of Shaxi in northwest Yunnan, it's easy to feel far removed from the bustle of city life. But for centuries Shaxi was an important stop on the ancient tea and horse caravan route, which connected traders from Tibet and throughout Yunnan and facilitated the flow of goods, primarily tea, salt, horses and herbal medicines.

The men who made this all happen were the muleteers, who would lead caravans of mules and horses on trails connecting Shaxi with Lhasa, Kunming, Tengchong, Lijiang, Xiaguan and elsewhere. The caravans stopped six decades ago, causing Shaxi's previously vibrant trade-based economy to languish.

Every year there are fewer and fewer people with living memory of the caravan days – but there are still a handful who remember. Ouyang Shengxian was a young boy during the last days of the caravan route, which was plied by his father and grandfather. Ouyang's 100-year-old courtyard home near the main square in Shaxi was a frequent stop for friends from afar bringing goods to trade. We spoke with the Bai septuagenarian to learn more about the last days of this forgotten trade route:

GoKunming: When did your grandfather start leading caravans?

Ouyang Shengxian: I'm not sure exactly when my grandfather started leading caravans. This home was built in 1912, and he'd already been a muleteer for more than a decade, so sometime in the 1890s.

GK: How did your grandfather get along with other muleteers?

Ouyang: My grandfather knew most of the traders in the caravans. They were all friends – traders would sometimes stay at our home and we'd cook for them. We didn't charge them anything, and they would return the favor when he'd lead caravans to their towns.

GK: Can you recall any particularly memorable stories from your grandfather's muleteer days?

Ouyang: I remember one time my grandfather had been leading a caravan back to Shaxi through Xiashankou and he was a bloody mess because while walking at night he slipped and fell into a cactus patch. That's one of the most vivid memories I have from when he was leading caravans – I don't recall much of my boyhood in detail anymore.

GK: What memories do you have of your father leading caravans?

Ouyang Shengxian: Not much, when I was six years old in 1947 he was murdered in Yunlong.

GK: Who killed him?

Ouyang: He was killed by a group of Bai and Han people, they knew that his caravans had plenty of goods and money. My mother was still pregnant with my younger brother when he was murdered, she had to raise us and our two sisters by herself.

GK: How often did caravans arrive from the outside?

Ouyang: There were always caravans arriving. The most frequent ones were from Lijiang and Xiaguan. Caravans from places like Tengchong and Kunming arrived less often because of the time it took to get here.

Ouyang: The largest caravans belonged to wealthy traders... their caravans would have 40 to 50 animals, mostly mules but some horses too, and there would be maybe 10 muleteers.

GK: What different ethnic groups do you remember coming to Shaxi to trade?

Ouyang: There were several ethnic groups that would come to Shaxi: Bai, Yi, Lisu, Han, Tibetan, Naxi and Hui were the most common.

GK: How did all the ethnic groups get along?

Ouyang: Most of the different ethnicities got along well, but there would be occasional quarrels or fights, which usually involved the Hui as they have hot tempers.

Tibetans and Yi tended to be the kindest and best-behaved. The Tibetans were very honest, but if there ever occurred a problem in your business dealings with them, they would never do business with you again.

GK: Caravans to Shaxi generally came from Tibet and elsewhere in Yunnan, what were the Tibetan caravans like?

GK: What did the caravans from the south bring up to Shaxi?

Ouyang: Muleteers from the south would bring tea, cloth, alkali and some daily necessities from their regions.

GK: Did caravans ever steal from each other?

Ouyang: People were always trying to steal each others' horses. The safest thing to do was to store them in a courtyard and tie them together.

GK: How important were the caravans to Shaxi?

Ouyang: Shaxi's economy depended on the caravan trade. When the caravans stopped all we had left was farming. Some people still raised mules and horses though, as they were needed to bring goods to market locally.

GK: How is tourism changing Shaxi?

Ouyang: Shaxi has been focused on sustainable development of its tourism industry in recent years. Right now there are only 30 or so guesthouses here, some are owned by local people, and others are owned by people from elsewhere. The common denominator is money, if you don't have cash you can't open a guesthouse.

GK: How do you feel about the arrival of tourism in Shaxi, do you think it's positive for the people living here?

Ouyang: Tourism is good for Shaxi's economy – it brings money here. If you want to do anything you need cash. How can I buy meat if I don't have any money?

I really enjoyed this. It dovetails nicely with the book I'm reading right now, "Forgotten Kingdom" by Peter Goullart. In the beginning of the book the author gives a nice and vivid description of journeying to Lijiang in one of these carvans during the 40s.

As a Chinese, I didn't know about Shaxi at all before reading this article. it really gives me a glimpse of a town which used to be so important a stop on the ancient Tea and Horse Caravan Route~