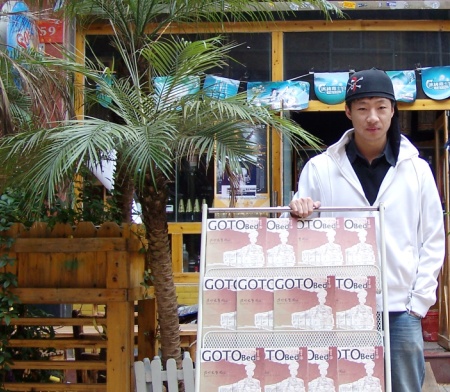 Competition from the internet, rising production costs, lower profit margins – there are plenty of factors that make it difficult for magazines to survive in today's marketplace.

As in most developed countries, China's mainstream magazines tend to feel more like vehicles for advertising and selling lifestyles rather than like labors of love. But around the country there are a handful of small local mags published by local youth who are trying to offer something different.

In March of this year, a group of eight twentysomethings joined the ranks of China's DIY print wave, which places more importance on having fun and offering an alternative to corporate media than making money – but that's not to say money is unwelcome. Their magazine, Go To Bed (Xixishui – 洗洗睡 – or "Wash Up and Go to Bed" in Chinese), is available in bars and restaurants throughout the city.

Go To Bed chief editor Yang Zhi (杨志) is a 21-year-old Gejiu native and undergraduate student at Yunnan Finance and Economics University. We recently spoke with him about the ups and downs of printing an underground magazine in Kunming:

GK: What drove you to decide to make a magazine?

Yang: It started because Hu Xinghua from Nashville Sound Bar was incurring promotion expenses every month. He thought that rather than spend money printing countless flyers it would be much better to make a magazine that embodies our spirit and focuses on arts and culture. Shi Zhi, who is also one of the bar's owners, is well-established in the media industry, and I've published a campus magazine at my university, so the three of us ended up clicking and started a magazine that reflects our interests.

GoKunming: Why did you choose the name Go To Bed for your magazine?

Yang: After deciding to do the magazine we decided to choose a name that really stood out, so we got our brains working on choosing the right name. We had a brainstorming session and just sat around writing possible names on paper, names like "Outside the Second Ring Road" 《二环之外》, "Inscribed Records" 《铭志》. Finally, when everyone'd had enough, it was already quite late and was time for everyone to crash. One of us said "Alright, let's discuss it again tomorrow, everybody wash up and go to bed!"

We were instantly inspired by this and we started thinking about the feasibility of calling the magazine something like Wash Up and Go to Bed, the more we said Xixishui (洗洗睡), the more it seemed to roll off our tongues. It seemed to express what we're all about: shrugging off difficulties and laughing at life.

GK: Who is your target readership?

Yang: Young people from 18 to 28 years old who have aspirations. You just need to be someone who enjoys ridiculing the difficult, mocking life and always being yourself. I feel our magazine is for everyone because we don't care about what's in fashion, but we do give the reader a look at the soul of the youth of China, Yunnan, and this era.

GK: What are some of the challenges of running a magazine?

Yang: The most difficult thing is raising funds. I'm a poor student and basically doing all I can to scrape up enough money to get by. Also, Nashville Sound Bar is in its initial stage as a business, so none of us have any cash.

Unfortunately due to our continual development of Go To Bed, we need to raise 15,000 yuan every month for expenses. This has led to rough going operationally, we can only rely upon our passion and we scour the city for sponsors and supporters. As we are a young publication, the process of raising funds is painful but in some ways fun.

GK: What about the magazine makes you feel like you're accomplishing something?

Yang: Spreading my own point of view is what gives me the greatest feeling of accomplishment – putting my work in front of other people who appreciate it. Also it feels good to be able to help young people who are persevering by presenting them to a public who will notice them – and moreover pay attention to them afterward. So, we help ourselves while helping others, this is what makes us feel like we're doing something.

GK: What's fun about your job?

Yang: The fun part of making a magazine is learning and understanding all kinds of things about this city, the people in it... the stories that get people excited. Furthermore, in taking on the opportunity to make this magazine it's made us realize that this city is full of some hardcore individuals that keep a low profile. More importantly, even though on the surface this city doesn't seem to be a very dynamic one, many people are driven by a strong passion as they do their thing.

The magazine has made us find our own kind of joy far from the noise and has also made us meet a lot of people with strong personalities who are working hard and pursuing their dreams. I think this is difficult to find in modern China. But we firmly believe that this can become a trend – in China we have an ancient saying: "A single spark can set a prairie ablaze." We feel strongly that through our efforts we can change the times we live in. If we're unable to change the times, we can at least change ourselves... we can exceed ourselves.

GK: What domestic or international magazines do you respect?

GK: How would you characterize the good points and the shortcomings of young Kunmingers?

Yang: The best thing about the youth in Kunming is they are sincere and down-to-earth. Their biggest shortcoming is summed up in one word: laziness.

Yang: Any and all young people on the street.

"What domestic or international magazines do you respect?
Yang: City Pictorial (《城市画报》) ...and FHM."

Just different opinion from different people, I think it's nice to see these kids are trying something in their life, instead of judgement, maybe we could clap a little.

My students benefit greatly from guest lectures by overseas lecturers, local business people, various experts and VIPs from both China and abroad. However Yang Zhi could well provide the spark that makes them realise they have within them all it takes to reach their individual goals.

PS Transport and hospitality arranged if he cared to spread a little inspiration.