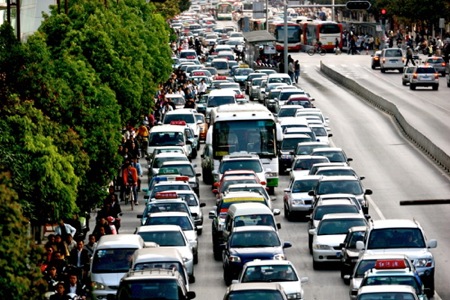 It will be business as usual on most Kunming streets on Wednesday.

Kunming will ban private cars from entering a handful of downtown streets for six hours on Wednesday, joining 125 other Chinese cities in observance of World Car Free Day, held around the globe every September 22.

It will be the third year in a row that the city has restricted private cars on September 22, but this year's event will have significantly fewer restrictions compared to the last two years—despite the happy coincidence that this year it lies on the first day of Mid-Autumn Festival vacation and fewer people will need to commute.

This year private cars will only be banned from entering the area around Green Lake Park and the sections of Beijing Lu and Dongfeng Lu that lie within the first ring road. The ban will run from 9am to 3pm. As has always been the case, bicycles, electric scooters, taxis and public buses will be exempt from the ban.

Last year the ban lasted from 8am to 8pm and applied to all streets within the first ring road.

This year's loosening of restrictions is part of a trend in Kunming, where it's been a rocky road for no-car days.

The city originally became a pioneer in no-car days in 2007 shortly after it celebrated its first World Car Free Day, which was considered such a success that the city started holding China's first monthly no-car days (无车日) on the last Saturday of every month.

It then expanded the scope of the no-car days in early 2008 with alternating bans on cars with license plates ending in odd and even numbers from operating inside the second ring road.

Though it might seem ironic that no-car days would be suspended in order to carry out road construction, completion of the second ring road presumably would allow cars to move more easily around the city's periphery on days when they were banned from the city center.

But the second ring road has been open for a year now and there has been no hint of the return of no-car days, other than the annual restrictions on September 22, participation in which is strongly recommended by Beijing.

Given Kunming's increasing embrace of a car-based transportation infrastructure the future of no-car days is unknown.

I'm still waiting for the subway - hope they can keep it clean and sanitary. And that's also probably one small reason why the no car day is still suspended - traffic around the construction zones is horrific.

but wouldnt having "no-cars" on the car free days, make the traffic around the construction sites lighter. After all, isnt that the point.?