By Colin Flahive in Travel on September 9, 2010 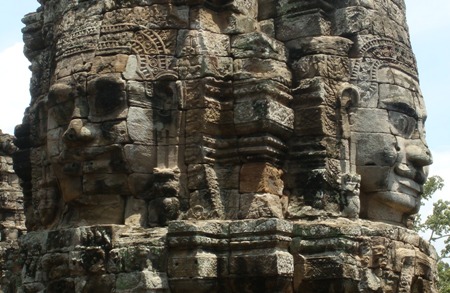 Editor's note: Kunming resident Colin Flahive recently visited Siem Reap, Cambodia, where he discovered a charming town full of little surprises. If you have a travel story you would like to share with GoKunming readers, please get in touch with us via our contact form.

Nearby Angkor Wat may get all the attention, but the fast-changing town of Siem Reap is a treasure in itself. Most travelers are in and out of Siem Reap in two or three days, missing out on the surrounding countryside, which offers a window on some of Cambodia's most vibrant Khmer culture as well as the tragedy that unfolded during the Khmer Rouge era.

Once the seat of the Khmer Kingdom, Siem Reap is now home to one of Asia's best café streets. A nice mix of live music and cuisines can be found along the aptly named Bar Street as well as the Alley, a narrow pedestrian road lined with restaurants and shops. Accommodation varies from simple and cozy to decadent and extravagant. At the heart of it all are a people of overwhelming hospitality who carry the scars of a tormented past.

Between 1975 and 1979, when the Khmer Rouge ruled, an estimated 10 million landmines were placed throughout the country. This resulted in the death of nearly 20,000 and the maiming of over 40,000. Today, one in every 290 Cambodians is an amputee. Many of Siem Reap's beggars have missing limbs or have been blinded by landmines. 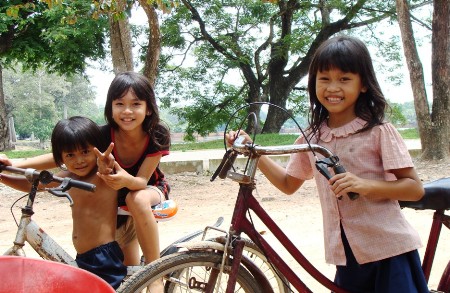 The positive impact of NGOs and non-profits is palpable throughout Siem Reap. Hospitals provide free health care to villagers, orphanages provide children with education and many tour agencies share profits with development programs. One example is Quad Adventure Cambodia, which offers tourists 4-wheeling adventures to the surrounding villages while using a portion of profits to support Chres Village Orphanage.

If you'd like to do more than just be a tourist, the orphanage welcomes volunteer teachers, particularly those willing to teach English, Korean, Japanese and Chinese. As Chinese are beginning to outnumber all other tourists in Siem Reap, many children are anxious to learn the language.

2468Apsara#http://en.wikipedia.org/wiki/Apsara# dance, an exquisite art form that all but disappeared during the Pol Pot years, can be attended nightly at many of the larger restaurants and bars in town. The revival of Khmer artisanship now provides the town's flourishing markets with traditional silks, sculptures, carvings and paintings. 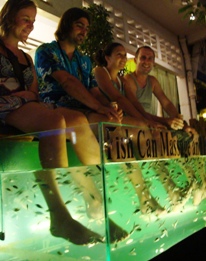 In addition to reviving older traditions, Siem Reap's tourism industry has created a growing number of niche businesses. The question, "Would you like a fish massage?" might catch first-time visitors off-guard, but these are actual fish that "massage" the feet. Tank stalls line Bar Street and the surrounding area for passers-by to hang their feet into a tank of water where little fish peck away at the dead skin on the heels and between the toes of the giggling customers. Twenty minutes cost US$1-3, sometimes including a shoulder rub or a free beer.

But it is outside of town, in the rice fields and in the small villages, where much of Siem Reap's richness lies. There you'll find interesting local foods, scenic dirt roads and many who truly may be the world's friendliest people. Be sure to allow yourself enough time in Siem Reap to take a bike out to the countryside or a boat through the floating villages of Tonlé Sap Lake. Considering all that Siem Reap has to offer, it would be unfortunate to leave having only experienced the Khmer culture of 1,000 years ago without appreciating the Khmer of today.

Getting there: Unfortunately, China Eastern Airlines has just discontinued its Kunming-Siem Reap route. Flights from Kunming to Phnom Penh are still operating, with Phnom Penh connected to Siem Reap by bus and ferry.

When I was living in Kunming from 08 - 09 I visited Siem Reap for 2 weeks and it was 2 of the best weeks of my life. There is so much to do for people of all ages and interests. I would recommend renting a taxi cab for a week, for a few extra dollars the the taxi driver will be your chaufer and he can take you to so many interesting places that are not in the travel guide. The Landmine Museum is also a must visit in and every donation is for a good cause.