Getting Away: Golden Temple 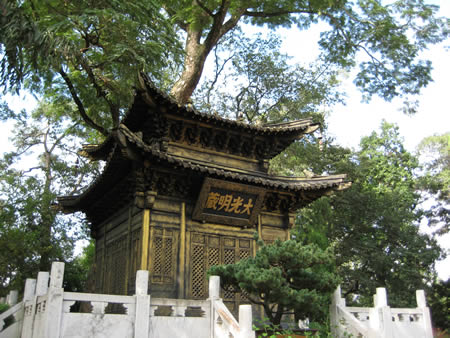 Looking down upon the city from atop a large hill in the northeast, Golden Temple (aka Jindian, 金殿) is one of the few places in the city where one can imagine Kunming as it once was.

First constructed during the Ming Dynasty in 1602, Golden Temple was originally built with more than 250 tons of bronze, or so says the official story on the back of the site's 30-yuan ticket.

For most people, Golden Temple became much more interesting in 1671, when it was rebuilt by the infamous general Wu Sangui (吴三桂), who is considered a traitor by some and a Machiavellian role model by others. 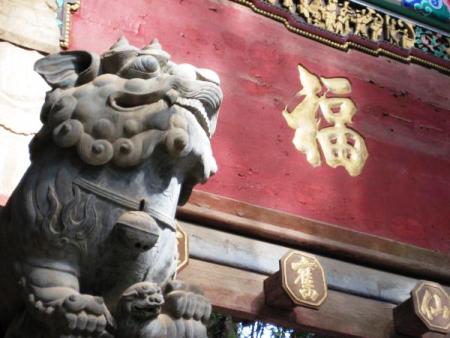 The story of how Wu Sangui ended up in Kunming deserves some background. When serving as a general under the Ming emperor in 1644, he dealt what many consider the crucial blow against what was left of the Ming when he opened the gate of the Great Wall at Shanhaiguan (山海关) in present-day Hebei, allowing Manchurian soldiers easy access to the territory that they would soon conquer and rule as the Qing Dynasty. 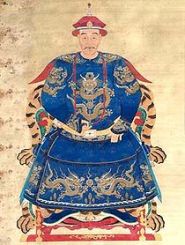 The Qing government rewarded Wu for his collaboration at Shanhaiguan by naming him "King of the Peaceful West" (平西王) and giving him control of Yunnan, a move that would eventually result in what military analysts today call "blowback".

Wu may have been thinking of career advancement when he opened the doors at Shanhaiguan, but as with many of China's more enduring stories, there is also a romantic angle.

While Wu was serving as a general under the Ming, rebel forces led by Li Zicheng (李自成) overran Beijing, resulting in the suicide of the Chongzhen Emperor and the establishment of the short-lived Shun Dynasty, with Li as its first and only emperor.

Li is believed to have run afoul of Wu Sangui when he took Wu's concubine Chen Yuanyuan (陈圆圆), one of China's legendary beauties, as a hostage to ensure Wu's loyalty. It is thought that Wu was so enraged that he decided to let the Manchus in and fight alongside them to remove Li's government.

While the new Manchu rulers of China were figuring out how to rule the vast Han territory they had acquired, Wu spent more than 25 years in Yunnan enjoying large subsidies from the Qing government, who considered him an indispensible partner in southwest China. During this time Wu also served as a go-between handling Qing-Tibet relations.

Some of the Qing funds may have been used to renovate Golden Temple, but Wu also anticipated an eventual clash with his Manchu masters, so he built up a substantial army and waited until then-emperor Kangxi recalled him to Manchuria in 1673 before declaring war on the Qing.

Wu quickly began expanding his territory, conquering Sichuan and Hunan, where in the present-day city of Hengyang he declared himself emperor of a new Zhou Dynasty. Shortly afterward he died in bed, passing power to his son Wu Shifan (吴世璠) who was defeated by the Qing after only three years of rule. 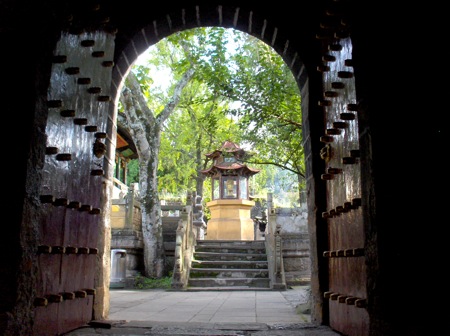 Getting back to Golden Temple, although the Wu Sangui story is not played up very much on the surface, it is undoubtedly one of the biggest attractions for Chinese visitors. Looking out over the vast Dianchi Basin below, it is well-positioned to watch the afternoon sun slowly drop behind the mountains to Kunming's west.

As a visitor, it is quite believable that Golden Temple has existed here for more than four centuries, but it is hard not to notice that many of the buildings in the sprawling compound are only a couple of decades old. According to Golden Temple's Baike page, the Kunming municipal government spent more than 8 million yuan, or around US$1 million at the time, on renovations to the complex between 1983 and 1991.

Upon entering the main gate of Golden Temple, visitors can wander through a Daoist compound composed of several peaceful courtyards and small shrines. One of the standout features of this part of Golden Temple is its diversity of plants. Tropical broadleaf bajiao trees mingle with tall evergreen plants, bamboo, and even gingko trees – during our visit a park employee was up in a gingko tree, knocking the gingko nuts off the branches with a long bamboo rod while a coworker collected them below.

Our late afternoon visit to Golden Temple involved plenty of leisurely wandering from courtyard to courtyard. Heading up the hill from the courtyard portion of the compound, things took on more of a leisurely vibe, with plenty of places to sit down and contemplate the land below. We imagined Wu Sangui looking out over his domain while sipping his tea (or baijiu) and thinking about the best way to tell the Kangxi Emperor to shove it. 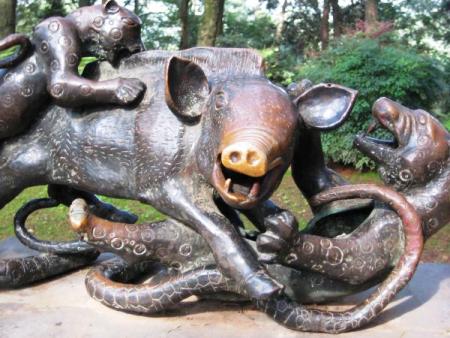 As we approached the top of the hill, we followed a path littered with pine needles and lined with recreations of some of the most notable bronze works to come from Yunnan. After passing a short stretch of food stalls, we arrived at the top of the hill, where the bell tower (钟楼) awaited us. 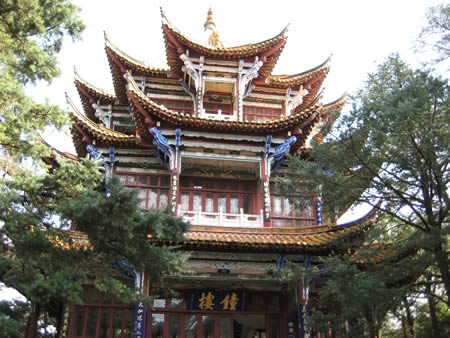 Four flights of stairs later, we were at the top of the drum tower, which appears to have been rebuilt during the last renovations, but nonetheless has a massive bell suspended from its ceiling. For two yuan visitors can ram a one-meter-long wooden fish into the much-smaller "Qianlong Emperor's Great Happiness Bronze Bell" that hangs in the doorway of one of the two small balconies open at the top of the bell tower.

Passing on the bell, we took in two very different sights, the green wooded hills to the northeast and the sprawling, hazy metropolis to the south, towering Xishan in the background the only thing that Wu Sangui would recognize of his old home. 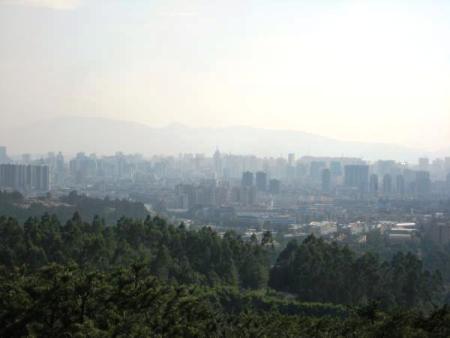 Getting There: Golden Temple can be reached by cab for roughly 25-35 yuan from downtown Kunming. It has a lower and upper entrance, both located off of the northern end of Chuanjin Lu. Its lower entrance is adjacent to a bus station that is the terminus of the number 10 bus route, which connects Golden Temple with Baiyun Lu, Yieryi Dajie, Jianshe Lu, Xiao Xi Men, and Nanping Jie. Entry is 30 yuan/person.

The Golden Temple is a Taoist temple, not a Buddhist temple.

This is true, thank you Able, corrections have been made.

As I known, The bell in bell tower is not Qianlong's bell, it is belong to yongle Emperor in MIng dynasty.(But that hangs in the tower now was rebuilt,the older one was destroyed).Yongle Emperor built his rule by bloody war.so he made yongle bells in many tempers all over the china in order to bless the death people .

the official name of the bell in Chinese was 乾隆吉祥钟, I doubt it has much to do with any emperors and is probably less than ten years... creative name though

I know the reason. the bell people can ram in your article is a small bell,and it is made less than 10 years as you said. I mean the real old bell in bell tower, it is very heavy,it's the third- big- bell in china. It was built near 600 years ago.vistors can't touch it beacause it is a real historical relic.I looked up the information about the bell .it is a Ming dynasty bell.

The best part of a visit to the Golden Temple is the alpine slide which can drag you half way UP the hill and later let you zig-zag DOWN at the end of your visit, Buy the ticket for this at the same time as buy your entrance ticket or you pay extra for it later..