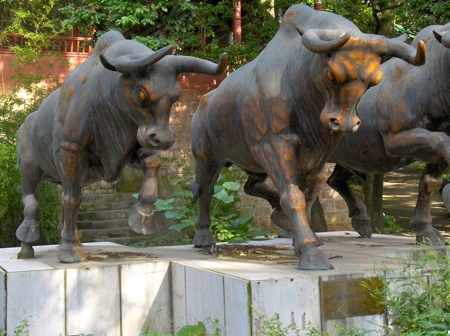 Saturday: Salvadors' sixth birthday party
Salvador's Coffee House celebrates six years in Kunming Saturday with half-priced coffee all day and free sangria from 8 to 9pm. Sangria will then be 5 yuan per large glass until close.

Saturday: Exhibition opening at Cat's Cradle
Cat's Cradle Café will have an opening for an exhibition titled "True Lie" by artist Mu Yuming (木玉明) on Saturday. The opening will begin at 2pm and the exhibition will run until September 10.

Saturday: Premier League and BBQ at Lazy Bones
Lazy Bones Pizza will be barbecuing steaks and hamburgers and showing football on the projector screens on Saturday. There will also be a beer special with six Crown beers selling for 90 yuan.

The football schedule is as follows: Blackburn Rovers vs. Arsenal at 7:45pm; Chelsea vs. Stoke City at 10pm; Manchester United vs. West Ham United at 12:30am (Sunday morning).

Saturday: Concert at TCG Nordica
"The Promise, a Lyrical Concert" at TCG Nordica on Saturday will be performed by an erhu, cello, guitar and piano quartet. The concert will begin at 8pm and cost 20 yuan for adults and 10 yuan for children.

Sunday: Michael Jackson tribute at Laowo Bar
Laowo Bar will have a tribute to Michael Jackson on Sunday in celebration of what would have been the singer's 52nd birthday. There will be a VJ on hand to play Jackson classics. The 10 yuan entry fee to the 7:30pm event includes a free bottle of beer.