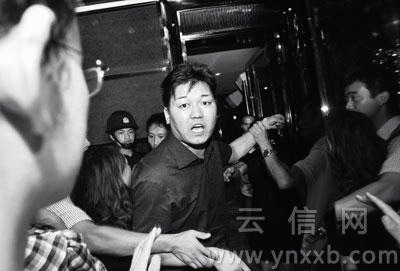 Prostitution crackdowns threaten Kunming's ability to develop and attract investment: that was the opinion of a man claiming to be a communist party member from Sichuan whose business meeting at a Kunming "entertainment club" was disrupted by a police prostitution raid last Thursday evening.

The unidentified customer (pictured above) berated police for bursting into Guandu District's Real Madrid International Entertainment Club (皇马国际娱乐会所) at 10pm on July 29 while he was in the process of negotiating a "project" in Kunming.

Photos and descriptions of the club collected from the internet reveal a large building encompassing lounges, a billiards room, karaoke facilities, and 50 private rooms spread across three floors.

After the raid uncovered suspected prostitution, police ordered the club to temporarily halt business and reorganize its operations. They also later reported that 68 suspects are currently being "educated through criticism" (批评教育). 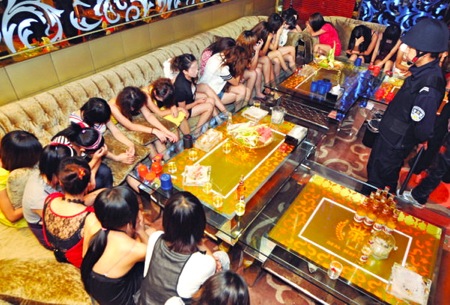 The self-proclaimed party member was not a suspected prostitution customer, but nevertheless made his displeasure at the police and media presence very clear:

"I'm a representative of the Sichuan People's Congress," a Yunnan Net reporter quoted the man as saying. "I came to Kunming to discuss a project, how I am I supposed to do that with all these police around?"

Despite being urged by police to move on, the customer continued, "Kunming's development depends on our chamber of commerce; your city leadership depends on us," possibly referring to Sichuan.

"I'm a party member," he then said. "Attracting investment isn't easy. You guys are influencing Kunming's development with your actions."

The man was eventually convinced to leave, but not before attacking a reporter and leaving him with a bloody nose.

Well perhaps Mr Sichuan People's Congress you'd consider investing in Kunming because the project is worthwhile and you'd get a suitable return on your investment and not because you'll be treated to "entertainment".

Police - don't arrest those pursuing the oldest profession in the world unless you have some way to get them into decent employment. Arrest the party members who think its acceptable to spend tax payers money on "entertainment"!

This guy is toast as soon as it gets pushed up to Beijing. Business should be discussed in the office - official party line. Things discussed OUTSIDE the office stink of corruption.

Well. Mr. Corrupt Party Member of the "Sichuan People's Congress", if that is true, and you are indeed doing tax-paid business, why not do it in the business office - and does it matter if the police are nearby if your business is legitimate?

Of course, we can't say anything because you were led there by your Kunming tax-paid cadres. Ho, hum. :-(

Clearly you people don't understand the importance of this man's job. It's not easy to come down to Kunming, be wined and dined, and engage in serious business, all in the company of scantily-clad female acquaintances! It's really SERIOUS BUSINESS. Being a Communist Party member is no walk in the park and takes some serious dedication. Do you think he likes wearing expensive watches and clothes bought with taxpayer's money? Do you think he really enjoys having a chauffeur take him everywhere he goes in an imported car most people couldn't afford with a lifetime of saved wages? Yes the new Audi is very nice, but to be honest the seats can be a bit uncomfortable if you have to sit for extended periods of time. Think, people!

no, he is berlrusconi in the making and he is the future leadship material.
maybe, just zar**** hahhahah