January 15, 2021 "We are looking for a part-time English teacher. Requirements: - Have experience in teaching 3-15 years old children; - Have ability to prepare y …"
Living in Kunming Tom69 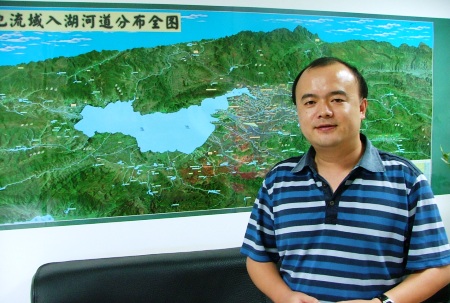 Like every city in China right now, Kunming is a massive construction zone. And just as in those other cities, one of the main questions on people's minds here is where the city is headed. Jian Haiyun (简海云) is one of the few people in Kunming who has a good idea of what Kunming should look like in the near future. As deputy director of the Kunming Urban Planning and Design Institute (KUPDI) - a state-owned consultancy that works on urban improvement in Kunming, Yunnan and even Myanmar and Vietnam - Jian has spent the last decade working on projects aimed at making Kunming more liveable, a recent example being the revitalization of the Jinzhi River, which snakes through downtown. GoKunming recently spoke with the Kunming native at his office:

GoKunming: Almost all of old Kunming has been demolished, has this affected the soul of the city?

Jian Haiyun: The changing and rebuilding of a city is pretty much inevitable, it's like a body's metabolism. But at the same time, a city's history should be preserved so that there is a continuous and complete narrative. The wholesale demolition and rebuilding of the city in past years has undoubtedly caused serious damage to the city's historical and cultural heritage - it's emasculated the city's soul and appeal. But now more and more people are recognizing the importance of protecting the city's history, and active steps have already been taken to do so, such as an investigation into historical buildings in the Dianchi Basin and the preservation of such buildings.

GK: How have the municipal government's development priorities changed over the last decade?

Jian: Over the last 10 years or so, Kunming has experienced its most rapid period of development. Some of the city's developmental goals have stayed consistent over this period - goals like accelerating development, bolstering the city's strength, raising the city's status and so on. But there have also been some changes, like gradually moving away from only considering the speed of development to focusing on higher quality development, especially in terms of protecting Kunming's environment, history and culture, plus the greenification of public spaces and the improvement of public services such as schools and hospitals. There is a hope that while the city's economy develops, the quality of life of the city's residents will also improve.

GK: What challenges does Kunming need to overcome in order to become a more liveable city?

Jian: Kunming has been blessed with an extraordinary climate. To make it more liveable, there will need to be a massive effort made to address the city's environmental pollution, to address the degradation of Dianchi Lake, to open up more public green spaces and to upgrade rail transportation, the BRT bus system and other modern forms of mass transit. The city's pedestrian and cycling infrastructure will need to be improved and more efforts need to be made to provide housing, medical care, education and welfare for middle- and low-income residents of Kunming. The city's unique culture should be explored and promoted.

GK: Kunming's climate is ideal for strolling or cycling, but it's becoming increasingly difficult to enjoy these activities within the city. What future do you see for Kunming's pedestrians and cyclists?

Jian: This is an undeniable problem, but the municipal government and urban planning department are actively pushing several pedestrian and cycling projects forward. I believe that in the future, pedestrians and cyclists will get more respect and there will be more of an infrastructure in place to encourage people to walk and cycle throughout the city.

GK: Can Dianchi be saved?

Jian: Dianchi can definitely be saved, and it must be saved, just as in the cases of Lake Zurich in Switzerland, Lake Biwa in Japan or Suzhou Creek in Shanghai. But this will require a long-term, massive, sustained and unrelenting effort on everyone's part.

GK: Do other cities in Yunnan look to Kunming as a role model for urban development, or do they tend to take their own paths?

Jian: As the capital of Yunnan, Kunming has influenced other cities in the province in many ways. But now Lijiang, Dali, Tengchong, Yuxi, Mengzi, Ruili and other cities are increasingly taking a path that is more suited to their local realities.

GK: You've been to many cities around the world to observe their developmental successes and failures, what cities have given you the deepest impressions?

Jian: A lot of the foreign cities that I've visited have given me deep impressions primarily for their unique local conditions, like the harmony of Chiangmai in Thailand, the gardens of Singapore, the sustainable development of Curitiba in Brazil and the historical preservation of Rome.

GK: As a Kunming native, what is your personal hope for the future of the city?

Jian: I hope Kunming can continue to be unique and maintain its special cultural identity. I hope it can preserve its beauty, liveability and welcoming character without blindly seeking things simply because they are big or new. And I want the city to offer its residents a more pleasant life and a sense of pride while offering visitors an upbeat city that they enjoy visiting and are happy to return to again.