Ten years after China launched its 'Go West' development program (西部大开发) aimed at boosting economic development in western China, there is no question that much has changed in this corner of the country.

Including Yunnan, the 12 administrative regions comprising the Go West program constitute 71.4 percent of mainland China's total land area, but they are only just beginning to have greater access to the fruits of China's economic expansion. After the implementation of Deng Xiaoping's economic reforms in 1979, the economic gap between western China and the rest of the country widened rapidly, raising concerns in Beijing of eventual social instability in the west.

By 1999, then-Chinese Premier Zhu Rongji appointed current Premier Wen Jiabao to head a group to draft a plan for narrowing the economic disparity between China's west and the rest of the country, with an emphasis on raising the west's economic output. The plan was formally put into action in 2000.

What has happened to Yunnan since then?

In terms of economic output, Yunnan's gross domestic product (GDP) has more than tripled in yuan terms – in 2000 provincial GDP was 195.5 billion yuan, compared to last year's total of 616.8 billion yuan. If applying 2000 and 2009 dollar exchange rates to those numbers however, Yunnan's GDP growth becomes even more dramatic, nearly quadrupling from US$23.6 billion in 2000 to US$91.0 billion in 2009.

Across Yunnan, growth in the mining, hydropower, pharmaceutical, real estate and retail sectors has propelled the provincial economy's growth, but it is undoubtedly government investment in Yunnan's transportation infrastructure that has been the most important catalyst for Yunnan's transformation into an increasingly relevant economy.

Just 10 years ago, getting around Yunnan by car or bus generally meant white-knuckled rides on poorly built highways – today the province is covered in a new highway network that allows farmers to get their produce to faraway markets while also helping more goods reach remote rural locations. Yunnan has also built up its road connectivity with Vietnam, Thailand, Laos and Myanmar.

In the last decade, new airports have been built in Lincang (2001), Wenshan (2006) and Tengchong (2009). Internationally, Kunming now has direct air links with Dubai, Kolkata and Kathmandu.

As for trains, a new Dali-Lijiang train line was launched last year, and much progress has been made on Yunnan's segments of the trans-Asian railway network that will link Kunming and Singapore via Vietnam, Laos, Myanmar, Thailand, Cambodia and Malaysia.

These improvements in Yunnan's transportation infrastructure have been the driving force behind fast-growing trade relationships with neighboring Sichuan, Guizhou and Guangxi within China, but it is as an international trade hub where Yunnan has the most potential.

Yunnan's total trade with foreign countries in 2000 was US$1.8 billion. In the first two months of this year the province racked up $1.49 billion in foreign trade, putting it on pace for $8.94 billion for the year – roughly five times the 2000 total.

What's next?
The launch of phase one of the China-ASEAN Free Trade Area earlier this year is already helping Yunnan approach its goal of becoming the mainland's gateway to Southeast Asia. The powerful National Reform and Development Commission has also recently ratified a document entitled "Guiding Ideas for Supporting Acceleration of the Construction of Yunnan Province into China's Open Bridgehead to the Southwest"《支持云南省加快建设我国向西南开放桥头堡的指导意见》, suggesting that Yunnan may have finally won its battle with Guangxi to become the official gateway to Southeast and South Asia.

Complementing the free trade area and other policies will be hardware upgrades including Kunming's new airport, which is expected to be one of the largest in the country and will reportedly have an increased number of direct flights to Southeast Asia, South Asia and the Middle East as well as rumored direct flights to Australia and North America. 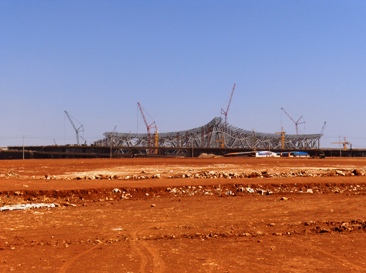 Kunming's new airport (pictured above) will have a massive impact on Yunnan's foreign trade, but so will the trans-Asian railway project that, if completed, will send people and goods between Kunming and major cities including Singapore, Kuala Lumpur, Bangkok, Phnom Penh, Yangon, Vientiane, Hanoi and Saigon. The Yunnan government is also pushing hard for an agreement to create a new 'Eurasian land bridge' in the form of a rail line linking Shenzhen with Rotterdam.

As for domestic rail, construction has already begun on a new high-speed rail line between Kunming and Shanghai that will reduce travel time from 36 hours to just 10 hours. The line is expected to be operational by 2015.