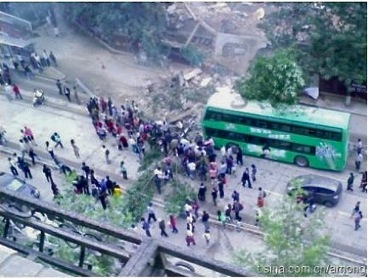 At least five people were injured, one critically, when a seven-meter-high wall collapsed into Dongfeng Xi Lu at about 11am this morning. The wall was part of the Yunnan Hotel (云南饭店), which is currently undergoing demolition. The hotel is located on Dongfeng Xi Lu near Wacang Nan Lu in downtown Kunming. 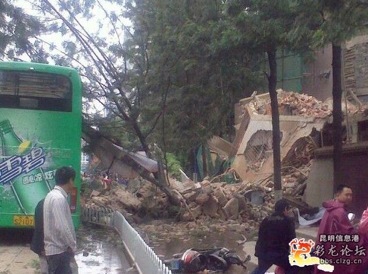 Eyewitnesses reported hearing a loud crash and seeing a cloud of dust. After the dust dissipated a pile of rubble was visible spread across the near Dongfeng Xi Lu bicycle lane and lodged against a public bus in the street. The collapse and ensuing emergency response blocked traffic on the major east-west thoroughfare until about noon. 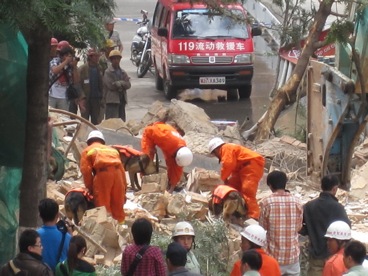 There is no word yet if anyone was killed, but media are reporting at least one serious injury resulting in hospitalization. Photos also showed police using dogs to comb the rubble pile. Another reported injury was a passenger on the bus whose injuries were not life-threatening.

The hotel, which first opened in 1962 and is a familiar landmark to many Kunming residents is pictured below prior to the start of demolition. 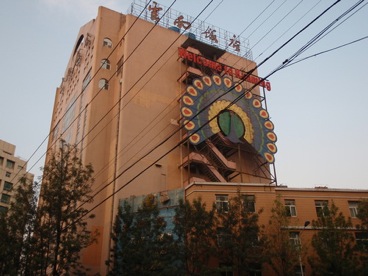 Update
As of late Thursday morning a 47-year-old woman remained in critical condition at the Yunnan People's Number Two Hospital. The victim was caught beneath the crush of falling debris and suffered injuries to most of her body. She has suspected damage to her internal organs and is facing amputation of a leg.

Four other people have also been admitted to the hospital with less serious injuries.

One victim surnamed Chen who suffered minor head injuries wondered aloud to a Kunming Information Hub reporter why there had been no barriers to keep pedestrians further away from the demolition area. He then looked at his watch, which had been destroyed in the accident. "It's completely ruined," he said. "I bought this new in Hong Kong for 10,000 yuan. They have to compensate me for this."