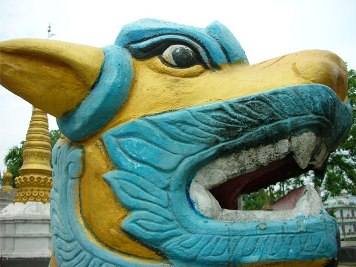 The city of Ruili in Yunnan's far west is a finger of land jutting into northeastern Myanmar. A large part of its identity and character comes from being a border town: gangs of young businessmen on the prowl, pungent Burmese smokes, bustling jade markets, whispers of drugs and shouts of prostitution.

The ethnic make-up of the city is one of the most diverse in China: Han Chinese, Burmese, Thai, Jingpo, Dai, Uighur and a smattering of other ethnic minorities compose the population here.

Yet, unlike some bigger cities in Yunnan, ethnic diversity in Ruili means more than Casio-keyboard music, contrived dancing and colorful hats.

Walking down any palm-lined street, you see Burmese men wearing traditional longyi (a sarong-like dress with a knot tied in front), women with pearl-colored face paint smeared on their cheeks and forehead or Asian-looking people with genuine blond hair.

On store signs, there are rolling lines of Burmese script written under the Chinese characters. In some communities and villages around Ruili, amidst hidden stupas and banana trees, Chinese is not spoken at all.

Aside from the ubiquitous Burmese jade, one can find Vietnamese vodka, Indian sandalwood incense and a variety of sexual enhancements and medicines shipped in from Thailand. This includes "Sea Dog Pills," a "strengthening" formula in a red box adorned with a satisfied-looking Harry Truman.

Trade with Myanmar opened in the 1990s and just as it has transformed Ruili's population into a Southeast Asian melting pot, it has also brought some less-welcome visitors.

Ruili is considered the primary point of entry for heroin and yaba (a meth-like drug) coming in from Myanmar. Although the town's reputation as a dangerous drug-filled border town has been fading since a 1997 police crackdown, it is still a major local issue.

That said, many people we spoke with in Ruili don't seem to consider drugs particularly menacing.

"I don't see it much," said one shop owner. "Every city has problems like this; it's the same as any other."

A rickshaw driver from Hubei province shrugged off the drug question as he pedaled us down the nighttime street. "Drugs, yes..." his voice trailed off for lack of interest. Then, he looked back with a conspiratorial grin.

"But look at all these beautiful xiaojies!" he exclaimed, gesturing to a row of bored-looking girls sitting on couches under green lights, touching up their make-up.

Ruili can be reached by sleeper bus from Kunming or by flying to Mangshi and hiring a car for the 1-hour ride over.

i want to find the owner o this guesthouse in Ruili, He is from Burma old friend of mine.
could you send me on my personal email : michszt@hotmail.com
My name is Michael i am french

I would like to know someone from Ruili. I live in the USA.