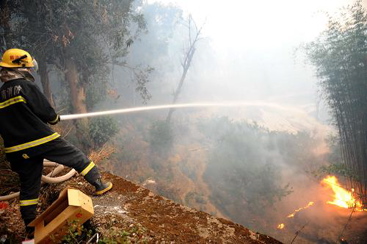 As a plume of eucalyptus-scented smoke blew across Kunming Saturday afternoon, firefighters were rushing to save historic Bamboo Temple (筇竹寺) from going up in flames.

The forest fire, which threw up a large gray cloud of smoke over the hills outside of the city, was first reported on Yu'an Mountain to the west of Kunming on Saturday at about 11am.

Bamboo Temple, the history of which extends at least to the Yuan Dynasty, sits near the top of Yu'an Mountain and was directly in the path of the spreading flames.

Authorities sprang into action and firefighters spent hours smothering the blaze before declaring it under control shortly before midnight.

The firefighting team, which included a mixture of up to 1,500 forest rangers, firefighters, police, and military personnel, managed to keep the fire away from Bamboo Temple until it was extinguished. Nevertheless, monks living at the temple were evacuated as a precaution.

The prospect of Bamboo Temple burning may have prompted an unusually robust response from authorities: it is one of Kunming's more well-known sites and home to an impressive collection of 500 painted clay figures that were created by a Sichuanese sculptor in the late 1800s, during one of the temple's many rebuilds.

The sculptures consist of idiosyncratic portrayals of Buddhist arhats, the term for a person who has attained nirvana. In Mandarin arhats are called luóhàn (罗汉).

Yunnan's record drought, which remains a large problem despite a few rainstorms in the past month, has meant that forest fires in the areas surrounding Kunming have been more numerous than usual this year.

This latest fire serves as yet another reminder that drought-parched forests are primed to go up in flames from a single exhaust spark or cigarette butt.