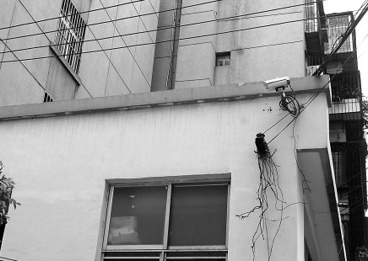 Mass surveillance, a widespread phenomenon in China, has impacted a Kunming resident in an unlikely way: an anonymous man called the Yunnan Net news hotline on Tuesday to report that a security camera was making it difficult for him to urinate.

A reporter sent to Heping Cun discovered the problem to be a video camera that was recently installed on a wall above the urinal in the men's room of a public toilet.

The camera does not actually point toward the urinals, but is used by local police to monitor an alley running next to the public toilet. Nevertheless, it is a source of consternation among some men who have trouble urinating in its presence.

Although the original caller remains anonymous, the reporter soon found a man surnamed Cai who commiserated with the caller's micturation situation.

"As soon as I see it I become uncomfortable," said Cai. "I feel like it's looking at me and I can't urinate."

An elderly female bathroom attendant said there had been a number of complaints about the camera.

Severe cases of "stage fright" are considered to be a psychological disorder known as paruresis.

Damn things inhibit us all from being who we are - which, I think, is the point.

But both males and females will urinate in the street in broad daylight. Go figure.

But not all males and females will.

Girl Power Night (Pin Up Party) at The Turtle Bar!