Meandering down the once-mighty Mekong

The Mekong River, known in Yunnan as the Lancang River, after the former Lao kingdom of Lan Xang, is one of the world's greatest rivers. Millions of people live on its banks and depend upon the 'Mother River' for their livelihoods.

The recent shortage of rain in Yunnan and northern areas of Laos and Thailand has had a noticeable effect on the Mekong. On a recent trip through Jinghong in southern Yunnan and on to Luang Prabang and Vientiane in Laos, we took a firsthand look at the state of the river. 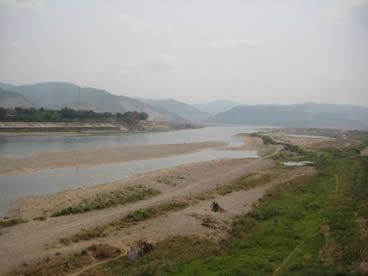 In Jinghong, we were pleasantly surprised: the river was more than the trickle we'd heard it was. The flow was confined to the eastern side of the channel, with the shallower western side exposed, providing a convenient promenading area for those wanting a little privacy. Passenger boat travel on this section of the river was suspended.

On a positive note, the flow of the river was fast and strong, no doubt providing a healthy environment for our finned friends within.

The last year has seen comprehensive redevelopment of the west bank of the river on either side of the Xishuangbanna Bridge, with the creation of the picturesque Binjiang Park and the less picturesque neon bar strip that accompanies it.

We'd last passed through Jinghong in the autumn of 2008, at the end of the rainy season - here's a comparison photo taken at that time: 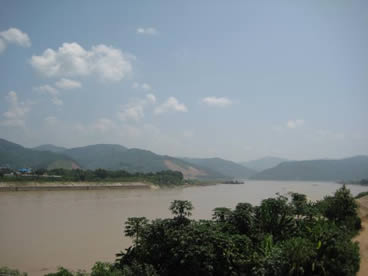 In Luang Prabang, we found it harder to escape the fact that the river was severely depleted. There were large exposed sandbanks, several metres of terraced farming within the riverbed, and a river level gauge marked as high as 22m that was currently reading around 3m. 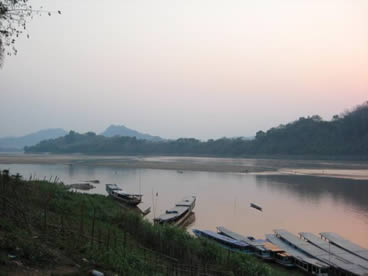 Passenger boat transport was still running from Luang Prabang, but only upriver to Pakbeng and Huay Xai. A ticket salesman explained that the river flow was currently too slow for a downstream passenger service to be commercially viable. 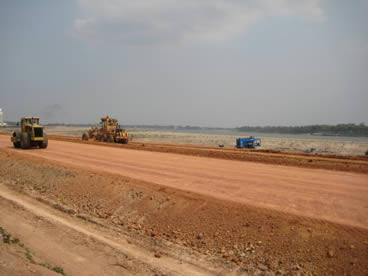 A stroll down to the riverfront in Vientiane might leave one confused. You can see across the riverbed to Thailand, but at first sight, there just seems to be a desert in front of you. The river is still there, a slender ribbon across on the Thai side of the riverbed, still a big river, but an enfeebled incarnation of itself.

The river has shrunk so much that a project is now underway to expand the riverside park out into the riverbed - a tacit admission that the river is unlikely to return to its mighty former self. Heavy machinery hums away pushing and packing and prodding the riverine sand. The existing smaller park was completed in 2001; the new expanded park is due to be completed in October 2010.

Off the beaten rack: Finding real souvenirs in Laos