Far from the center of power in Beijing and covered by rugged terrain, Yunnan has long provided ideal conditions for corrupt officials to try and get away with stealing from the public.

The harsh penalties meted out to Li and Hu have likely deterred some officials in Yunnan from engaging in graft, but they have not cured the province's corruption problems. Two recent cases, one in Wenshan and one in Dali, are reminders that bribe-taking is still a serious issue in Yunnan.

Zhao Shiyong (赵仕永), the former party secretary of Malipo county in southeastern Yunnan's Wenshan prefecture, was sentenced to 18 years in prison on April 18 for accepting five million yuan in bribes since 2005. His 10 million yuan house suggests that authorities have not uncovered the full extent of his bribe-taking.

The amount of bribe money Zhao reportedly took was the largest ever uncovered for a county secretary anywhere in China. It is also in sharp contrast with the extreme poverty of Malipo, where the average annual income is only 1,879 yuan (US$ 275).

Zhao earned the nickname "reimbursement king" because he submitted claims and received government reimbursement for goods ranging from high-end televisions to everyday items including socks and soap.

Zheng Yali, Zhao's mistress and an employee of the Wenshan government, was sentenced to two years for corruption and stripped of 500 thousand yuan in assets. 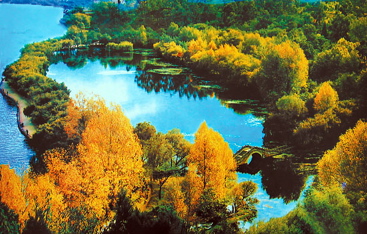 In the second case, locals in Xiaguan, Dali, have been wondering for years how developers managed to get authorization to build a luxury villa development that has now spread across Erhai Park on the south shore of Erhai Lake. In the process, the developers filled in a picturesque two-hectare lagoon named Lover's Lake (pictured above) that was popular among Xiaguan residents.

Investigators announced last Wednesday that Huang Yonghua (黄永华), lieutenant governor of Dali, has been expelled from the party and fired from his post for allegedly taking bribes from real estate developers, including those behind the Erhai Park project, worth 2.23 million yuan.

Huang is also accused of embezzling more than 85,000 yuan of public funds.